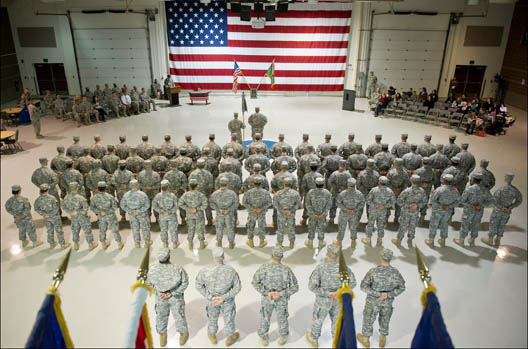 Military officers behaving badly have been making headlines. But, rather than a sign of widespread corruption, the fact that they’re being caught and disciplined is an indication of how seriously the profession takes its ethical responsibilities.

From massive cheating scandals with Air Force and Navy nuclear officers and Army National Guard recruiters to generals and admirals abusing the perks of their office or sending wildly inappropriate emails detailing the things they’d like to do with female Members of Congress, the string of reports have many seeing an ethical crisis in the American armed forces.

They prompted TNI contributing editor Paul Pillar to ask, “What’s going on with military officers?” The Pentagon’s senior leadership is apparently asking themselves the same thing. Earlier this month, the DoD’s press secretary put out word that Defense Secretary Chuck Hagel is “concerned about the health of the force and the health of the strong culture of accountability and responsibility that Americans have come to expect from their military” and “generally concerned that there could be at least at some level a breakdown in ethical behavior and in the demonstration of moral courage.” Friday, the other shoe dropped, with Hagel himself announcing that he would appoint a senior general as an ethics czar and that “It will be an individual who is experienced in not just this building, but I want someone who understands the outside, who understands the pressures of combat, the pressures of curriculums and testing, and who has a good, well-rounded background in command.”

General Martin Dempsey, chairman of the Joint Chiefs of Staff, agrees, proclaiming that, “It is not the war that has caused this. It is the pace, and our failure to understand that at that pace, we were neglecting the tools that manage us as a profession over time.” This was Pillar’s instinct as well. He observed that “The U.S. armed forces are coming off more than a decade of continuous involvement in overseas warfare, with the particular wars in question not having gone especially well” and noted “One thinks, by way of comparison, of the years immediately after the Vietnam War, another overseas war that did not go well and a time when aberrant conduct in the military such as drug abuse was high.”

Regardless, Dempsey says, “This challenge didn’t accumulate overnight, and it won’t be solved overnight.” Further, Dempsey added, “Acts of crime, misconduct, ethical breaches, command climate, and stupidity each require a distinct solution. But the overall solution is attention to who we are as a profession.” Hagel echoed this, declaring, “Ethics and character are absolute values that we cannot take for granted. They must be constantly reinforced.”

While the secretary and chairman are of course right, it’s worth noting that America’s military officers have for generations been selected for and educated in the ethical standards of their profession. Before even being selected for officer training, candidates must pass extensive background checks and be eligible for a security clearance. Even minor brushes with the law and experimentation with recreational drugs can be disqualifying. Cadets are given extensive training on professional ethics, the law of war and the Uniform Code of Military Justice. This education is continued throughout their careers, with reinforcement and expansion through basic and advanced courses and then taken to broader context at staff and war colleges. Further, throughout their careers, their efficiency reports rate them on integrity, with anything but the highest marks an assurance they won’t be promoted.

Few professions have anything like this level of screening and training for character. The only analog that occurs to me, the Roman Catholic priesthood*, is instructive.

Like military officers, Catholic priests are required** to have a bachelor’s degree and extensive follow-on education. Typically, priests have a master’s degree in divinity, with extensive coursework in ethics and moral philosophy, prior to ordination. The American military, by contrast, maintains extensive professional education for its officers throughout their careers, with most getting master’s degrees some time in their second decade of service.

The overwhelming number of officers and priests alike are credits to their chosen calling, performing exemplary public service and upholding the highest moral standards. In both cases, however, some fall short; some, spectacularly so. And, because the standards are so high and the uniforms of their profession make them so identifiable as a group, the public scrutiny that comes from these failures is not only high, but reflects on the whole.

Two observations come from the comparison.

First, it would seem that no amount of screening for character or training in the rules of moral behavior is sufficient to ensure that every single member of a very large group lives up to the standard. Some people will do the wrong thing even when they’re trained to know what the right thing is. Some will be able to rationalize their bad behavior. Others will simply prove weak in the face of temptation. Others still may simply be hard-wired for evil.

Second, while there are certainly exceptions, the instinct of the military brass has been to identify and punish the transgressors, even if doing so embarrasses the profession in the public eye, while the instinct of the Catholic hierarchy was to try to hide the problem to protect the image of the Church. Why Church acted as it did is complicated and, in any case, beyond my expertise. But the opposite reaction of the military profession is worth highlighting.

Our military culture demands accountability, with little tolerance for failure.

General James Amos, the Commandant of the Marine Corps, is under fire for being perhaps too enthusiastic in going after Marines accused of sexual assault and urinating on the corpses of Taliban militants. While his instinct was right in both cases—seeking to uphold the highest standards of his profession—he may well have overstepped his bounds, violating the rules against command influence over the military justice system.

In his new book, former defense secretary Robert Gates shared his frustration that General Stanley McChrystal didn’t fight to keep his job after an embarrassing Rolling Stone article quoted the commander of US forces in Afghanistan and his staff making disparaging remarks about President Obama and other senior civilian leaders. Gates remarked that, “I wish Stan had given me something to defend him with.” Instead, “It was like he was at West Point again and it was just: ‘No excuses, Sir.'” Gates gathered that McChrystal “didn’t want to throw his staff under the bus” and instead took full responsibility, thereby handing “his opponents in the White House the ammunition to get rid of him.” But that shouldn’t have been surprising. While nearly four decades steeped in the military culture, going back to his plebe year, wasn’t enough to keep him from stepping across the line, McChrystal instantly recognized that he’d violated his profession’s code when he saw it in print. Falling on his sword was not only required by that code but a way of going out with honor.

One of the reason so many of these scandals are coming to light is the fact that the chain of command actively encourages reporting of transgressions. There are all manner of channels for even low-ranking personnel to report bad conduct without fear of reprisal.

That’s how a recent incident in which three Navy admirals were rebuked for a questionable trip to London came to light. An “anonymous whistleblower” reported the trip to the Navy Inspector General, saying it may have been technically legal but violated the “Washington Post Test,” that is, that it would be embarrassing if reported in the press. The transgression according to, ironically enough, the Washington Post: “Over seven days, the U.S. admirals visited the British Ministry of Defense for two hours, spent half a day at the U.S. Embassy in London and visited several British Navy installations. At the same time, they did take along their wives (although not at taxpayer expense), arranged a leisurely visit to Bath and didn’t do any business over the weekend.”

Now, the “Washington Post Test” is a good one. As both leaders of people who put their lives on the line for their country and stewards of the taxpayers’ money, flag and general officers ought to be above reproach, avoiding even the appearance of impropriety. But it’s worth noting that they’re being held to a much higher standard than not only their civilian commander-in-chief, the Members of Congress with oversight responsibility over the armed forces, and their private sector counterparts. Presidents, Congressmen, and corporate executives routinely mix business and pleasure, going on trips to nice locations with minimal business to do and taking their families along.

Indeed, The Pentagon’s General Counsel’s Standards of Conduct Office regularly publishes  The Encyclopedia of Ethical Failures, a huge volume cataloging in minute and sometimes humorous detail indiscretions committed by uniformed and civilian employees of the Defense Department. Aside from the sheer stupidity of some of the perpetrators, what quickly stands out is that DoD employees are often punished quite severely for conduct that wouldn’t draw a second glance in the private sector.

The nuclear test scandals, especially the Air Force’s, are both more serious and more indicative of a more widespread problem. There, a zero-defects mentality created perhaps unreasonable pressure to excel on the exams and led to a culture where cheating came to be seen as justified. The practice was apparently longstanding and widely known by the community leadership. But, once it came to light, the Air Force and Pentagon senior leadership immediately went to work to fix the problem. Among the solutions? Encouraging more bottom-up reporting of problems.

It’s a good thing, indeed, that the military’s civilian and uniformed leadership is taking this recent spate of ethical lapses seriously. Constant vigilance and scrutiny is good for the profession. But it’s worth keeping in mind how ingrained in the culture they already are.

*Several other churches have similar requirements. Roman Catholic priests are highlighted here both because of their large number and because of the parallel ethical crises.
**There are circumstances under which is possible to be commissioned without a bachelor’s degree, but they are rare.