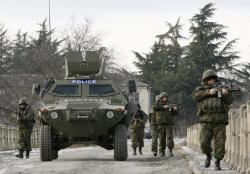 Four months after the hot phase of Russia’s war on Georgia, Russia continues to violate the European Union-brokered ceasefire agreements of August 12 and September 8.

Notwithstanding, the EU on December 2 resumed Partnership and Cooperation Agreement talks with Russia, which it had suspended September 1 in the wake of Russia’s August assault on Georgia.

The consequences of such strategic autism are potentially disastrous not only for Georgia, but also for the integrity of EU diplomacy and the geopolitical interests of the West.

Russia agreed to withdraw its forces from areas of Georgia adjacent to the separatist territories of Abkhazia and South Ossetia and to return to pre-August 7 lines.  It has done neither.

Inside the two territories, withdrawing to pre-August 7 lines means that all but the peacekeepers that were in those territories before the war must leave.  Instead, Russia occupies Upper Abkhazia—also known as the Kodori Gorge—which was under Georgian control before the war.  Furthermore, it is establishing Abkhazia and South Ossetia as heavily armed Russian bridgeheads on the Georgian side of the Caucasus Mountains.

Russia’s imperialist message is as clear as its strategic objective in occupying Georgian territory.

The ink of Russian President Dmitry Medvedev’s signature on the second ceasefire agreement was barely dry when his defense minister declared that Russia would not withdraw to pre-August 7 lines.  Instead, said Anatoly Serdyukov, Russia would garrison 3,800 troops in each occupied Georgian territory.

On November 19, Russian Chief of General Staff Nikolai Makarov announced that about that number already manned Gudauta air base and Ochamchire naval base in Abkhazia, and that a force of similar size manned bases in Java and around Tskinvali in South Ossetia.

However, the Russian troop strength inside Georgia is already much higher.  Russian forces in South Ossetia are building three new bases designed to garrison over 10,000 troops.  In neighboring Akhalgori, December reinforcements have boosted the number of Russian troops beyond 3,000.  Meanwhile, Russia is transforming eastern Abkhazia—particularly the Gali and Ochamchire Districts—into a platform for highly mobile infantry forces.  During December, hundreds of armored vehicles rolled off trains that traveled along the rails that the Russian Army repaired for “humanitarian” purposes just before last summer’s war.

As the November 14 EU-Russia Summit loomed, French Foreign Minister Bernard Kouchner explained his eagerness to resume the partnership talks with Russia.  “We suspended negotiations,” he told Kommersant, because we wanted Russia to comply with the agreement on the withdrawal of its troops; and that has been done.”

However, just as Stanley Baldwin could not wish away Germany’s burgeoning Luftwaffe, Europe cannot wish away the Russian occupation of Georgia.

Today, Russian forces already garrisoned in Georgia can quickly sever the country’s East-West rail and road lifelines, seize the port of Poti and the nearby Supsa oil terminal, overrun Mtskheta—the birthplace of Georgian Christianity—and roll into the capital of Tbilisi.

There are roughly three scenarios that could develop.  First, Russian spetsnaz forces could mount a series of terrorist attacks to destabilize and provoke Georgia.  Second, Russian forces could settle in as an enduring threat to Georgia and the East-West Corridor.  Third, the Kremlin could order another wanton attack on Georgia to overthrow Mikheil Saakashvili, Georgia’s democratically elected president.

As with the August attack, the third scenario would no doubt unfold after Moscow conjures up some Georgian provocation.  There are two situations that Moscow could easily develop into pretexts for another attack on Georgia.

In Abkhazia—which Moscow recognizes as independent—the separatist parliament on October 24 claimed 850 square kilometers of the neighboring Georgian region of Mingrelia.  It would not require much imagination in the Kremlin to manufacture a pretext for war out of a Georgian effort to repulse a separatist grab for yet another bit of Georgian territory.

In Perevi, Russian forces quit the village with much fanfare on December 12.  “We very much welcome this move,” said Hansjorg Habe, Chief of the EU Monitoring Mission (EUMM) in Georgia.  Within hours, however, they returned.  On December 13, the EUMM “verified that Russian troops have reoccupied the Perevi checkpoint in Georgia … and even deployed a considerable number of troops in and around the village.”

Again, it would not require much imagination in the Kremlin to spin a yarn of Georgian aggression out of some clash between the Georgian police and the Russian Army on one of its circular maneuvers around Perevi.

The point is that European acquiescence in Moscow’s contempt for the EU-brokered agreements is buttressing a tinderbox in the South Caucasus more volatile than the status quo ante bellum.

And Putin holds all the matches.  “As far as Russian support is concerned,” he said on a December 3 television call-in show, “you know that cooperation agreements have been signed with South Ossetia and Abkhazia and this is the best guarantee that Russia is not going to leave these regions.”

In the face of this, Europe has not the courage to insist upon compliance with the ceasefire agreements, much less to press for real conflict resolution in the much-touted Geneva talks or any other venue.

In the short term, this may reignite the South Caucasus tinderbox.  In the medium term, it will devalue the EU diplomacy that French President Nicolas Sarkozy worked to strengthen.

As America altogether abdicated its superpower role last summer, Sarkozy’s leadership and the EU’s quick dispatch of over 200 observers to Georgia were big steps forward for the EU’s Common Foreign and Security Policy.

However, if it now emerges that Sarkozy’s signature upon the ceasefire agreements was written with delible ink, the Czech presidency of the EU—which holds office for the first half of 2009—will have been handed a diplomatic mess of historic proportions.  This will dash the EU’s diplomatic credibility, diminish European leadership, and split the EU.

Lithuanian President Valdas Adamkus warned, “Resuming [EU-Russia partnership] talks now would expose the EU’s weakness for all to see.”  Russia, he continued, will “once more trample over European values.”

That this went largely unnoticed in all the commentary about Russia’s August attack on Georgia attests to the acute strategic autism that has seized the west.

The seeds of this conflict were sown with the collapse of the Soviet Union and the restoration of Georgian independence.  Those seeds germinated, however, in 1994 when Azeri President Heidar Aliyev concluded “the deal of the century” for Western exploitation of Caspian Sea hydrocarbon resources.

“Russia cannot dictate this question,” said Aliyev.  In 1999, Azerbaijan, Georgia, and Turkey signed the agreement that led to the Baku-Tbilisi-Ceyhan (BTC) oil pipeline—on the margins of the same conference at which Russia agreed to withdraw its military from Georgia.  Putin and his cronies never forgot that connection.

BTC bypasses sensitive areas, affording Western access to Caspian Sea and Central Asian energy and offering a choice of customers to the landlocked producing states.  Parallel to BTC, natural gas flows from the Caspian Sea’s Shah Deniz field through the South Caucasus Pipeline to the Turkish city of Erzurum, bound for consumers throughout Europe.

Together, these energy conduits form the critical mass required to promote and sustain a broad East-West commercial corridor.  In this regard, the Kars-Tbilisi-Baku Railroad will be a multi-purpose carrier, bringing commercial development along its route and beyond.

Whether by pipeline, rail, road or water—through the Turkish Straits or via the Danube and Rhine Rivers—we now have the prospect of firmly linking the Caspian Sea and the Eurasian heartland to a North Atlantic trading system that extends from Batumi and Ceyhan in the East to Houston in the West.

And with commerce come people, so the East-West corridor will also become a pathway for ideas, perhaps the most important prospect of all.

It was the prospect of opening up the Eurasian heartland that truly provoked Russia’s attack on Georgia.  Call it what you will—a geopolitical clash, a clash between history and post-history, a clash between 19th Century imperialism and 21th Century globalization—the Kremlin aims to trample any significant Western reach into the Eurasian heartland.

In August, Moscow tried to topple Georgia’s pro-Western president, smashed some infrastructure, stalled Georgia’s march toward NATO, and fired warning shots around one of the pipelines.

Now it is waiting for that peculiar Western blend of myopia, greed, and pusillanimity to constrict the East-West corridor.  If that fails, from its well reinforced bridgeheads in Abkhazia and South Ossetia, Russia is prepared to trample pipelines, railroads, and dreams in a matter of hours.