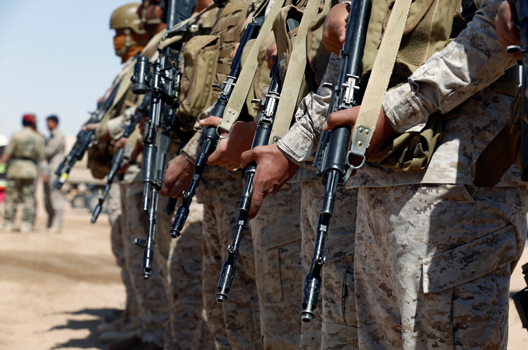 US President Donald J. Trump and Saudi Crown Prince Mohamed bin Salman’s shared animosity toward Iran is apparently getting in the way of ending the war in Yemen that has claimed the lives of thousands of civilians and put millions more on the brink of starvation.

While Yemen was very much on the agenda when Trump met the crown prince at the White House in Washington on March 20, there was scarce mention following their meeting of any productive effort to end the war in that country.

“I just don’t see between these two men in charge that they’re going to be able to do the right thing [in Yemen,] which is to put diplomacy first,” said Nabeel Khoury, a nonresident senior fellow with the Atlantic Council’s Rafik Hariri Center for the Middle East.

“Saudi Arabia and the United States, the two big powers that can actually make things happen in Yemen, are looking past Yemen,” he added.

In 2015, Houthi rebels, loyal to former Yemeni President Ali Abdullah Saleh and apparently backed by Iran, took over the capital Sana‘a ousting President Abdrabbuh Mansour Hadi. Keep in mind that the Sunni kingdom of Saudi Arabia and the Shi’ite theocracy of Iran have a historic regional rivalry. Saudi Arabia next stepped into the conflict leading a military coalition with the goal of reinstating Hadi.

The Saudi-led military campaign initially consisted of airstrikes against the Houthi rebels. However, more than 13,500 civilians have been killed in the war—a majority of them by the airstrikes. The United Nations has described the situation as “the worst manmade humanitarian crisis of our time.”

The war in Yemen has become a quagmire for Saudi Arabia, but it has also become an unwelcome distraction for MbS who is eager to focus the world’s attention on his agenda of economic and social reform.

MbS, who also serves as defense minister of Saudi Arabia, defended Saudi actions in Yemen while blaming the Houthis for firing missiles at Riyadh and for blocking aid and thereby creating a humanitarian crisis.

“I can’t imagine that the United States will accept one day to have a militia in Mexico launching missiles on Washington DC, New York and LA while Americans are watching these missiles and doing nothing,” MbS said in an interview with CBS’s 60 Minutes.

For MbS and Trump, “the suffering of the Yemeni people is beside the point,” said Khoury, adding, “they don’t care.” What the two leaders discussed in their meeting, however, remains unclear and both Khoury and Dov Zakheim, an Atlantic Council board member, were critical of the Trump administration for this lack of transparency.

When considering the range of issues at stake related to Yemen and other regional concerns, and the leaders in charge of their resolution, Khoury said, “between the two of them, I don’t know whether to laugh or be scared.”

Zakheim said this is in part because the Trump administration shares MbS’ antagonism toward Iran. Zakheim served as the under secretary of defense (comptroller) and chief financial officer for the US Department of Defense from 2001 to 2004.

Khoury and Zakheim participated in an Atlantic Council phone briefing on March 21 that was moderated by Rachel Brandenburg, director of the Middle East Security Initiative at the Atlantic Council’s Scowcroft Center for Strategy and Security.

On the same day as Trump met MbS, the US Senate blocked a war powers resolution designed to end US involvement in the war in Yemen. Democratic senators brought the bill to the floor, but the Republican Senate, at the urging of US Defense Secretary James Mattis, struck it down.

“I don’t think Congress is going to pass any kind of war powers resolution, regardless of what party is involved,” said Zakheim, adding, “there won’t be a real push that forces the administration’s hand.”

However, he said, having the Congress raise the issue is going to give MbS the opportunity to diminish the Saudi role in Yemen.

According to Zakheim, MbS, whose agenda is dominated by consolidation of power and social and economic reform in the kingdom, does not want to find himself mired in the war in Yemen for much longer.

The first step to ending the war in Yemen, according to Zakheim, is to bring Iran to the table. “You’re not going to get a diplomatic resolution [in Yemen] until the fighting is close to being stopped,” which will not happen “unless the Iranians are willing to play ball,” he said.

According to Khoury, “the United States should exercise some leadership here in making that happen.”

For now, there appears to be no dialing down of the animosity toward Iran in Riyadh or Washington. The Trump administration shares Riyadh’s deep-seated distrust of and disdain for Tehran. Trump’s opposition to the Iran nuclear deal has further strained the relationship with Tehran. Then there is the inflammatory rhetoric. MbS has described Iran’s Supreme Leader Ayatollah Ali Khamenei as “the new Hitler” of the Middle East.

The crown prince is “young, brash, and doesn’t have an adult in the room to counsel him on Iran,” said Khoury. “I don’t see MbS discussing these issues in [a] balanced and thorough way,” he added.

Ultimately, “between the United States and Saudi Arabia, there doesn’t seem to be much they can do to strategize on Iran,” said Khoury, adding, “it’s mostly posturing.”

Yemen was not the only item on the agenda for the Trump-MbS meeting. Other regional issues, such as the attempt to broker a settlement between Israel and Palestine, were also discussed.

“The Saudis… and the United States are inching closer to some kind of arrangement between Israel and the Palestinians,” according to Zakheim. However, he said, there have been a number of “hiccups” in the process, including Trump’s decision to move the US embassy from Tel Aviv to Jerusalem completely disregarding Palestinians’ claims on East Jerusalem as the capital of a future Palestinian state. MbS’ father, Saudi King Salman, had warned Trump against relocating the embassy.

What this has done, said Zakheim, “is make it more difficult to push the Palestinians and the Israelis toward a deal.”

Though US-Saudi cooperation on regional matters remains an outstanding issue, “strategically, economically, any way you look at it, Saudi Arabia is an important friend to have,” said Khoury. Outside of geopolitics, MbS and Trump also discussed a deal on US arms sales and funding opportunities for Vision 2030, MbS’ economic and social reform plan for the kingdom.

According to Khoury, economic cooperation “is what Trump wants to focus on and what he displayed on television so happily, pointing to the weapons sold and bought.”

When Trump visited Riyadh in 2017, he promised $100 billion worth of arms deals with Saudi Arabia. The deal agreed upon on March 20 amounted to about $25 billion, said Zakheim.

MbS will continue his tour of the United States over the next two weeks, visiting New York, Boston, Houston, and Silicon Valley in California, among other destinations to pursue further investors for Vision 2030.