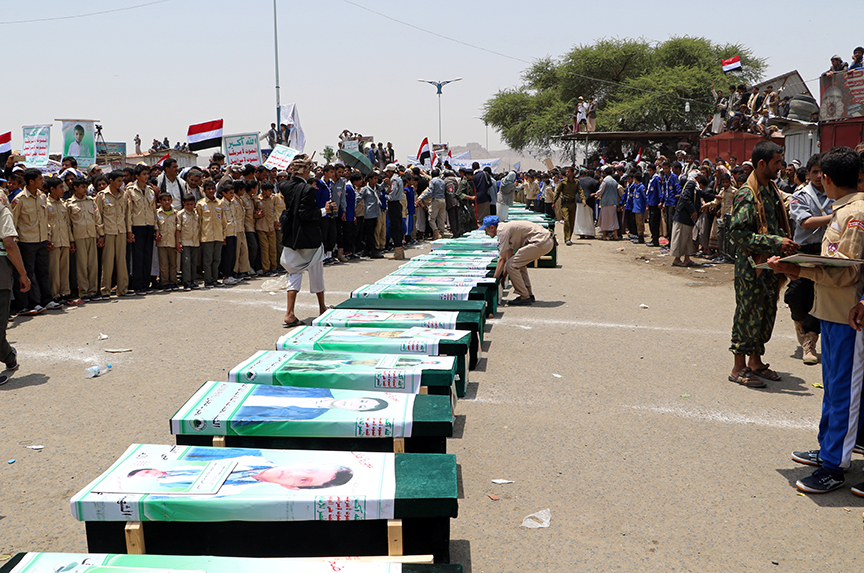 Officials in US President Donald J. Trump’s administration have repeatedly described the ongoing conflict in Yemen as a proxy war between Iran and Saudi Arabia, hence justifying the United States siding with a country that many US officials view as “our strong ally” against Iran.

Ironically, the Yemen policy of Trump’s predecessor, Barack Obama, was also Iran-centric, lending the Saudi-led coalition vital logistical and intelligence support in order to get grudging support from Riyadh for his nuclear deal with Iran.

Both administrations have been guilty of looking at Yemen solely through the prism of Iran policy. In both cases, Yemen has suffered the consequences.

In an August 23 tweet, the US Mission to the United Nations commented on a photo depicting a meeting between a Yemeni Houthi delegation and the secretary general of Hezbollah in Beirut. “This meeting b/w Hezbollah & Houthi leadership shows the nature of the regional terrorist threat. Iranian proxies in Lebanon & Yemen pose major dangers to peace & stability in the entire Middle East. The int’l community should be taking notice of this & be very concerned,” the tweet said.

In court-room parlance, the US Mission to the United Nations is leading the witness (its listeners and readers in this case).  Its assumptions are far from proven and not necessarily linked to the conclusions it draws.  Rising above the moral one-upmanship, let us posit that both sides to this conflict, nay all sides, have selfish intentions and are committing war crimes against civilians and killing and starving children. If this war is to end, and with it the daily death and destruction of the Yemeni state and its people, the two main protagonists—the Houthis and the Saudis—must stop vilifying one another, get back to serious talks, and take the necessary steps to deescalate the conflict and eventually end it.

It is worth reminding ourselves that the conflict has national, regional, and international aspects.  Iran has become an issue at the regional and international levels, but it was not involved, and remains so to this day, in the internal Yemeni struggle for power.

Internally, the now-defunct national dialogue of 2011-2012 never led to a firm handshake on a power-sharing agreement between principal domestic powers: the Houthis; the former ruling party, the General People’s Congress; the former opposition Islah party; and the Southern Movement or Hirak with all its components.

Filling the void left by the late Yemeni President Ali Abdullah Saleh’s ouster from power in 2012 remains the crux of the problem in Yemen. It is also the cornerstone of any overall peace plan for the country. A strong and sensible national figure has yet to appear and appeal to all militia and political leaders to gather for the purpose of hammering out a true national pact that would not only guarantee them a role in a future government, but also offer a compromise on their long-term policy fears, hopes, and preferences. To be sure, such national figures exist in and outside Yemen, but they would need international backing to propel them into the limelight and support their quest for national unity. With all due respect to the United Nations Special Envoy for Yemen, Martin Griffiths, his job belongs to a Yemeni not to an outsider, no matter how well intentioned.

Regionally, one has to confront the two-ton bear (real or otherwise) sitting in the living room: Iran. Saudis have complained about Iran meddling in Yemen for the past decade.  Ironically, Saleh—who allied with the Houthis in 2015, then later withdrew from that alliance, and was eventually assassinated by a Houthi sniper on December 4, 2017—did the same when he started the six-year war against the Houthis in 2004, insisting that Iran was behind the Houthi successes on the battlefield.

In both cases, while I was at the US Embassy in Sana‘a we searched for evidence of the wolf at the door and found nothing but empty slogans and precious few actual contacts. To be sure, that situation changed in 2010 when the Saudi air force intervened to help Saleh against the Houthis.  Iran’s involvement increased again when the Saudi-led coalition launched a war to stop the Houthi advance on south Yemen after they took over Sana‘a in 2014. Just as with the wolf-at-the-door parable, Iran took an interest and started helping the Houthis, albeit not very effectively given the US military presence in the Gulf.

Regardless of the merits of the Iran argument, bugaboos have to be confronted since virtual and/or partially true fears can cause just as much insecurity and unpredictable responses as the real thing. Stoking those fears—as Israeli and US hawks have been doing—is the last thing regional and international players should do.  It’s a dangerous game anywhere, but particularly in the volatile Middle East.  Iran and Saudi Arabia are the two regional super powers engaged in a cold war and competing for regional supremacy in the Gulf and beyond.  Yemen is the one place where this cold war has actually stoked the flames of a hot war, and the dangers of an all-out conflagration are quite real.

For all of the heated rhetoric coming out of the Trump administration, it is doubtful that the United States (especially the Pentagon) wants another ten-year war in the Middle East on its hands.  Cooler heads (and one has to believe that there are a few in Washington) must offer guarantees where necessary and help Saudi Arabia and Iran achieve a regional modus vivendi, ultimately an agreement on the dos and don’ts along the lines of what kept the Cold War cold between the Soviet Union and the United States for more than fifty years.

Finally, internationally: political realities and lust after financial gain have dictated the policies of the big powers, trumping (as it were) moral and legal imperatives.  Concerns over dying children, the spread of disease and famine—not to mention terrorism—have been shunted aside in favor of lucrative arms deals and enticing investment opportunities in desert mirages.  The United States and the United Kingdom bear the large share of the responsibility here to be sure. Both have supplied arms and effectively taken sides in this conflict instead of mediating an end to it. China and Russia, instead of offering diplomacy and assisting in finding compromise solutions, have been waiting in the wings hoping to replace the United States and the United Kingdom as principal suppliers of arms in the Gulf.  Indeed, both China and Russia have taken steps in that direction.

In short, none of the veto-wielding Permanent Five members of the United Nations Security Council that have the ability to impact war and peace decisions in the Middle East have prioritized what the United Nations has been predicated on since its inception. Stoking regional fears while waiting for one side or the other to impose itself by force is as immoral as it is futile and self-defeating. The wolves at the door are only growing in number and fierceness and their threat will be felt far beyond Yemen.

The challenge confronting true advocates of peace—international human rights organizations, civil society associations and champions in Yemen, the United States and the United Kingdom—is as great as it is frustrating. Pressure from them, in the end, is where the opportunity lies to turn things around.

Image: The coffins of victims of a Saudi-led coalition airstrike were lined up as mourners attended funerals in Yemen’s northern province of Saada on August 13. Forty children were killed in the August 9 airstrike on a school bus. (Reuters/Naif Rahma)