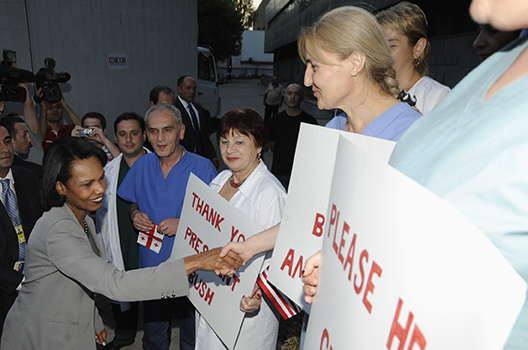 Ten years ago, Russia invaded Georgia, burning and ethnically cleansing the villages of the Tskhinvali region and occupying and recognizing the regions Abkhazia and South Ossetia. Moscow’s immediate objective was to limit the sovereign right of Georgia to resist the corrupt, backward, and technologically obsolete Russian political and economic system, and, instead, join the transatlantic political, military, and economic alliances of advanced economies. The invasion followed the April 2008 NATO Summit, where Georgia and Ukraine were given a commitment, but no actual mechanisms and timeframe to become members of NATO. The Russian Federation saw this as a window of opportunity to prevent the process.

Since the collapse of the Soviet Union, the Russian Federation has attempted to control the countries in its neighborhood at all cost and punish those countries who resist Moscow’s will. In 2008, the United States and the West did not do enough to deter Russian aggression – this mistake must not be repeated.

Russia has fully succeeded in preventing its neighborhood from turning fully westward. While Georgia is successfully advancing in its efforts to meet NATO standards and serves as one of the most capable and loyal allies in NATO military operations around the world, membership discussions are no longer on the table. In a sense, NATO and its leading European members awarded Russia for its bad behavior by accepting the Russian demand to keep Georgia out of NATO.

The limited Western reaction to Russian aggression in Georgia gave Moscow an impression of Western impotence. Russia started a more aggressive push for the renegotiation of the post-Cold War world order, trying to receive Western approval for Russian supremacy over the sovereign rights of the countries in its neighborhood. The perception of Western weakness led Russia to its next aggressive move – the annexation of Crimea and challenge to the stability of Ukraine and all of Eastern Europe.

But the cost of the inadequate Western response to the Russian invasion of Georgia in 2008 has consequences beyond Georgia and Ukraine. It has lasting impact on European security and US strategic interests not only vis-à-vis Russia, but also vis-à-vis China, Iran, and other potential strategic competitors of the United States. It is becoming customary again for larger powers to challenge the sovereignty of smaller neighbors in the vast area stretching from Eastern Europe to the Middle East and the South China Sea.

Georgia now faces a constant security threat from Russian forces stationed about fifty miles from the capital, Tbilisi, and about a mile away from the strategic railroad, pipeline, and highway infrastructure that serves a major international trade route and gives the United States and its European allies strategic access to Central Asia. The United States invested significant political and financial capital in opening these routes, and the development of the infrastructure there. Today, not only Russia, but also China, is establishing its controlling interests in wider Central Asia, threatening the concept of shared access to resources, markets, and transit infrastructure.

Frequent abductions and violations of the human rights of Georgian citizens – including their rights of practicing religion and accessing education in their own language inside of the Russian controlled territories – create physical security concerns and put constant pressure on stability in Georgia. As long as the killings, abductions, and human rights violation go unanswered by the international community, Russia will continue to humiliate Georgia. The public relations message from Russia is clear to Georgians: we do whatever we want and your Western friends have no guts to challenge us.

In order to reverse that message, the United States and NATO should take a much more proactive position in helping Georgia, as well as Ukraine, improve their defensive capabilities raising costs for Russia for additional territorial advancements and aggression. Georgians understand that until realities change they should not expect direct military help from their allies, but they have every right to expect more military equipment and training to be able to defend themselves, and with that, to defend the interests of the allies in the region. After all, this is what Georgians were doing for millennia – being on the frontline and defending the Greco-Roman, European civilization. From this perspective, the sale of Javelin anti-tank missiles, as well as the training of the Georgian military to improve territorial defense capabilities, are right steps by the Trump administration. This trend needs to continue and deepen.

On a parallel track, the United States needs to strengthen diplomatic and political efforts to support Georgia at any bilateral discussion with Russia, as well as at multilateral forums. The process of balancing Russia in Georgia should include other global and regional powers: the EU, Turkey, Japan, South Korea, India, and others. No aggressive actions of Russia against Georgia and its citizens should go unanswered. Russia needs to be constantly reminded about its violation of the French-mediated ceasefire agreement of August 12, 2008. This issue needs to be a part of the pre-conditions for Russia for any process of easing sanctions imposed in 2014 and thereafter.

The US Congress has a special role to play to support the sovereignty and independence of Georgia. Legislation (similar to DETER Act, S. 2313), that sanctions Russia, or any other country who conducts aggression against sovereign countries, would send strong warning signal to any potential aggressor, including Russia. Congress also needs to quickly adopt the Georgia Support Act, H.R. 6219, introduced by co-chairs of the Georgia Caucus Ted Poe (R-TX) and Gerald Connolly (D-VA).

In addition to the US strategic interests in the region, Georgia represents a special case of successful US investments in reform policies and democratic development. Georgia has the potential to evolve into a democratic country where traditional values co-exist with a successful innovative free market economy and good governance. This is not an easy process and there are significant internal and external challenges, but if successful, Georgia may become a role model for other countries in the region and beyond.