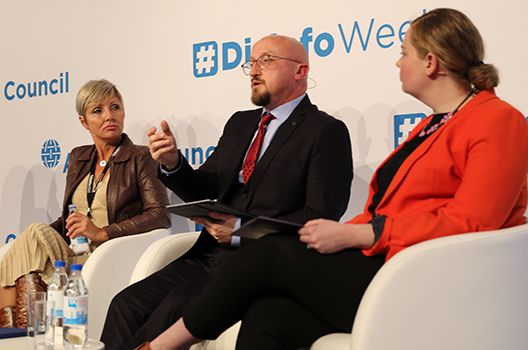 As democracies around the world struggle to counter online disinformation, the developing democracies of the Western Balkans “have been hit by this new wave of disinformation being much less prepared or resilient than Western societies,” according to Jelena Milic, director of the Center for Euro-Atlantic Studies in Serbia. The region, which saw devastating conflicts in the 1990s following the breakup of Yugoslavia, has been increasingly targeted by foreign-backed and homegrown disinformation in recent years, made worse by deep public mistrust of governmental institutions.

Milic and other regional experts discussed the rise of disinformation in the region as part of the Atlantic Council’s Disinfo Week event series, which brought together government officials and counter-disinformation researchers for four days on discussions in three European cities (March 4 in Athens, March 5 in Madrid, and March 7-8 in Brussels).

Serbia and other Western Balkan countries are particularly vulnerable to fake online information, Milic explained at the session in Brussels on March 7, because they don’t “have a long experience living in a society with a democracy, rule of law, or independent media.” The media community is especially weak, Milic argued, as its legitimacy continues to be tarred by the role it played in fomenting the conflicts of the 1990s and its slowness to respond to inroads by Russian actors. “They have failed to recognize, to see, [and] to report that the Russian elephant marched in,” Milic said.

Adnan Huskic, president of the Center for Election Studies in Bosnia & Herzegovina, agreed, saying that “when you don’t have… properly developed media systems in your country that are supposed to provide an unbiased and professionally ethical journalism… then we have a huge problem.” The absence of a strong media makes it easier for political elites to use their own disinformation to maintain control, he argued, especially as political checks and balances remain elusive throughout the region.

Laura Brown, a public affairs officer and spokesperson for the US Embassy in North Macedonia, explained that the lack of trust in political institutions is what makes the region such fertile ground for disinformation. “A lot of disinformation that we see plays on those narratives [of untrustworthy institutions] and tries to erode trust further in the country,” she said. Even seemingly politically neutral fake news, such as false stories about the dangers of vaccines, can “[increase] the level of anxiety in the society as a whole and it makes the people feel like the government is doing nothing to help them,” Brown said.

In North Macedonia specifically, Brown reported that waves of disinformation began appearing online after December 2016 parliamentary elections saw the ruling party lose its control of the chamber. As parties jockeyed to form coalitions, disinformation trying to delegitimize the election and alleging foreign support for opposition parties was pushed out across social media.  These campaigns were expanded once Zoran Zaev, the prime minister of what was at the time known as the Republic of Macedonia, and Greek Prime Minister Alexis Tsipras reached a deal to change the former nation’s name to North Macedonia in June 2018. As voters went to the polls to approve the name-change deal, Brown said that she saw “an extraordinarily complex, organized, and toxic amount of disinformation that dominated about 99 percent of the social media conversation.”

Milic warned that Russian-coordinated disinformation campaigns have already caused damage in Serbia and could be expanded. The Russian outlet Sputnik “is very devious,” Milic said, as “their editor-in-chief presents Sputnik in Serbia as Serbian media,” rather than disclosing the outlet’s Russian origin. Milic reported that Sputnik has already pushed a fake story alleging that spent uranium in the country is currently causing a cancer epidemic. Milic worries that both Russian and Chinese-based disinformation could expand as the 20th anniversary of NATO’s bombing campaign in Yugoslavia approaches while Belgrade continues sensitive talks with its neighbor Kosovo.

Moving forward, Brown said that governments—both in the region and in the West—should not react by becoming more “slow and clumsy” than they already are. She worries that “we second guess ourselves [and] we second guess our stories we have to tell,” while wasting “a lot of resources and a lot of time on monitoring and response.”

Rather than obsessing over every fake story that comes out, Brown suggested that policy makers should focus on “what a Euro-Atlantic future means” for the region, which is a “really powerful message that we have…and at the end of the day [that message] can be more powerful than all of the ugly attacks that we see.”

Image: From left, Director of the Center for Euro-Atlantic Studies Jelena Milic, President of the Center for Election Studies Adnan Huskic, and Laura Brown, a public affairs officer and spokesperson for the US Embassy in North Macedonia, speak at the Atlantic Council Disinfo Week event in Brussels, Belgium on March 7, 2019.