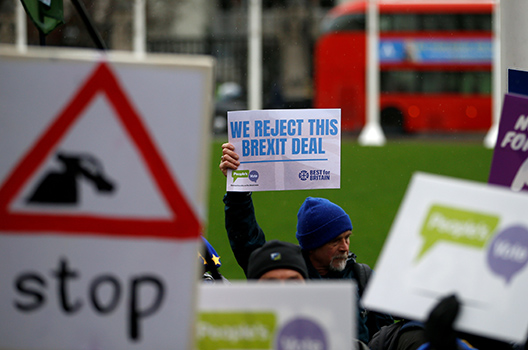 Britain was plunged into political chaos on March 12 after Prime Minister Theresa May lost a key parliamentary vote to take the country out of the European Union on terms agreed with the European Commission last November.

The immediate consequences of her stunning defeat—by 391 votes to 242 votes—are predictable. But what happens after two further votes in the next two days is much harder to assess. Right now, Britain could be heading for a general election, for an internal Conservative Party coup against the prime minister or for a further referendum on whether Britain should abandon its effort to quit the EU.

What is clear is that May’s authority is shattered beyond belief—and that the divisions within the country on Brexit are getting deeper every day. The prime minister has twice been defeated by unprecedented margins in her efforts to secure parliamentary approval for her deal. She has already had to concede to her own party rebels that she will not lead the Conservatives into the next general election; now she may have to concede that she cannot lead them at all and that someone else must take over.

On March 13, Parliament will vote on another key motion aimed at ruling out any exit from the EU without a deal. Speaking after her humiliating defeat, May said that she would proceed with this vote, that there would be a free vote, and that she herself would vote against leaving without a deal.

That also makes it highly probable that in a key vote scheduled for March 14 May—who has for almost two years insisted that Britain will leave the EU on March 29—will also vote in favour of asking the EU for an extension to give Britain more time to work out what should happen next.

But then these are unprecedented times. The vote prompted Vince Cable, leader of the Liberal Democrats, to ask the speaker of the House: “Can you identify a single case in history, say since the American War of Independence, when the prime minister has been twice defeated and continues with the same policy?”

Once the House of Commons has agreed to seek an extension to Article 50, the mechanism that set the March 29 departure date, the most likely prospect in the next few weeks is that Parliament will finally get to hold a series of indicative votes aimed at assessing the mood of the House with regard to such options as continued membership of the EU Single Market, participation in a customs union with the EU, or a second referendum on whether Britain should press ahead with Brexit or simply remain a member of the EU.

A commitment to hold such votes should provide sufficient justification for the EU to agree to an Article 50 extension. But even this cannot be taken for granted. A spokesperson for European Council President Donald Tusk, speaking after the March 12 vote, said: “Should there be a UK reasoned request for an extension, the EU27 will consider it and decide by unanimity. The EU27 will expect a credible justification for a possible extension and its duration. The smooth functioning of the EU institutions will need to be ensured.”

At this stage, it is far from clear that there is a majority in the House for any particular outcome or formula. This is perhaps the most compelling argument for thinking that the next chapter in Britain’s tortuous Brexit drama will be a general election.

Opposition Labour Party Leader Jeremy Corbyn declared “it is time for a general election” as he castigated the prime minister over her defeat and called for a Brexit agreement that would include a “negotiated customs union, access to the (single) market and protection of rights.” Significantly, Corbyn did not call for a second referendum, in keeping with the belief that while such a referendum is officially part of Labour’s policy toolkit, it is one that Corbyn himself vehemently dislikes. But then other senior Labour officials did say a referendum remained an option.

May is stubborn. It is possible that in the next few days a troop of Conservative grandees will call at office-cum-residence at No. 10 Downing Street and tell her that she has go—for the good of her party if not for the good of the country. But a more likely scenario is that she will cling to office, if not to power, and seek to bring her deal to Parliament a third time, perhaps in early May. But she would have to offer something really big in order to convince the seventy-five Conservatives who defied her party whips on March 12 to change their minds. It’s hard to see what that might be, and it’s equally hard to imagine that she would be capable of reaching out to Labour or the nationalist parties of Scotland and Wales to try to secure their support, since that would mean a complete volte face on her previous decision to rule out any form of continued UK participation in the EU’s single market or customs union  (although government policy does not reject participation in a customs union covering specific commodities and services).

The alternative, despite the expected rejection of a “no-deal” Brexit in the March 13 vote is still no deal. This was certainly the view of Austrian Europe Minister Gernot Blümel who delivered this comment after the March 12 vote: “The EU and the Austrian federal government, of course, are also prepared for an approaching no deal. However, we are still convinced that an orderly exit would be the better solution for all sides. It’s up to the UK.”

And while Parliament stumbles and stutters over what to do next, there are still the feelings and emotions of those who feel left out of the debate; voters who three years ago cast their ballots to leave the EU and cannot understand why Parliament has not delivered on their wish, and voters who called on Britain to remain in the EU and are now saying that it is time to revoke Article 50 altogether and abandon the whole Brexit endeavour.

Whatever happens now looks set to deepen these divisions.