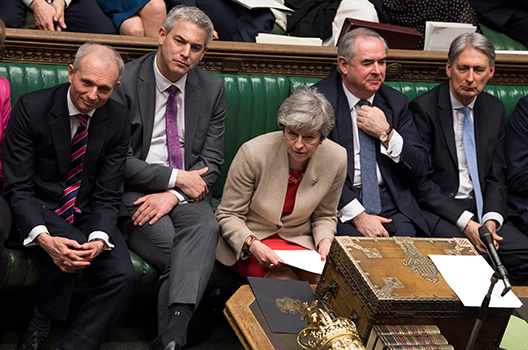 For British Prime Minister Theresa May March 29, 2019, is the date that will live in ignominy. She promised to deliver Britain’s exit from the European Union on this day and, instead, suffered the humiliation of seeing Parliament reject her plans for a third time.

The fifty-eight-vote defeat means that while nothing is clear concerning Britain’s future relations with the EU, May’s own future is settled. She has none. It is as dead as Monty Python’s parrot. It’s kicked the bucket, it’s shuffled off its mortal coil, run down the curtain, and joined the bleedin’ choir invisible. She is an ex-premier.

She remains, however, nailed to her post and there are still some niceties to be seen to. Someone will have to lead a British delegation to ask the European Council to grant the United Kingdom a significant further extension, perhaps as long as two years, to allow for further negotiations. For May, that would be yet another humiliation.

Then there’s the question of a general election, seen as a highly likely consequence of the March 29 vote, in which Parliament rejected, by 344 votes to 286, May’s bid to secure approval for the Withdrawal Agreement concluded with the European Commission last November.

May has already pledged that she will not lead her party into the next election, so that means that if there is to be one — and the clamor in Parliament is pretty loud — then the Conservative Party will have to elect or appoint a new leader. That battle is now fiercely under way, with former Foreign Secretary Boris Johnson and current Environment Secretary Michael Gove considered the front runners.

All this means the UK not only has to consider how to manage future discussions concerning moves to approve — or reject — its departure from the EU, but it also has to work out at least a potential timetable that embraces both ongoing parliamentary debate on Europe and the practicalities of holding a general election.

On Europe, the leaders of the other twenty-seven EU member states ruled earlier in March that Britain would leave the EU on April 12 without a deal if the Withdrawal Agreement was not ratified by close of business of March 29. Immediately after the March 29 vote was announced, the president of the European Council, Donald Tusk, announced he would convene a meeting of EU heads of government on April 10. Unless the British Parliament has by then voted to leave without a deal, a highly unlikely development, the main issue for the Council will be a British request for an extension to the April 12 departure date.

In view of the rejection of the Withdrawal Agreement by the House of Commons, I have decided to call a European Council on 10 April. #Brexit

But before then, on April 1, Britain’s House of Commons will again debate alternative options, and hold a series of indicative votes, regarding both potential outcomes for Brexit and the process required to achieve these outcomes. A proposal for a customs union with the EU lost by only eight votes on March 27 and may well pass this time, perhaps in tandem with a vote that would attach ratification by referendum to such a result, or indeed to any eventual outcome.

The main question now is how long an extension will be requested, or granted, to allow for fresh negotiations. The reason why a long extension of up to two years is anticipated is that any further negotiations may well be conducted by a substantially different British government with substantially different goals that reflect the indicative vote process. In theory, if MPs vote positively for a customs union or some other specific outcome, and if the government then agrees to be bound by this, then it might just be possible for the government to organize Britain’s departure from the EU on May 22. But the timetabling would be difficult, so an extension beyond May 22 currently seems probable.

Any extension beyond May 22 will require the UK to take part in the European elections on May 23. These are likely to prove highly contentious, not just because they should provide an indication as to whether the electorate now embraces more Remainers than Leavers, but because the proportional voting system used will tend to favor extremist on both sides of Britain’s Brexit divide.

Britain could be in for some very rough politicking indeed. The mood of Leavers gathered outside Parliament during the vote looked very grim indeed, with banners describing May as a traitor. It will be interesting to see how the new centrist grouping of eleven former Labour and Conservative MPs, who have re-branded themselves as Change UK – The Independent Group in order to secure recognition as a political party, fares in these polls.

On the domestic front, the mechanics of organizing a general election will need to be put in motion. This means the House of Commons will have to pass, with a two-thirds majority, a motion to dissolve itself. Since the opposition Labour Party also wants an election, this should prove no obstacle, but it might take a few days to arrange.

But it could just mean that May 23 will see both British and European elections. And with both the major parties split, and with significant potential for minor parties to use Brexit-related disputes to take votes from either Leave or Remainer Conservative and Labour candidates, it is extraordinarily hard to assess just what the outcome might be in either poll.