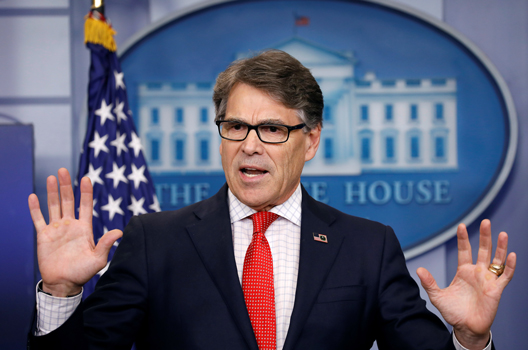 US Energy Secretary Rick Perry speaks to reporters during a briefing at the White House in Washington, DC, June 27, 2017. (REUTERS/Kevin Lamarque)

On July 14, an unofficial draft of the much-anticipated US Department of Energy (DOE) grid study, formally referred to as the Study Examining Electricity Markets and Reliability, was leaked, notably absent any recommendations.

The report was requested in an April 14 memo by US Energy Secretary Rick Perry. A number of senators and representatives, based upon the language of Perry’s memo, publicly denounced Perry’s request for a report, putting him on notice that the final document will be scrutinized carefully. Other groups, mostly renewable energy supports, protested the request for the report as well. However, the leaked DOE staff draft report, sans recommendations, has met with some approval from the same quarters.

In light of the backlash against the original memorandum requesting the grid report, the topics submitted by Perry indeed deserve a close examination, particularly given the absence to date of the release of a final DOE report.

Using Perry’s memo as guidance, the final report should address three issues as outlined below.

(1)     “The evolution of wholesale markets, including the extent to which federal policy interventions and changing nature of the electricity fuel mix are challenging the original policy assumptions that shaped the creation of those markets.”

The problem with any discussion of “original policy assumptions” underlying the evolution of wholesale markets through the US electric industry restructuring is that those “assumptions” were made by individual state legislatures, not by the Federal Energy Regulatory Commission (FERC), the DOE, or any other federal agency. The decision to separate generation from the historic electric utility owners of transmission and distribution systems was also made by individual states. Though occasionally mislabeled as “deregulation,” these state decisions shifted regulation of power plants from state public service commissions’ (PSCs) jurisdiction to that of the FERC. This shift led to the creation of regional wholesale power markets, which were subsequently designed by the FERC (except for power market established by the Electric Reliability Council of Texas [ERCOT]).

Analyzing the effects of “federal policy interventions” will require defining the “interventions” cited and quantifying their impact on specific wholesale markets. For example, the report must define what constitutes an intervention. Whether the definition should include only recent tax policies, favoring renewable energy sources, or also reference older tax policies, for fossil and nuclear fuels, is a source of ongoing debate, as is the cause of “negative prices” in some wholesale power markets.

(2)    “Whether wholesale energy and capacity markets are adequately compensating attributes such as on-site fuel supply and other factors that strengthen grid resilience and, if not, the extent to which this could affect grid reliability and resilience in the future.”

Whether wholesale markets are “adequately compensating attributes” is a valid and interesting question that has been a recurring topic brought before the FERC.

The fundamental question of “attributes” is in the definition of exactly what is, or should be, be traded in an electricity market. It is important to understand the difference between power and energy. Energy is the ability to do work, measured for electric purposes in watt-hours (Wh) or kilowatt-hours (kWh). Power is the rate at which energy is delivered, measured for electricity in terms of watts (W) or kilowatts (kW).

Wholesale markets originally traded only energy (Wh).  The FERC regulated wholesale power markets later realized that capacity, or the ability to deliver adequate power, is also an important attribute. This begs the question of whether electricity generation provides only energy as a tradable commodity (measured in Wh) or “do power plants offer “electric service” with multiple attributes, such as adequate power (W), and electrically important technical support such as balancing, frequency and voltage control. Collectively these necessary attributes are called “ancillary services.” Most FERC wholesale markets today also trade in some auxiliary services.

The DOE’s explanation and analysis should aim to clarify or define this issue, if only to compare with standards set by the North American Electric Reliability Corporation (NERC) and the FERC on related terms such as reliability and resilience of packaged services.

(3)    “The extent to which continued regulatory burdens, as well as mandates and tax and subsidy policies, are responsible for forcing the premature retirement of baseload power plants.”

This issue is twofold, requiring an identification of recently retired baseload power plants, then determining whether the retirement was premature (which is not a regulatory term).

However, the study’s scope of “premature” retirements is limited to merchant power plants selling power in FERC-regulated wholesale power markets. While these power plants are fully under FERC regulatory authority, they are allowed market-based prices rather than the FERC’s old cost of service/rate-of-return methodology.

As a result, these plants are not subject to the FERC’s depreciation authority for setting their economic service lives—rather, power plant management alone determines the retirement date. This date can change due to a variety of non-regulatory factors, including operating, fuel, and maintenance costs, as well as expected prices in the wholesale markets, functional obsolescence, and their competitive position in those markets. Thus, any analysis of the causes of “premature” retirement will need to be specific to both the individual power plant and cause of retirement. This will clearly be the most difficult portion of the report as it requires both careful definitions and significant analysis of the numerous factors contributing to the retirement of any power plant.

With only the memorandum and an unofficial draft as guidance, opposition to or support of the DOE report at present is highly premature. Ultimately, if each of these issues is thoroughly—and apolitically—answered, the resulting report will be useful for future policy discussion at the FERC, the DOE, and in Congress, and should be welcomed.

Branko Terzic formerly served as a commissioner of the Federal Energy Regulatory Commission and Wisconsin Public Service Commission. He is a nonresident senior fellow with Atlantic Council’s Global Energy Center.