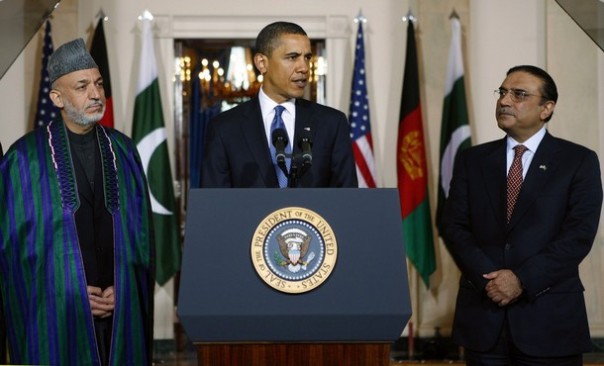 In more ways than one, Osama bin Laden’s death has changed the dynamic in the region and offered a new opportunity to pursue a political settlement to end the almost decade long war in Afghanistan.

Bin Laden’s killing by a covert American mission has injected unprecedented strains in the long troubled Pakistan-US relationship. But in opening up possibilities to accelerate efforts for a diplomatic solution it also provides the two countries a chance to align their objectives in Afghanistan and recalibrate their frayed ties.

Pakistan has long insisted that the Afghan war can only be brought to a close by political not military means. The Obama Administration’s pledge to move towards a ‘diplomatic surge’ and consultations launched in this regard by US special envoy, Marc Grossman, may help narrow the gulf with Pakistan but formidable hurdles will need to be overcome along the way.

In the US, Bin Laden’s elimination has spurred a reassessment of the aims, nature and duration of the American engagement in Afghanistan. Coming ahead of the planned withdrawal in July of the first batch of US troops from Afghanistan, it has intensified debate in Congress and the Administration about the size and speed of this drawdown.

Both Republican and Democratic critics of the US military presence have renewed calls for a more rapid pullout, now that the principal reason for the 2001 American invasion of Afghanistan is gone. Others have cautioned against a premature declaration of victory and hasty rush for the exits. They have also invoked the painful lessons of the abrupt American disengagement from the region in the late 1990s to warn against a precipitous pullout.

As the Administration mulls over the decision about the pace and level of the July withdrawal, Al Qaeda’s decapitation has given President Obama, whose public approval ratings have soared, much greater room to manoeuvre in charting a way forward. He is now positioned to sell the idea of talks with the Taliban without being accused by his opponents of being ‘weak’ on national security. Also helpful is the growing international consensus that an end to an increasingly unpopular war should be hastened by a peaceful political settlement involving negotiations among parties to the conflict. Most Nato countries want to see serious efforts to forge a peace deal.

Even before Bin Laden’s death, President Obama had begun to change track even if civilians in his Administration and the military were not on the same page on talks with senior Taliban leaders. There were three key indications of a transition towards a diplomatic strategy. One, the February 2011 speech by Secretary of State Hillary Clinton, which spelt out three “redlines for reconciliation” with the Taliban – renunciation of violence, abandoning Al Qaeda and accepting the Afghan Constitution – and clarifying, in a significant policy shift, that these were ‘outcomes’ not pre-conditions of any negotiation.

The second indication of a recalibration of Washington’s Afghan strategy was last month’s shake up of President Obama’s national security team and the decision to replace General David Petraeus as commander of coalition forces in Afghanistan. Naming him to head the CIA was a way to get him out of a position to determine Afghan policy, as he, along with others at the Pentagon, remained intent on achieving a military outcome to the war. His successor Lt General John R Allen helped to secure a peace agreement with Sunni insurgents in Iraq.

The third indication of the Administration’s move towards a political strategy is the mandate given to Grossman to explore a ‘reconciliation’ plan and his extensive ‘tripartite’ discussions in Kabul and Islamabad aimed at evolving a framework for peace talks.

In the wake of the Al Qaeda leader’s killing, top American officials have also publicly mused whether this will make it easier for the Taliban to enter negotiations. Clinton, Defence Secretary Robert M Gates and General Petraeus have all said Bin Laden’s demise could weaken Al Qaeda’s influence on the Taliban because the alliance was more personal than organisational. Senator John Kerry went further, describing this as “a potentially game-changing opportunity to build momentum for a political solution” in Afghanistan.

The question this now raises is whether President Obama will use his July speech to go beyond announcing a troop pullout and also publicly commit to an Afghan peace process. In a BBC interview last week he edged towards this by saying that talks will “eventually” have to be held with the Taliban as there was no military solution to the conflict.

Several members of his administration want him to iterate US willingness to enter formal talks with the Taliban to generate the political momentum for a solution, which will need to be in place before 2014, the deadline set by Nato for an end to their combat mission in Afghanistan. They also view the period between July and December, when the next international conference on Afghanistan is to be convened in Bonn, as decisive in which progress in talks must be made so that Taliban representatives can be invited as partners in the peace process.

Pakistan’s role is seen by both the US and Afghanistan as pivotal in helping to attain these objectives. Washington has already conveyed that the ‘core’ group that will be engaged in finding a solution in the ‘reconciliation’ process will consist of four parties: the Afghan government, the Taliban, Washington and Islamabad.

But tough challenges lie ahead in the quest to find a peaceful solution especially as the fighting season approaches in Afghanistan. Among the immediate challenges is how to reconcile the US approach of fight-and-talk with Pakistan’s advocacy of de-escalation in violence involving a stand down or pause in fighting to open diplomatic space for negotiations.

Mounting US pressure on Pakistan to take military action against Afghan Taliban leaders has left Islamabad wondering whether Washington wants to target or talk to Taliban leaders. Army Chief General Ashfaq Parvez Kayani has urged an inclusive Afghan peace process that does not exclude anyone willing to talk. He has also told his US interlocutors that Pakistan should not be pushed in a direction that the Americans will not eventually take themselves. But this circle has yet to be squared.

Another significant impediment to peace talks could be the proposed “Strategic Partnership Agreement” being discussed between the Karzai government and Washington. This would reportedly allow the Americans to retain several bases in Afghanistan – six according to one account – beyond 2014 in order to maintain ‘training’ personnel to assist the Afghan National Army and a ‘scaled down’ counterterrorism force, as an ‘insurance policy’ to make any political deal stick.

Although American officials portray this military presence as a ‘non-threatening’ force structure, if such an agreement is announced this July it could prove to be a deal-breaker even before serious talks have begun with the Taliban, whose main demand – indeed reason for fighting – is to ensure the exit of all foreign forces from their country.

An agreement providing for an indefinite US military presence in Afghanistan will be just as unacceptable to the country’s neighbours. It will be seen in Pakistan as holding out a clear and present danger of unilateral strikes into its territory. Iran will deem it as a threat while Russia and China will view this as a way of maintaining US sway over the region.

The path towards a negotiated peace is strewn with many difficulties that are likely to make the process a complicated and protracted one. But the opportunity to end America’s longest war must be seized sooner rather than later especially as it has so gravely destabilised Pakistan whose ability to find its balance and re-establish domestic peace depends so critically on stability on its western border and an end to the western military presence in the region.

Dr. Maleeha Lodhi is a former Pakistani Ambassador to the United States and special adviser to the Jang Group/GEO. This article originally appeared in The News International.