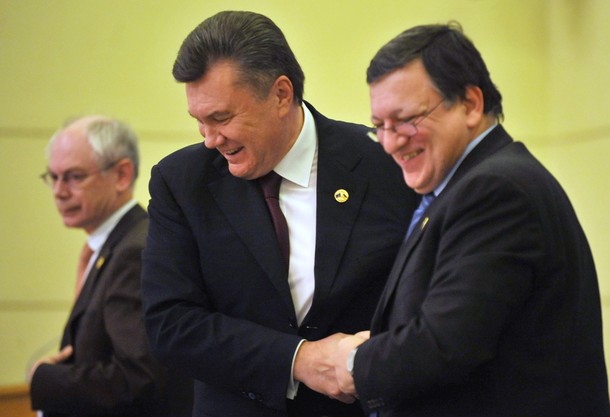 A resolution adopted by the Parliamentary Assembly of the Council of Europe (PACE) on January 26 called for the release of political prisoners in Ukraine, including former prime minister and opposition leader Yulia Tymoshenko with “the possible consideration of sanctions if the Assembly’s demands are not met.”

A report claimed that Ukrainian President Viktor Yanukovych is already blacklisted and that European Union (EU) leaders are increasingly discussing the possibility of sanctions. These threats currently have no teeth.

Serhiy Leshchenko, an investigative journalist with Ukrayinska Pravda, believes Ukrainian oligarchs have learnt their lesson from former Prime Minister Pavlo Lazarenko and no longer seek to travel or live in the USA. Lazarenko was badly advised and sought political asylum in the USA in 1999. A Californian court sentenced him in August 2006 to nine years imprisonment and fined him $10 million for laundering $120 million into the US.

Ukrainian oligarchs Dmitri Firtash, Igor Kolomoyskyy and Rinat Akhmetov have never traveled to the USA, to my knowledge. But, they have no need to when the EU gives them every opportunity to transfer money through Cyprus and the British Virgin Islands offshore tax havens who together account for 40 percent of foreign investment into Ukraine. Ukraine’s oligarchs have business offices, second and third palatial homes and children in private schools in the EU.

Lazarenko was foolish to seek asylum in the USA because he could have traveled to Londongrad, Monaco, Nice, Vienna, Cyprus or elsewhere in the EU, as have hundreds of thousands of oligarchs and businesspersons from the former USSR. In any of these countries he would not have needed to ask for asylum.

In Britain, unlike in USA, Lazarenko would not have gone to prison. He would have been living today in a grand house in one of the Home Counties surrounding London, perhaps an owner of a soccer club (like Russian oligarch Roman Abramovich) and would most certainly have tried to mingle with Britain’s aristocratic and political elites.

Lazarenko’s purchase of film star Eddie Murphy’s Californian mansion for $6 million in cash was a trifle less than the $6.2 million spent by Ukrainian oligarch Victor Pinchuk to entertain 300 guests at his 50th-birthday party in the posh French ski resort of Courchevel at a New Year’s Eve party last year.

Lazarenko’s California home cost even more of a “pittance” when compared with the $150 million (£80 million in 2008) paid by Pinchuk for the world’s most expensive home in London – a five-story Victorian house in Kensington complete with a huge underground swimming pool, gym, sauna, and movie theater. Or when compared to the $220 million paid by Donetsk oligarch Rinat Akhmetov two years later for three penthouse apartments in London that he intends to knock into one.

Leshchenko points out that Lazarenko “looks simply like a child” when compared to Ukraine’s current corrupt government officials and oligarchs. Lazarenko resembles an “unsuccessful pupil. The sums that dripped into his offshore accounts over the course of a year are now stolen in one transaction.”

Four years of negotiations for an Association Agreement with the EU were thrown away after the EU refused to initial, sign, or ratify the agreement in protest of political repression against opposition leaders such as Tymoshenko. Ukraine’s ruling elites have not shown they care about Ukraine’s national interest or any desire to integrate their country into the EU.

The reasoning behind this inaction is two-fold.

First, and most important, it is because they themselves have long lived, worked, shopped, and played in the EU. Second, the EU does not have tough money laundering laws similar to those in place in the US. Corrupt African ex-dictators and deposed President of Haiti Jean-Claude (Baby Doc) Duvalier, for example, have lived in France for decades.

Until the EU begins to threaten the Yanukovych administration with visa denials and sanctions, Brussels will continue to be seen as a paper tiger by Ukrainian officials. Ukraine’s opposition should ask EU leaders how they will ever be treated seriously in Kyiv when they hold double standards on corruption — criticizing when it takes place in Ukraine while at the same time accepting corrupted money from Ukraine and allowing free movement within the EU for those involved in corruption.

In particular, the Ukrainian opposition should direct these questions at the British and Cyprus Ambassadors to Ukraine whose two countries have welcomed billions of dollars of corrupted money from Ukraine.

Until the EU begins to be tough like the US over money laundering, Ukraine’s elites will continue to view EU (and thereby Western) criticism of their undemocratic practices as irrelevant because it is devoid of bite.