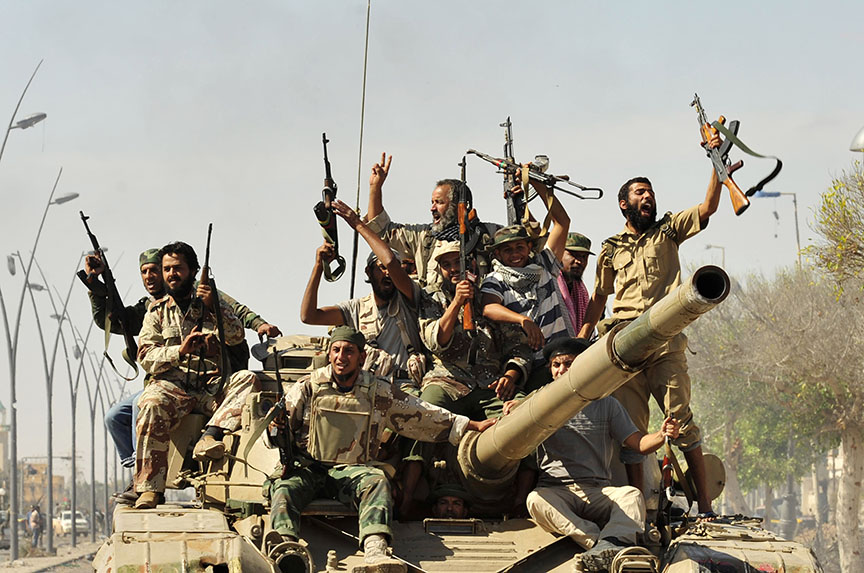 An unusual protest erupted in Libya’s eastern city of Benghazi on February 15, 2011. Enraged by the arrest of a human rights activist, protestors clashed with police and supporters of Libya’s longtime ruler, Moammar Gadhafi, who responded with brute force. Two days later, activists called for a “day of rage.”

The protests spread like wildfire across Libya, whose neighborhood was already being buffeted by the so-called Arab Spring pro-democracy uprisings. Longtime leaders, including Gadhafi, were ousted in the Arab Spring revolutions. Hundreds of thousands of lives were lost and millions were displaced from their homes.

Seven years later, Libya is mired in chaos. The country has two power centers—an internationally recognized government based in Tripoli and an internationally recognized parliament based in eastern city of Tobruk. The latter has appointed a government in the city of Beyda that does not have international recognition. The Islamic State of Iraq and al-Sham (ISIS) has put down roots in the country and human traffickers exploit the chaos to funnel migrants north towards Europe.

On this seventh anniversary of the Libyan revolution, we take a look at the events that led this North African nation from a protest to a revolution, and ultimately to chaos with no end in sight.

February 15: Hundreds of people clash with police and supporters of longtime ruler Moammar Gadhafi over the arrest of a human rights activist in the eastern city of Benghazi.

February 17: A “day of rage” is observed. Widespread protests mark the official start of the Libyan revolution.

February 26: The United Nations (UN) Security Council imposes sanctions on Gadhafi, his family, and his associates and refers Gadhafi and his son, Saif al Islam, to The Hague-based International Criminal Court (ICC) for the regime’s crackdown on the protesters.

February 27: Rebels from multiple municipalities form the National Transitional Council (NTC) to officially represent Libya. The NTC will rule Libya until elections for the General National Congress (GNC) in 2012.

March 5: The NTC declares itself the sole representative of Libya at a meeting in Benghazi.

March 10: France recognizes the NTC as the legitimate representative of the Libyan people.

March 15: After spending twenty years in the United States, Khalifa Haftar returned to Libya to lead a rebel army in the east against Gadhafi. Haftar was a commander in Gadhafi’s army. He moved to the United States after he was captured by Chadian forces during the Libya-Chad war in 1987. The NTC preferred Gadhafi’s Defense Minister Abdel Fattah al Younis, who defected early on in the revolution, to lead the rebels under the NTC.

March 16: Gadhafi’s forces close in on Benghazi. Gadhafi’s son Saif al Islam declares: “Everything will be over in forty-eight hours.”

March 30: Libyan Foreign Minister Moussa Koussa defects and flees to the United Kingdom. He says that he is no longer willing to represent the Gadhafi regime.

April 10: Gadhafi accepts a roadmap to end the conflict, but rebels reject the plan.

Libyan leader Moammar Gadhafi waved to supporters in his compound of Bab Al Azizia in Tripoli after a meeting with a delegation of five African leaders seeking to mediate in Libya’s conflict on April 10, 2011. (Reuters/Louafi Larbi)

April 15: The rebels declare victory in Misrata, an important city in the north west of Libya with significant political power.

July 15: The United States recognizes the NTC as the legitimate government of Libya.

August 21: The rebels enter Tripoli where they meet little resistance. They reach Green Square and rename it Martyrs’ Square. Gadhafi calls on Libyans to fight off the rebel “rats.” The rebels begin attacking Gadhafi’s compound in the following days.

October 20: Gadhafi is capture by rebels and killed in his hometown of Sirte.

October 23: The NTC declares victory and Libya is officially liberated. The NTC announces it plans to hold elections within eight months.

November 19: Saif al Islam is arrested in southern Libya. He is moved to Zintan, near Tripoli. A Libyan court later tries him on multiple charges, including war crimes.

January: Clashes among rebels reveal a rift has emerged within the NTC.

March 6: Local leaders in Benghazi proclaim the east to be the semi-autonomous “State of Cyrenaica.” NTC officials from the east want to establish autonomy for the region, highlighting the growing rift within the NTC and revolutionaries in general.

July 7: Two-and-a-half million Libyans take part in an election to pick two hundred representatives for the General National Congress (GNC). The GNC will replace the NTC.

August 8: The NTC officially transfers power to the GNC. Mohammed Yousef al Magariaf is elected chairman of the GNC and becomes interim head of state.

September 11: Militants belonging to the terrorist group Ansar al Sharia attack a US consulate building in Benghazi. US Ambassador Chris Stevens and three other Americans are killed.

October 7: The GNC dismisses Mustafa Abushagur because his two rounds of cabinet picks are seen as unrepresentative of all of Libya.

A protestor celebrated as a US consulate building burned behind him in Benghazi, Libya, on September 11, 2012. The US ambassador to Libya, Chris Stevens, along with three other Americans, was killed in the attack. (Reuters/Esam Al-Fetori)

April 11: The United States and the United Kingdom withdraw some diplomatic staff from Tripoli due to increasing security concerns.

May 5: The GNC passes a Political Isolation Law (PIL), which bans all officials from the former Qaddafi regime from politics. This law contributes to the political polarization in the GNC.

August 17: Ibrahim Jadhran, the leader of the Petroleum Facilities Guard (PFG), defects from the GNC. He halts operations at Marsa al-Hariga and Zueitina oil fields in eastern Libya and demands greater revenue sharing with the eastern region, government transparency, and federalism. Then-Prime Minister Zidan’s inability to make a deal with Jadhran and reopen the oil facilities will lead to his eventual dismissal.

February 20: Libyans elect a committee to draft a new constitution.

February 7: The GNC’s mandate officially expires but it refuses to disband. Protests follow.

February 14: A Constitutional Assembly is elected with the goal of writing a new constitution.

April 8: After a letter from interim Prime Minister al Thinni requesting to extend the mandate, the GNC officially appoints al Thinni as prime minister and gives him one week to submit names for a cabinet.

April 13: After an attempted attack on him and his family, al Thinni submits a letter of resignation but remains a “caretaker” of the government until the parliament can replace him and his ministers.

May 23: Misratan militias, aligned with the rump GNC, move into Tripoli to face pro-Haftar forces.

July 26: Clashes in Libya escalate. Foreign embassies shut down, UN staff and foreigners evacuate, and 100,000 Libyans are displaced. Fighting renders the Tripoli International Airport unusable; it remains so to this day.

July 30: The armed Islamist group Ansar al Sharia seizes control of much of the eastern city of Benghazi.

August 4: The HoR meets for its first inaugural meeting and members are sworn.

August 14: Spanish diplomat and politician Bernardino León is appointed as the first Special Representative of the [UN] Secretary General (SRSG) for Libya.

August 23: Libya Dawn takes over Tripoli, forcing the HoR to relocate to Tobruk in eastern Libya, where it remains today.

February 15: ISIS seizes control of the city of Nawfaliyah and key buildings in Sirte along the coast of the Gulf of Sidre. ISIS goes on to establish a stronghold in the district of Sirte, spanning 200 miles between Tripoli and Benghazi in the center of the country.

November 4: The United Nations appoints a German diplomat, Martin Kobler, to take over as the second SRSG for Libya.

December 17: The GNC and members of the HoR sign the Libyan Political Agreement (LPA) in Skhirat, Morocco. The agreement established a nine-member Presidency Council (PC) to be the cabinet of a new “unity” government. The seventeen-member Government of National Accord (GNA) would act as the executive branch of government and hold elections within two years. The High State Council (HSC) would be an advisory body to the GNA. The HoR would remain as a legislative branch.

May: Forces from Misrata, with the support of US air power, attack ISIS militants in Sirte.

December 17: The western-based GNA officially declares Sirte liberated from ISIS. Militias aligned with the GNA and supported by US airstrikes finish a nine-month campaign to rid Sirte district of ISIS.

June 10: Saif al Islam is presumably freed from prison in Zintan although there is no official statement and his current whereabouts are unknown.

June 22: Lebanese academic Ghassan Salamé is appointed as the third SRSG for Libya.

September 20: At the UN meeting in New York, Ghassam Salamé proposes an Action Plan for Libya comprising of amending the LPA, holding a national reconciliation conference, and holding presidential and legislative elections. The three events will be completed within one year.

September 25-October 16: A Joint Drafting Committee to amend the LPA comprising of representatives from the HSC and the HoR meet in the Tunisian capital, Tunis.

October 16: The HoR withdraws from UN-led negotiations thus stalling the UN Action Plan. The dialogue committees disagree on a representative and fair selection process of top military and political leaders, and blame each other for the gridlock.

October 24: The negotiations officially end without a consensus between the HSC and HoR on power sharing and a new LPA.

December 17: Second anniversary of the LPA. Leading up to the December 17 date, international actors and the UN-backed government in Tripoli encourage all to see the date as an anniversary rather than an expiration. Haftar announces the LPA is invalid, but takes no military action.

Erin Neale is an intern in the Atlantic Council’s Rafik Hariri Center for the Middle East. Follow her on Twitter @erinaneale.

Image: Rebels opposed to Libyan leader Moammar Gadhafi celebrated a military victory in Gadhafi's hometown of Sirte on October 20, 2011. Gadhafi was captured and killed by rebels in Sirte on the same day. (Reuters/Esam Al-Fetori)