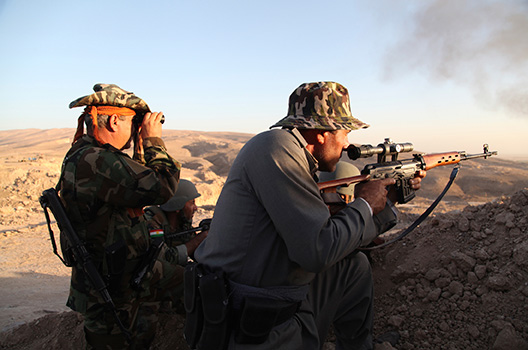 US Has Declined to Arm Kurdish Forces, But That Now Must Change

Iraq’s national army effectively has collapsed before the advance of the brutal guerrillas of the Islamic State, leaving only one effective fighting force – the Kurdish peshmerga – to confront them. As the Islamic State in Iraq and al-Sham (ISIS) has seized much of northwestern Iraq, and as it threatens genocidal violence against minorities, including an estimated 40,000 people from the Yazidi sect now trapped on barren mountains, the peshmerga are doing the bulk of the fighting against this threat. Since early June, 150 peshmerga reportedly have been killed in the conflict.

The peshmerga are the military force, authorized under Iraq’s constitution, for the Kurdistan Regional Government. Despite being outgunned and thinly stretched along a front line of more than 1,050 kilometers (650 miles), the peshmerga have held together under ISIS’ advance toward Erbil, the Kurdish region’s capital. They have fought ISIS for days for days for control of the Mosul Dam on the Tigris River – a facility that the guerrillas could sabotage, threatening millions of Iraqis with flooding downstream.

US airstrikes against the Islamic State guerrillas near Erbil last weekend allowed the peshmerga, to recapture towns they had lost to the religious militants. As President Obama said in his weekend address, fighting ISIS will require a longer-term engagement. In recent years, the Obama administration has limited its support — and avoided providing weapons — to the Kurdish regional government, because it opposes the Kurds’ efforts to break away from Iraq as an independent state. But the menace of ISIS now requires a change. (Read the Atlantic Council’s Faysal Itani on the underwhelming US response so far to the ISIS emergency.)

The Kurds Are Outgunned

The Islamic State has reinforced itself with state-of-the-art US weapons, including armored Humvees and artillery that it seized from Iraqi army units it defeated. The peshmerga have mostly older, Soviet and Russian arms. US officials were quoted Monday saying that the Obama administration has begun sending weapons to the Kurdish force, reversing its long-standing policy of supplying only Iraq’s national army. The Iraqi central government appears to have made arms deliveries from its own stock as well. The US and its Western allies should extend this initial help by providing heavy weaponry, ammunition, and intelligence data. Air support by the US and Iraqi army for Kurdish maneuvers must be ramped up.

The Kurdistan Regional Government also is struggling to meet the urgent needs of an estimated 1.2 million refugees, from both Syria and Iraq, who have swept into the relatively safe haven of Iraqi Kurdistan. Even before the Islamic State’s June offensive, the Kurdish regional authorities had responsibility for more than 250,000 people uprooted by earlier fighting. When Iraq’s northern metropolis, Mosul, fell to the guerrillas on June 9, 650,000 people fled the city. The guerrillas’ brutality toward non-Sunni Muslim minorities has forced Iraqi Christians and Yazidis to flee into Kurdistan, a “humanitarian tragedy” according to the United Nations. The humanitarian situation is dire. People are starving and dehydrated, have no or limited access to shelter and medication.

As it fights a war and a humanitarian disaster, the Kurdish government is struggling financially. It has not received its allocations under the Iraqi national budget since January.

The US airdrops of humanitarian aid to the Yazidis atop the Sinjar Mountains is only a start. A broader, longer international effort is required, beginning immediately with supplies of water, food, sanitation help, tents, and medicines. Aid deliveries coordinated by the United Nations and distributed through Baghdad must reach those in need in the Kurdish Regional Government as well.

Non-government institutions must help. Aid such as that from the United Arab Emirates Red Crescent could be channeled in part through churches and mosques providing shelter. Universities in the Kurdish region have partnerships with others around the world that can help raise funds. Public-private partnerships are also critical. The Kurdish government announced in April that it had received $15 million dollars in donations for humanitarian aid for Syrian refugees from energy companies investing in the region. Companies in other sectors invested in Iraqi Kurdistan should consider chipping in.

The Kurds are at the vanguard of a fight against a terrorist threat that may quickly become global in nature. The barbaric Islamic State must be halted with urgency, and eventually defeated. The peshmerga are risking their lives as the boots on the ground – but they need help, and quickly.