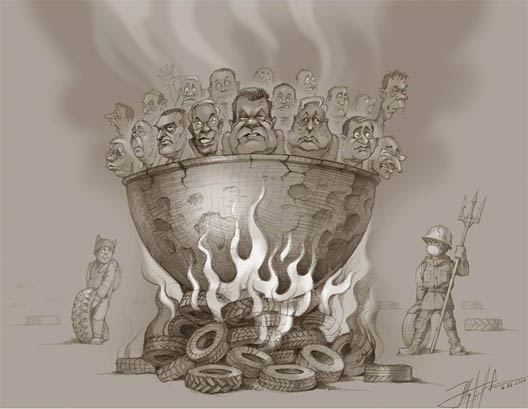 Eleven weeks after President Viktor Yanukovych sparked peaceful street protests by halting Ukraine’s effort to build closer ties to Europe, his standoff with the opposition has slid into ugly violence that has polarized politics and pushed the country to the brink of a civil conflagration.

Ten of Ukraine’s twenty-five regions are beyond the control of the central authorities and the center of the capital is under opposition occupation. State power is disintegrating, the economy is just one slip from collapse, and little time remains to prevent a catastrophe. While international media buzzed late this week about the tapped phone call that captured profane talk about Ukraine by US Assistant Secretary of State Victoria Nuland, the US and European governments must stay focused on Ukraine’s best hope: its oligarchs.

A cohort of perhaps 20 billionaires who control about a fifth of Ukraine’s gross domestic product, the oligarchs bristle at Yanukovych’s corrupt accumulation of power and his diversion of national wealth to cronies favored by him and his elder son. (At the same time, many oligarchs have been willing partners in Yanukovych’s raiding of the national economy.) The oligarchs have kept mostly to the sidelines of this crisis so far, yet they wield the political influence, including in parliament, to force Yanukovych into making concessions that could turn Ukraine back from the brink.

The Obama Administration and EU governments should ratchet up their existing dialogue with the oligarchs into pressure. They should make clear that the West will hold those who have supported Yanukovych responsible for any crackdown against the opposition and will sanction them and their ability to invest abroad.

Police violence, overt and secret, has been the biggest polarizer in this crisis. It has included the abduction and severe beating of opposition activists, attacks on protesters that have injured more than 1,700 citizens, including some 200 journalists and medical personnel, and the deaths of five people. Police and security services support vigilante squads of pro-Russia hardliners from Ukraine’s east that have joined in the abduction and killing of opposition activists.

At the main site of demonstrations, Kyiv’s Maidan Nyezalezhnosti (Independence Square), the state’s violence prompted protesters to organize their own forces. On February 6, 2,000 volunteers of the Maidan’s self-defense force marched on parliament in a show of strength. Many were equipped with helmets, body armor, shields, and bats. They are augmented by some 500 fighters from the Right Sector, an amalgam of hard-right groupings that have been in the forefront of pitched battles with the anti-riot police, or Berkut, and other Interior Ministry forces.

In east Ukraine, radicals from Yanukovych’s Party of Regions have formed a National Front and speak openly about the need for assistance from Russia to beat back the opposition “nationalist plague.”

The turn to violence is pushing a weak economy close to panic. As a fearful population hoards hard currency, the Ukrainian hryvna has lost 10 percent of its value since the start of the crisis. The country’s hard currency reserves fell 13 percent, to just $17.8 billion, in January alone. Ukraine owes Russia’s state-controlled Gazprom nearly $3.5 billion for gas already consumed, and is due to make close to $4 billion in loan repayments this year to the International Monetary Fund. Any serious run on Ukraine’s banks could quickly evaporate Ukraine’s remaining reserves.

Foreign investment, which slowed after Yanukovych pulled back from a free trade agreement with the European Union, remains on hold. And Ukraine’s uncertainty has led Russia to halt the bailout of Ukraine’s economy that it announced last month.

The prospect of economic collapse cannot be welcome to the oligarchs, many of whom have monopolies or near-monopolies in key sectors of the economy. Rinat Akhmetov, Ukraine’s wealthiest man, whose holdings are believed to represent as much as 7 percent of the country’s GDP, controls nearly all of Ukraine’s steel production, nearly half of its power utilities, the lion’s share of its iron ore holdings and a plurality of its coal mining. He has expanded into banking, telecoms, wind power, television and print media, rail transportation, and even the retail trade.  Others among the super-rich dominate agriculture, chemical production, media, banking, private sector gas trading, machine-building, and the non-ferrous metals trade.

Most of these oligarchs have also been politically active, either as deputies themselves, or as financiers of legislative blocs, in the Rada, Ukraine’s parliament. A 2010 ruling by Ukraine’s Constitutional Court transferred major powers from the parliament to the presidency (reversing democratic reforms made under Ukraine’s 2004 Orange Revolution). That shift diminished the oligarchs’ power and enabled Yanukovych and his family to shake them down for billions of dollars in the years since.

While some oligarchs lean to closer relations with Russia, others share business interests with the Yanukovych clan, and others support a pro-European course, nearly all are unhappy with the vast centralization of presidential power. These oligarchs have a chance to use the current crisis to install a magna carta to limit presidential authority and protect their own long-term interests.

Some are beginning to make themselves heard. More than 70 deputies among the roughly 240 who form Yanukoych’s governing majority in the 447-seat Rada have declared that a violent crackdown is unacceptable and that they will not support any declaration of a state of emergency. They and Yanukovych have signaled, perhaps for differing reasons, that they are ready for a serious discussion of constitutional reform. While the opposition is suspicious of such declarations and sees them as a possible delaying tactic, there are strong reasons why the ruling elite might support fundamental change.

The business elite would benefit from a parliament elected 50 percent via a proportional party list and 50 percent in single-member districts where oligarchic money can be decisive. For President Yanukovych, such a system could offer a way out. His Party of Regions could retain a significant base in the next parliament.  And if a revised constitution had parliament elect a president with limited powers, Yanukovych could see a pathway to long-term political survival at a time when he is opposed by a clear majority of the country.

Despite its mistrust of Yanukovych, the opposition might agree to this type of solution, especially if it included an interim government of experts to address the economic crisis and ensure internationally supervised elections.

Above all, the main danger to be avoided is that Russia or Yanukovych’s inner-circle hardliners might persuade him to seize control in a crackdown. That would trigger a long chapter of violence and seal Yanukovych’s legacy as a murderous tyrant who destroyed Ukraine’s relatively pluralistic society.

Western governments have been pursuing quiet dialogue with Ukraine’s oligarchs for years, and hearing them profess their preference for domestic reforms and Ukrainian integration with the European Union. Saving Ukraine means it’s now time to include pressure in that dialogue, and to shift the oligarchs from words to deeds.

Image: Ukrainian President Viktor Yanukovych (center) and his top officials and political allies are shown feeling the political heat of Ukraine's street protests in this February 2 cartoon by Yuriy Zhuravel, a caricaturist who has been following the three-month-old crisis. (Illustration: Yuriy Zhuravel, used by permission)