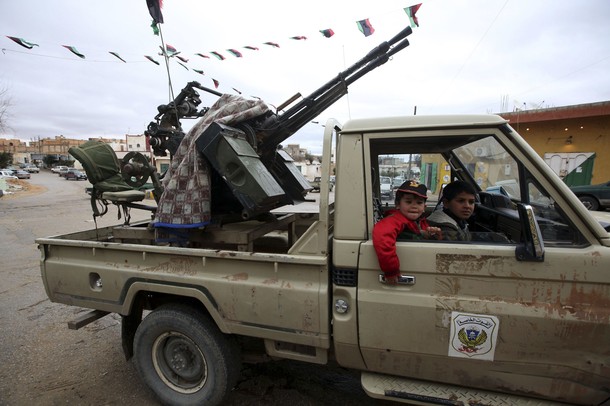 The setbacks to Libya’s internal security and stability are worsening in the run up to scheduled June elections.

This past weekend, the Zintan militia clashed with alleged pro-Qaddafi residents of a Tripoli neighborhood and a massive pro-federalist rally in Benghazi was attacked by a group of unknown armed assailants. The latest violence comes after last week’s declaration of autonomy by a select conference of eastern Libyans in the region of Cyrenaica. National Transitional Council (NTC) head Mustafa Abdul Jalil has demanded that the militias disarm themselves and hand over control of government.   The larger, more powerful western militias, like that of Zintan and Misrata, have steadfastly refused to hand over their weapons.

Neither the US nor Europe has shown much interest in Libya’s internal stabilization. The current US focus has been tracking down errant weapons caches from Qaddafi’s former military to prevent them from ending up in the hands of militants and terrorist groups that operate in the Maghreb and the African Sahel. The EU is worried about the influx of migrants washing ashore on its southern coastline. While these are legitimate concerns, it is ultimately Libya’s internal stability that will determine the flow of migrants and weapons. By focusing only on the side-effects of the intervention, the US and Europe risk allowing post-Qaddafi Libya to splinter, creating a security vacuum. The result would be a failed state in North Africa, on the southern edge of Europe and NATO. This would exacerbate the impact of weapons smuggling and mass migration, precisely the issues that worry the United States and Europe most.

In order for Libya to avoid collapse, it is vital that the militias be disarmed and reintegrated into the country’s new national forces. Such an effort requires a comprehensive Disarmament, Demobilization, and Reintegration (DDR) program that the current transitional government is incapable of undertaking on its own. Much blame lies with the NTC itself. Missteps and delays over the promulgation of the new electoral law have only widened the trust gap between the NTC and its critics. Local councils, particularly in Cyrenaica, and militias regularly complain of the NTC’s lack of transparency over its membership roster and the decision-making process that guides the creation of new laws. Militias are unlikely to hand over their weapons to a transitional government they do not trust.

The NTC also refused early on any UN peacekeeping mission or any other foreign assistance that would require boots on the ground. As a result, the US, Europe, and NATO backed off on the possibility of post-war stabilization assistance, leaving the NTC to deal with the proliferation of militias on its own. Instead of waiting on the sidelines, the US and Europe should be engaging vigorously with the NTC to move the process forward.

A DDR process is also an inherently political one and with the NTC and various militia commanders and local leaders at loggerheads, there needs to be an active interlocutor that can shepherd the process. In this instance, it is unlikely to be the US. The EU, which has offices in Benghazi and Tripoli, remains the third party that could best act as a mediator. The US could, and should, act in a supporting role.

The US should advance the idea of an internationally-sponsored political negotiation somewhat akin to the Bonn Agreement for Afghanistan, where the various parties could openly discuss their issues and concerns in a neutral third country setting. The Libyans should be allowed to set the tone, with both the NTC and militia-council representatives choosing other third countries (perhaps Turkey and some Arab League representation) to help facilitate the negotiations.

Without a political solution to Libya’s post-conflict instability, the country will continue to fracture. The absence of a political process that will satisfy local and regional concerns means that scheduled constituent assembly elections for June will either not happen at all, or if they do, could end disastrously. Pro-federal easterners and powerful independent militias could reject the results of the June election if they conclude that the NTC is politically illegitimate. If such a scenario comes to pass, a return to widespread violence is likely. A failure to secure the transition in Libya would be damaging to the ultimate legacy of the intervention and erode American or European credibility as supporters of democratic development in the Arab world.

In order to ensure the success of the transition, the US and EU must politically engage and maintain sustained focus on Libya by bringing the NTC and the militias to the table to resolve their outstanding issues. Only then would it be possible for a legitimately-elected government to emerge that could effectively manage its own security affairs and guarantee the long term stability and territorial integrity of the Libyan nation.

Alec Simantov is an intern with the Rafik Hariri Center for the Middle East.