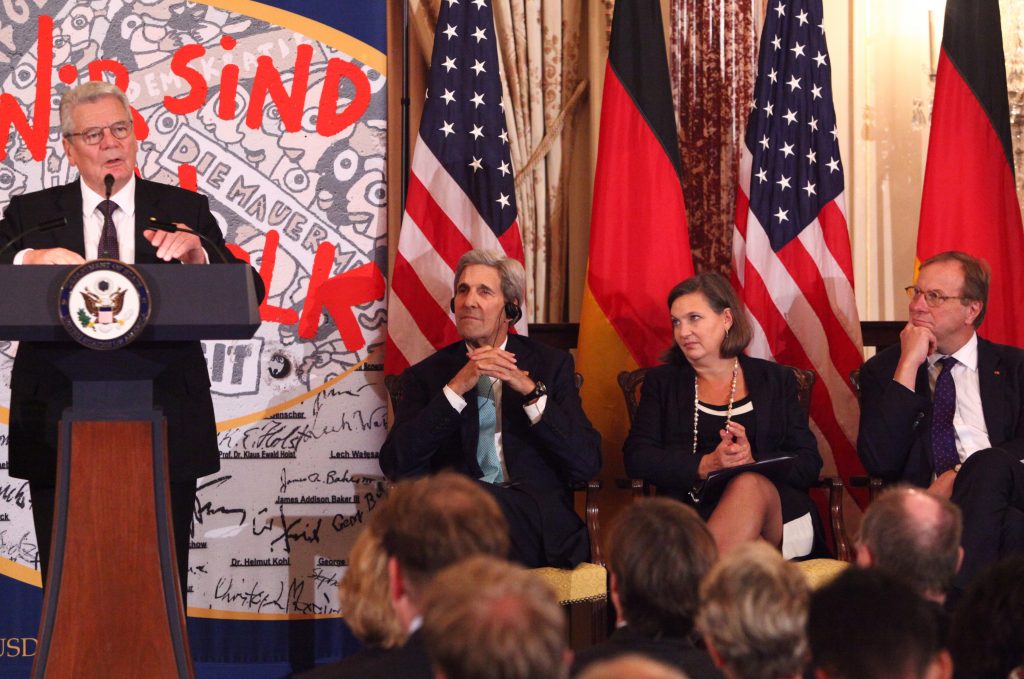 German President Joachim Gauck (left) speaks at the commemoration of a section of the Berlin Wall at the State Department on Oct. 7. He was joined at the ceremony by US Secretary of State John Kerry (center); Victoria Nuland, US Assistant Secretary of State for European and Eurasian Affairs; and Atlantic Council President and CEO Frederick Kempe. The Atlantic Council gifted the panel through an agreement with the German company Verbundnetz Gas. It will be displayed in the US Diplomacy Center. (Atlantic Council/Victoria Langton) 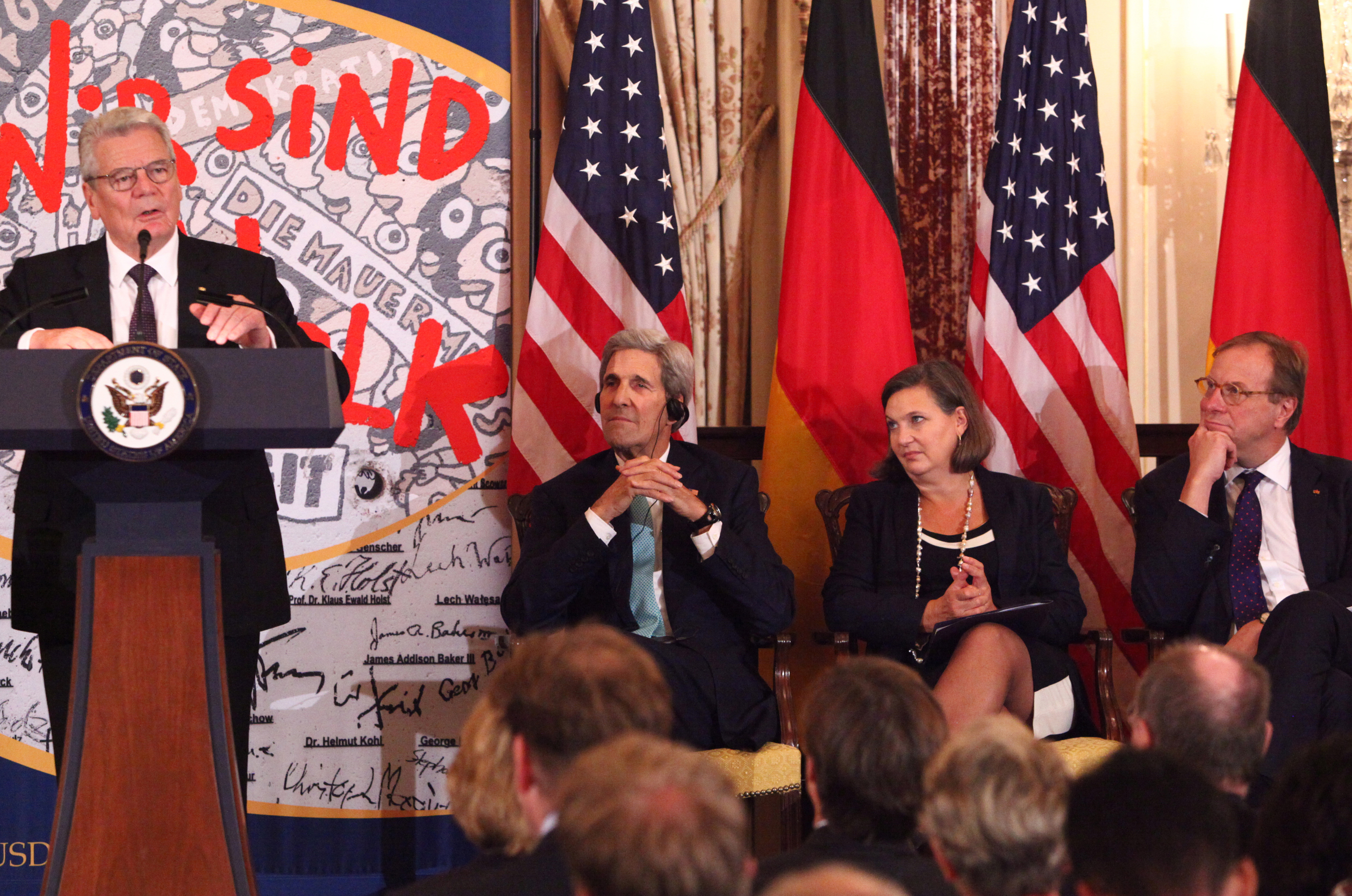 Joachim Gauck calls for greater US engagement with Europe

On a recent visit to the United States, German President Joachim Gauck delivered an impassioned plea for the revitalization of the transatlantic relationship, describing it as “not an optional alliance,” but rather an “essential strategic alliance.” He also called for far greater US engagement with Europe at a time when the continent is “surrounded by crises.”

“In a world where terrorists are on the rampage, where autocrats and dictators ride roughshod over others, where states are failing and entire regions descending into chaos, where the central legal principles for our co‑existence are no longer respected in some places – in this world of old and new dangers, the established alliance of free and democratic nations will be the most important pillar of stability,” Gauck said in an Oct. 6 speech at the University of Pennsylvania in Philadelphia.

Europe is seeing multiple threats emerging to its east and south. Russia’s annexation of Crimea and support for separatists in eastern Ukraine, coupled with a surge of refugees unleashed by the war in Syria, have sparked calls for closer transatlantic unity.

“In light of the conflicts of the past and out of concern for the West’s ability to shape tomorrow’s world, the United States should take the following to heart: engagement in and with Europe on an enduring basis remains the best conceivable investment in stability – especially when new threats are emerging,” Gauck said.

Gauck’s visit to the United States included a stop in Washington, where he participated in a ceremony at which the Atlantic Council presented a section of the Berlin Wall to the State Department for display at its US Diplomacy Center, set to open in 2017.

While noting that some Americans believe a long-term engagement with Europe is no longer necessary, Gauck said: “There is one thing which we in Europe need above all else: on-going American engagement,” Gauck said.

Revitalizing the transatlantic relationship was the underlying theme of the German President’s US visit. In a Washington Post op-ed, Gauck wrote: “A Europe without the United States would represent a historic setback.”

Germany today is shouldering more responsibility than ever before in Europe. It has, especially, taken the lead on security and humanitarian issues.

“Greater German responsibility while American engagement simultaneously diminishes would not do Germany — or Europe — any good in the long term,” said Gauck. “Nor would it benefit the United States or the rest of the free world.”

On the humanitarian front, Germany has taken in hundreds of thousands of migrants who are fleeing wars and instability—particularly in Syria. German officials expect a record 800,000 asylum seekers and refugees to have arrived in Germany by the end of 2015. Despite an initial warm welcome, Germany is now struggling to cope with the influx and public opinion has slowly turned against Chancellor Angela Merkel.

But, Gauck said, Germany cannot afford to turn its back on this crisis.

“Closing ourselves off is not an option, it is no longer a solution: not for Germany, not for Europe and not for America,” said Gauck.

The US-German relationship was badly strained in 2013 when Edward Snowden, a former government contractor, revealed surveillance of foreign leaders by the National Security Agency. This past summer it was reported that not only had the NSA eavesdropped on Merkel, it had also listened in on other top German officials’ conversations.

The President said he understood the argument why Germans, instead of first relying on US security services and then criticizing the United States when its activities are revealed, don’t do more to tackle terrorism themselves.

“But,” he said, “allow me to turn the question round. Why do phone numbers of German cabinet secretaries — apparently including agriculture secretaries — appear in the American services’ lists? What does that have to do with countering terrorism? And why do German citizens get the impression that incursions into their private sphere are a democratically uncontrollable result of fending off a terrorist threat?”

“It seems to me that we have not yet arrived at a viable balance of interests here. This would be a good opportunity for the United States to win back lost trust,” he added.