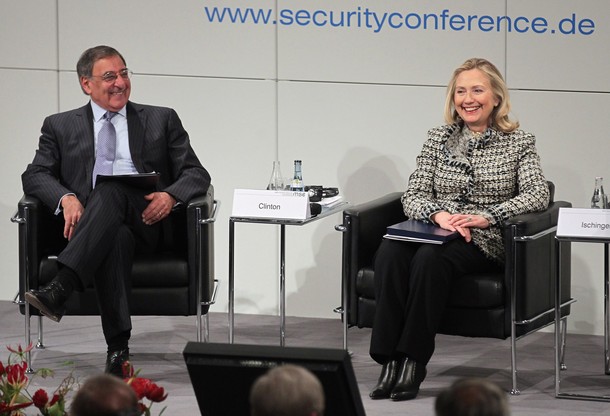 Secretary of State Hillary Clinton and Secretary of Defense Leon Panetta said all the right things about the transatlantic relationship at the Munich Security Conference. Alas, Panetta made a mockery of them on his way there.

Panetta declared that “peace and prosperity of Europe is critically important to the United States, but because Europe remains our security partner, our security partner of choice for military operations and diplomacy around the world.” Clinton joined in, saying, “Europe is and remains America’s partner of first resort.” She added, “Today’s transatlantic community is not just a defining achievement of the century behind us. It is indispensable to the world we hope to build together in the century ahead. Here in Munich, it is not enough to reaffirm old commitments. The world around us is fast transforming, and America and Europe need a forward-leaning agenda to deal with the challenges we face.” She noted that she’d traveled to Europe 27 times in her present office and President Obama himself had made ten trips.

Yet, all the talk about the importance of the Obama administration’s profound respect for our transatlantic allies was belied by the fact that, on his way to the conference, Panetta casually undercut the words by summarily announcing a major change in American strategy in the Afghanistan fight without so much as a warning–much less consultation–with said allies.

Panetta claimed in his Munich remarks that “Our bottom line [in Afghanistan] is ‘in together, out together.’ As an alliance, we are fully committed to the Lisbon framework and transitioning to Afghan control by 2014.” But that’s just talk. The bottom line is that a commitment to transition responsibility for the fight to Afghan forces a year early is a complete departure from the outcomes-based approach agreed to at Lisbon.

Now, as I’ve argued before, the revised policy is the right one. But our NATO allies, most if not all of whom are still in Afghanistan against a tide of popular opinion at home solely because America has asked them to be there, deserved to be consulted and given time to plan their own roll-out of the announcement to their publics.

As Foreign Policy‘s Josh Rogin reports, “several NATO and European officials were shocked and some were even a little miffed that Panetta had made a major change in the messaging over the Afghanistan war without giving them a heads up.”

Rogin quotes a “high ranking European official” saying that his government was expecting a new timeline to come at the NATO Summit. on the notion that “we can’t say the same thing in Chicago as we said in Lisbon.” But Panetta jumped the gun.  “It was all carefully planned and now that plan is completely ruined.”

The same official explains, “We said, ‘Okay, if Obama needs this politically, that’s fine. But please consider the bad side effects for us. This is hard to explain to our constituencies.  Before today we could still say the drawdown was conditions based. Now we can’t make the argument that it’s anything but politically motivated.”

Given that the Afghanistan mission has long since become Americanized, with European militaries providing a very small part of the fighting forces on the ground, the United States reasonably expects to have the dominant voice in major decisions governing the fight. But if we expect our allies to believe that we value their contributions and take them seriously as partners, we can’t treat them as afterthoughts.