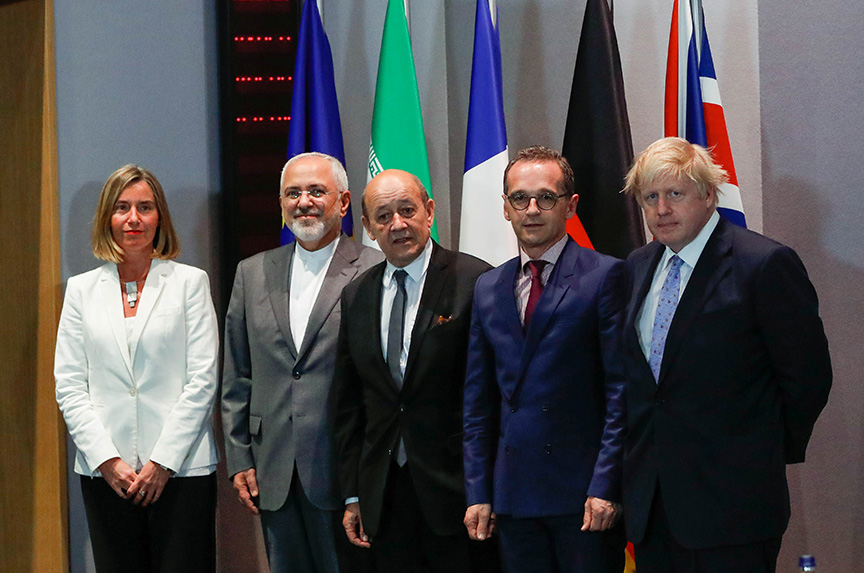 European efforts to preserve the Iran nuclear agreement, coupled with US plans to impose sanctions on Iran and secondary sanctions on companies that fail to comply with those sanctions, have contributed to a dangerous divide in the Atlantic community—one that threatens an economic relationship that remains the linchpin of the world’s economy.

This is hardly the first time that the allies have tangled over issues that simultaneously impact each other’s economic and strategic interests.

Each time there is a significant crisis in the transatlantic relationship, observers look to the past to gauge the severity of the current one.  Until recently, strained ties between US President Donald J. Trump’s administration and Europe over trade, Iran, climate change, and other issues amounted to the worst divergence since the Iraq war of 2003.

In the run-up to that conflict, France and Germany opposed the US-led multinational effort and lobbied other countries to oppose the invasion of Iraq.  Other European nations, including especially the United Kingdom, participated in the war.

In the aftermath of Trump’s May 8 decision to withdraw from the 2015 Iran nuclear deal (known formally as the Joint Comprehensive Plan of Action) that froze Iran’s nuclear weapons program in exchange for lifting economic sanctions, a potentially worse crisis is emerging that may test the resiliency of the seventy-year old alliance more than any previous split since the Suez crisis of 1956.

In 1956, Israel, France, and the United Kingdom invaded Egypt to regain control of the Suez Canal, which Egyptian President Nasser had nationalized. Then US President Dwight D. Eisenhower used economic and political pressure, even threatening economic sanctions against the three countries, which led them to withdraw from Egypt. Eisenhower was concerned that intervention in canal would destabilize the region and draw the Soviet Union, a nuclear power, to side with Egypt against the United States’ NATO allies. All three intervening countries, especially the United Kingdom, saw their international roles diminished by the affair.

Tomas Valasek, a former Slovak ambassador to NATO, expects things to deteriorate further before improving, adding: “For the first time arguably since the Suez crisis, the United States and key European powers will be actively seeking to undermine each other in a region they consider central to their foreign policies.”

Contributing to the split is the fact that Trump administration officials appear to underestimate Europe’s attachment to the Iran deal and place too much emphasis on trade as a motive for that attachment.

The prospects for maintaining the nuclear agreement fundamentally rest on what Iran does next.

On May 26, Iran announced that it has set a deadline of May 31 for the EU to come up with a package of economic benefits as an incentive for it to remain in the 2015 agreement and that its own decision to stay in the deal is “weeks away.”

In addition, while Europe might appear more united over Iran than it was over Iraq in 2003, as reflected in recent joint statements expressing regret and disappointment over the US withdrawal from the Iran deal, as usual the picture is more complex.

Europe’s two key players, France and Germany, the United Kingdom, and other EU states, agree on the importance of preserving the deal. But France and Germany are reportedly pursuing different strategies toward the United States over Iran with “[French President Emanuel] Macron applying the pressure, whereas Germany seemed to shy away from a confrontation with Trump” because it is concerned about the US president’s plan to impose tariffs on German automobile exports to the United States, according to the German news magazine, Der Spiegel.

French companies, such as the oil giant Total, were some of the first to invest in Iran after sanctions were lifted in 2016.  Overall, only 0.3 percent of French exports go to Iran and 0.2 percent of Germany’s, which suggests trade is not the main European motivation for preserving the nuclear deal.

It is also unclear whether recent steps by Europe will be enough to prevent the Iran deal from falling apart.

On May 18, taking direction from EU leaders who met in Sofia, Bulgaria, the previous day, the European Commission announced that it would revise a blocking statute—last used in 1996—designed to protect European countries from US sanctions it sees as a violation of European sovereignty.

That is only the first step in a process that is likely to produce more intra-EU splits since some countries may not go along with its implementation.  For example, Poland’s foreign minister, Jacek Czaputowicz, has indicated his country is against “any EU sanctions that would weaken US actions.”

There are also proposals from the EU to make it easier for their smaller- and medium-sized companies to invest in Iran, to shelter Iran’s oil and gas income from new US sanctions, and other measures certain to draw the ire of US officials.

European companies’ relatively limited economic and commercial ties to Iran are vastly overshadowed by their economic ties to the United States. But here, too, US plans to impose tariffs on European steel and aluminum, which are expected to result in retaliatory EU tariffs on US imports, will only further increase the prospects for a transatlantic trade war.

European countries are undoubtedly trying to maintain commercial ties to Iran primarily to encourage that country to remain in the nuclear agreement that is so important to them, not for the limited economic benefit.

The JCPOA is also a symbol of the EU’s commitment to multilateralism, a rules-based international system, and its ambitions to play a larger role in the world.

For these reasons and because they see their multilateral agreement as the best way to prevent Iran from developing a nuclear weapons program, as opposed to what they perceive as unrealistic prospects for a new US-led agreement, EU and European officials are expected to continue pushing to preserve the deal despite risks of increased tension with the United States that may spill into other issue areas.

The dispute over Iran will soon force both partners to decide if they are willing to jeopardize their overall economic relationship with each other to purse their different approaches to containing Iran’s nuclear ambitions.

Europe and the Trump administration urgently need to reach a compromise. Failure risks increasing instability in the Middle East and exacerbating their other differences.