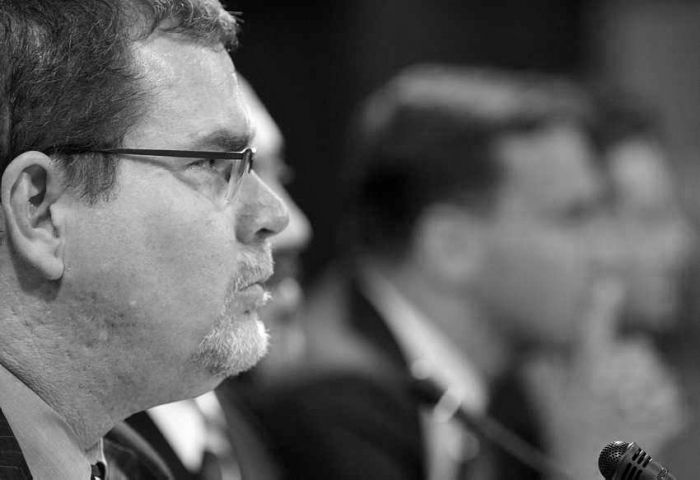 Today in Wroclaw, Poland, the Atlantic Council will posthumously award Ron Asmus its annual Freedom Award for his contribution to building a Europe whole, free and at peace.

Many U.S. leaders played a critical role in advancing this vision and giving the United States a defining role in post-Cold War Europe. President George H.W. Bush, President Bill Clinton and Secretary Madeleine Albright are among the leaders credited with articulating and pursuing a bipartisan policy that led to the enlargement of NATO providing permanent security to the formerly captive nations of Central and Eastern Europe.

Yet the vision of a Europe whole, free and at peace would not have become reality without Ron Asmus. His work outside of government at RAND laid the intellectual groundwork for policy by first proposing NATO enlargement and then effectively debunking the arguments against it. His enormous energy within government then ensured that a soaring vision became an achievable policy.

Since his death April 30th, many, especially Central and Eastern European freedom fighters directly impacted by his work, have offered tributes to Ron. I offer this tribute as someone whose career was shaped by Ron, my mentor.

In September 1998, I went to work for Ron, who was then Deputy Assistant Secretary of State for European Affairs, responsible for NATO. I began as a Presidential Management Fellow in the Department’s Office of European Political and Security Affairs. While I was the most junior employee in Ron’s bureaucratic domain with several layers of management in between, he became my mentor and task master.

I joined the State Department green with enthusiasm, lacking the cynicism a career at State seems to imbue in its officers. I came of political age during the West’s failure to prevent or stop the Balkans’ bloody wars (I traveled to and worked in the former Yugoslavia in 1993 and 1994). Bosnia, in conjunction with my service in Rwanda in the wake of the genocide, taught me that right and wrong could exist in international politics. And the West, and the United States in particular, had an ability and responsibility to lead the international community in standing up to thugs who threatened regional security, whether Slobodan Milosevic, Ratko Mladic or the Interahamwe militia.

This lesson led me directly from a fellowship with Save the Children as a humanitarian to a career in national security as a hawkish internationalist. Arriving at State in 1998, Ron gave me a chance to play a small role in shaping U.S. policy.

Our key task was to prepare the 1999 NATO Washington Summit, marking the 50th anniversary of the Alliance, by transforming the Cold War alliance further with new members, new missions, and new partners. This effort became more compelling as Milosevic began to replicate in Kosovo the bloodshed he helped provoke in Bosnia. We assumed a second clear task to defeat Milosevic’s forces in Kosovo.

In the heady months of September 1998 through the Summit in April 1999 and Milosevic’s defeat in June, Ron Asmus led the development of U.S. policy for NATO working in support of Secretary Albright, Deputy Secretary Strobe Talbott, and Assistant Secretary Marc Grossman. Ron turned increasingly to me to produce the first drafts of key policy memos and statements. He did this, he told me, in part because I was fresh out of grad school at Princeton and not a creature of the State Department bureaucracy. But he also recognized, and fueled, in me a passion for the post-Cold War Europe he was trying to create.

Given the opportunity by Ron to shape policy, I dived in. Foggy Bottom felt like a campaign headquarters as we simultaneously approached the Summit and war. I developed for Ron a weekly one-page update memo for Secretary Albright that tracked the progress we were making toward our top Summit deliverables in colorful bar charts. I worked with him after hours on Notes to the Secretary (memos which could bypass the normal clearance process) to help her prepare for the Sunday talk shows. Ron brought me in to help draft a key policy memo outlining our endgame strategy heading into the Summit. And Ron gave me the pen on the first drafts of the Secretary’s interventions at key North Atlantic Council ministerials in the lead up to the Summit.

I worked with Ron and the NSC to write the first draft of the Washington Declaration, the mission statement for the Alliance signed by all leaders at the summit in the Mellon Auditorium, reminiscent of the signing of the Washington Treaty founding NATO in that same hall. During the negotiations and against the backdrop of fighting in Kosovo, many allies objected to our line in the document underscoring our vision of a Euro-Atlantic community "where war becomes unthinkable." Ron dug in and we succeeded in keeping this as a core element of our vision for Europe.

Before Ron stepped down, he asked Albright to sign copies of the Washington Declaration for staff who played a key role in supporting the summit. That declaration with her signature hangs on my wall today in my Atlantic Council office. Each day I see it, and read the line "where war becomes unthinkable," I think of Ron and our unfinished business.

The best tribute we can offer Ron is to ensure the vision he worked so hard for is not forgotten as some cliché or quaint strategy in simpler times. As the United States understandably works to keep Europe focused on our global agenda, Ron would remind us that the United States still has a role to play helping to "complete Europe." His work is not yet finished.

Today, I work at the Atlantic Council as a direct result of Ron’s inspiration. I plan to honor Ron by continuing to advance a vision and a policy that leads to a Europe whole and free where war is unthinkable. In practice, this means integrating all of the Balkans into Europe, including ultimately Serbia, Bosnia and Kosovo into NATO and the EU; helping Moldova restore its territorial integrity, consolidate democracy and join the West; supporting Ukraine’s path toward Europe, preserving its democracy; backing the people of Belarus until they succeed in ridding themselves of Europe’s last dictator; and welcoming into NATO an increasingly democratic and ultimately whole Georgia.

This is an audacious agenda. But then again, in the early 1990s, Ron’s vision was considered even more audacious. As Ron receives a Freedom Award tonight in Wroclaw, there is no better way to honor his legacy than by succeeding audaciously.

Damon Wilson is Executive Vice President at the Atlantic Council, a former Senior Director for European Affairs at the NSC and a former NATO official.