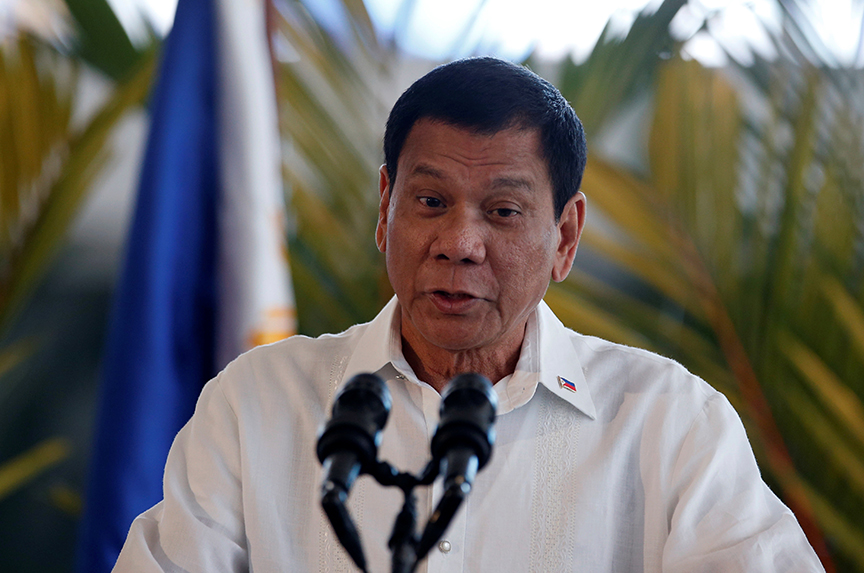 Tensions between the United States and the Philippines—a former US colony with which Washington has had a mutual defense treaty since 1951—have put a question mark over the future of the relationship and are being watched warily by countries in the Asia-Pacific.

Noting that the US-Philippines treaty alliance has been a “foundation for stability and security in the Asia-Pacific region,” Jamie Metzl, a nonresident senior fellow for technology and national security in the Atlantic Council’s Brent Scowcroft Center on International Security, said: “Many other countries in Asia, especially those fearful of Chinese aggression, are watching what happens in the Philippines and looking at how that might change the balance of power in the South China Sea.”

“For countries like Vietnam, that are for good reason extremely fearful of China’s behavior, Philippines’ actions could well encourage them to strengthen their relationship with the United States as a way of rebalancing Asia,” he added.

US President Barack Obama made a rebalance toward Asia a key part of his foreign policy. Amid this shift, Philippine President Rodrigo Duterte has unleashed vituperative rhetoric against both the United States and Obama. He has said Obama can “go to hell”; that the United States should not treat the Philippines “like a dog with a leash”; and has joked that his “favorite hero is [Russian President Vladimir] Putin.” Duterte is also against the presence of foreign troops in his country and has said that the United States can “forget” about a military alliance between the two countries.

On a visit to Beijing earlier in October, Duterte, specifically citing military and economic ties, announced the “separation” of the Philippines from the United States. “America has lost now,” the Philippine president said in Beijing. “I’ve realigned myself in your ideological flow and maybe I will also go to Russia to talk to Putin and tell him that there are three of us against the world— China, Philippines and Russia. It’s the only way.” Despite such rhetoric, competing claims in the South China Sea have been a source of tension between China and the Philippines.

Duterte’s tirade against the United States comes amid criticism from Washington of the Philippine leader’s aggressive anti-drug campaign in which thousands of suspected drug dealers and users have been killed.

“This [friction with the Philippines] is the first leg of a Chinese strategy to neutralize us in the South China Sea and pick off the ASEANs one by one,” said Robert A. Manning, a senior fellow in the Scowcroft Center, referring to the Association of Southeast Asian Nations.

“You will continue to see efforts [by China] to negotiate things bilaterally with the ASEANs, which makes it difficult for us to put together a counterbalancing strategy,” he said. “The problem for us has always been that you can’t fight geography. China is big and close and we are big and far. ASEAN countries have lingering doubts about our sustainability. They know China isn’t going anywhere.”

Metzl said that while the prospects of the defense treaty being abrogated are low, “one thing that is clear about the Philippines these days is that it is full of surprises.”

Jamie Metzl and Robert A. Manning spoke with the New Atlanticist’s Ashish Kumar Sen. Here are excerpts from our interview.

Q: Philippine President Duterte has said that the United States could forget about a military agreement between both countries if he were to be in power longer. What are the prospects of the mutual defense treaty being abrogated?

Metzl: At present, it seems that the prospects for the treaty being abrogated are low. But one thing that is clear about the Philippines these days is that it is full of surprises. Rhetoric has meaning and rhetoric has consequences. The United States is clearly trying to play down any tension, but certainly these extremely unhelpful comments have raised question marks in many people’s minds.

Manning: The public statements around [US Assistant Secretary of State for East Asian and Pacific Affairs] Danny Russell’s trip to Manila did not shed any light on Duterte’s “separation” from the United States. It is completely unclear what that means.

However, soon after his “separation” comment, Duterte visited Japan, our number one ally in the region. That visit clearly highlights the ambiguity of his comments.

We have access to five bases in the Philippines, including a strategically important base in Palawan near the contested Spratly Islands in the South China Sea. Whether Duterte is going to withdraw those commitments or try to constrain our operations we don’t know. He is a bit of a blowhard, so it’s hard to interpret what he says.

Duterte is totally out of step with Filipino opinion. A recent Pew poll found more than 90 percent of Filipinos have a very positive view of the United States. So there may be a popular political backlash against Duterte. A few years ago they elected [Joseph] Estrada, a B-grade actor, and there was a revolt against him. It wouldn’t shock me if something like that occurred again in the Philippines.

Q: What is the reason for the hostility from Philippines President Duterte toward the United States?

Metzl: Nobody other than maybe President Duterte fully understands what is happening. The US-Philippines relationship is fundamentally sound, but that doesn’t mean that every individual in either country has the same opinion. There are some people who are saying that this is some kind of strategic activity by President Duterte and others who are saying it is emotional and erratic. Either way these are very significant statements. The test will be what specific actions are taken. Rhetoric is one thing and action another.

Manning: There is a nationalist logic behind what [Duterte] has done. Obama went to Tokyo a couple of years ago and publicly declared that the US-Japan security treaty applied to the Senkaku Islands, which are disputed between China and Japan. The Filipinos wanted a similar commitment for Scarborough Shoal, which is a disputed island that China occupies, and the [Obama] administration, for better or worse, would not go that far.

Then you have Duterte’s murderous death squads going after drug people. The US Congress and others have criticized him for human rights violations. So if you want to put his outrageous use of language in context, that is kind of a backdrop to it. Beyond that there is a traditional Filipino love-hate relationship with the United States that goes back a hundred years.

We have had unrealistic expectations of a lot of the ASEAN (Association of Southeast Asian Nations) countries. Economically, China has become a lot more important to them than the United States. They want the United States around to offset China, but the last thing any of them wants to do is to choose between the United States and China.

Q: What are the implications of this friction not just on US ties to the Philippines, but also on US ties to the Asia-Pacific—a rebalance toward which President Obama made a central part of his foreign policy?

Metzl: Traditionally and today, the strong US-Philippines treaty alliance and relationship has been a foundation for stability and security in the Asia-Pacific region. Many other countries in Asia, especially those fearful of Chinese aggression, are watching what happens in the Philippines and looking at how that might change the balance of power in the South China Sea.

For countries like Vietnam, that are for good reason extremely fearful of China’s behavior, Philippines’ actions could well encourage them to strengthen their relationship with the United States as a way of rebalancing Asia.

Manning: The whole US strategy of counterbalancing China is premised on building a complementary security network to our alliances with Japan, Australia, and others. We are building this whole strategy on a thin reed.

The ASEAN nations have this Goldilocks idea of the US-China relationship. They don’t want it to be too confrontational. On the other extreme, they don’t want a US-China condominium that makes them irrelevant. They are uncomfortable no matter what we do.

This [friction with the Philippines] is the first leg of a Chinese strategy to neutralize us in the South China Sea and pick off the ASEANs one by one. You will continue to see efforts [by China] to negotiate things bilaterally with the ASEANs, which makes it difficult for us to put together a counterbalancing strategy. The problem for us has always been that you can’t fight geography. China is big and close and we are big and far. Asian countries have lingering doubts about our sustainability. They know China isn’t going anywhere.

Q: President Duterte has said he wants to align with China and Russia. What is the likelihood of this happening given the tensions that exist between the Philippines and China over competing claims to the South China Sea?

Metzl: It is very understandable that any Philippine leader would want to have strong economic relations with China. The United States has consistently encouraged those kinds of relations. But given that according to international law China is militarily occupying Philippine sovereign national waters, I believe there will be some domestic limitations from within the Philippines on how far President Duterte can go to accommodating Beijing.

Manning: It is unlikely. You are already hearing noises from the Chinese Foreign Ministry that they don’t want to get too close to [Duterte].

Russia is an actor in the North Pacific, but in Southeast Asia they are not an actor at all.

Don’t forget, we got kicked out in the 1990s by the Filipinos and then as Chinese assertiveness built up they were the ones that wanted us back and offered us access to all these bases.

Q: What’s at stake for the United States in the event of a falling out with Manila?

Manning: The obvious near-term thing is losing access to bases that are part of our military strategy.

More broadly, there are a lot of trends in the region that are beginning to raise doubts in a lot of Asians’ minds about US credibility. The Philippines is an extreme version. The Obama administration for several years now has been touting the Trans-Pacific Partnership (TPP) as the foundation of our reengagement in Asia. Unless he gets very lucky in the lame duck session, that may be dead and there will be a huge strategic price to pay in terms of our credibility in Asia.

There are also a lot of negative trends in the region. In Thailand, you have the junta which will be tilting toward China as we criticize them for breaking democracy; Aung Sung Suu Kyi in Burma is running up against the traditional power structure; Malaysia has a multibillion-dollar scandal and their prime minister has been talking about Sharia law and clamping down on civil rights and the press. All these elements will create a certain amount of tension. If you put the Philippines in that context you are looking at a problematic environment in the region in which the next US president will have to operate.

Image: Philippine President Rodrigo Duterte spoke to reporters at the Ninoy Aquino International Airport in Manila before his departure for Japan on October 25. (Reuters/Erik De Castro)