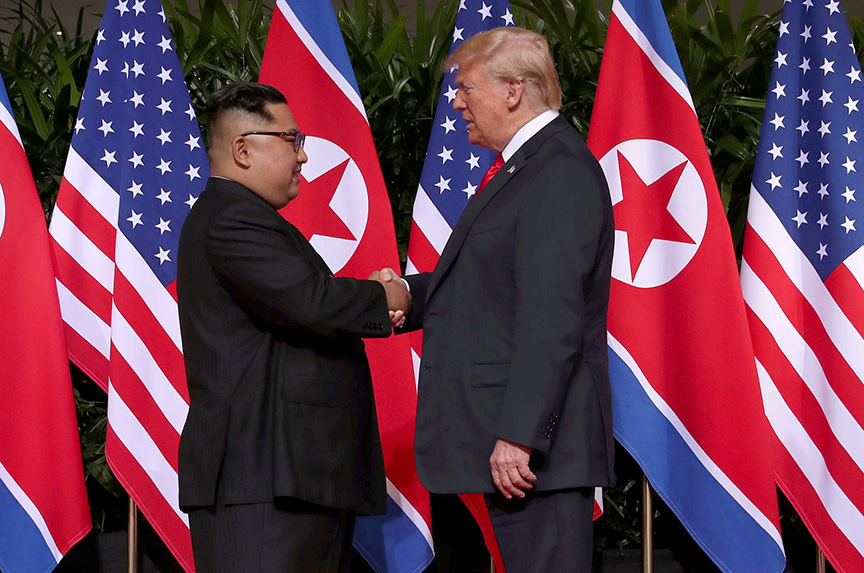 US President Donald J. Trump made history when he met North Korean leader Kim Jong-un in Singapore on June 12. This was the first time that a sitting US president has met the leader of North Korea.

Atlantic Council analysts shared their thoughts on the outcome of the summit. This is what they had to say.

Robert A. Manning, a senior fellow in the Atlantic Council’s Scowcroft Center for Strategy and Security.

“Beyond being an important first step, it is premature to pass any judgement on the summit, other than to say that there are some worrying things in the joint statement. There is some value in personal diplomacy, especially when it is a regime of one-man rule, so Trump gets credit for that. Past negotiators have met only with underlings.

“At the same time, for Kim to be able to present himself as an equal of the US president was a longtime goal, and a concession it is not clear that Trump even knows he made.

“But the language in the joint statement of halting US-ROK military exercises and building a peace regime suggests Trump’s disdain for alliances may have negative implications for the Korean Peninsula and more broadly for Northeast Asia. Is a phase-out of the US military presence in Korea what Secretary of State Mike Pompeo meant when he referred to new type of security assurances? What will the Japanese think of US alliance commitments?  Kim only repeated his vague commitment to complete denuclearization, with no timetable, no reference to verification.

“Other than a commitment to solve MIA cases from the Korean War, nothing specific was agreed to. Nor is there a clear follow-on diplomatic process other than Pompeo meeting with his North Korean counterparts. So far, this appears a triumph of hope over experience.”

“The Trump-Kim summit was a monumental victory for the North Koreans and a loss for the United States. In one fell swoop, President Trump legitimated the North Korean regime, undermined the nuclear nonproliferation system, eliminated US leverage, weakened sanctions, undermined the United States’ alliance with Japan and the international human rights system, and disempowered the US military, all in exchange for… nothing.

“Trump has given security guarantees to the world’s most brutal dictatorship that has killed millions of its own people and has up to 100,000 of its own citizens in horrendous prison camps. It’s a great day for North Korea’s totalitarian leaders, but truly a shameful day for the United States.

“Of course it’s better to have nice relations with any country, but the United States has paid far too great a price. Trump has criticized the alleged weakness of past administrations negotiating with the North Koreans, but how much weaker can a president be than to concede everything and gain next to nothing?”

Todd Rosenblum, is a nonresident senior fellow in the Atlantic Council’s Scowcroft Center for Strategy and Security.

“China, North Korea, and the US-South Korea security alliance are the big winners from the short, joint declaration.  But, there is little reason to believe that the United States advanced its core objective of achieving a non-nuclear Korean Peninsula any more than it has in the plethora of past pledges toward this goal since the early 1990s.”

The historic Trump-Kim summit succeeded in creating an opportunity to transform a hostile and adversarial relationship between the United States and North Korea into a more productive one.

The joint statement that followed the summit set the tone for both parties to work toward achieving a peaceful and denuclearized Korean Peninsula. However, Trump’s announcement that the United States will suspend joint military exercises with South Korea calls into question the future of the US-ROK alliance.

Trump has indicated that the United States and North Korea will move quickly to negotiate next steps toward security guarantees and normalization of US-North Korea relations. South Korea should be included in the process of achieving a peaceful and denuclearized peninsula. It is vital that the United States and South Korea closely coordinate and fully agree on any decisions that could impact the US-ROK alliance.

Whether or not to reduce or withdraw US troops deployed in South Korea should be a matter for the United States and South Korea to discuss and jointly decide on in a timely manner and with a detailed plan. It may be time to start thinking about redefining the nature of the US-ROK alliance, but in doing so, the future of this alliance should not be tied to the success of negotiations with North Korea. The aim of the US-ROK alliance should be to not only strengthen the bilateral relationship to help achieve the security goals of the United States and South Korea, but to also broaden areas of collaboration between the two countries.