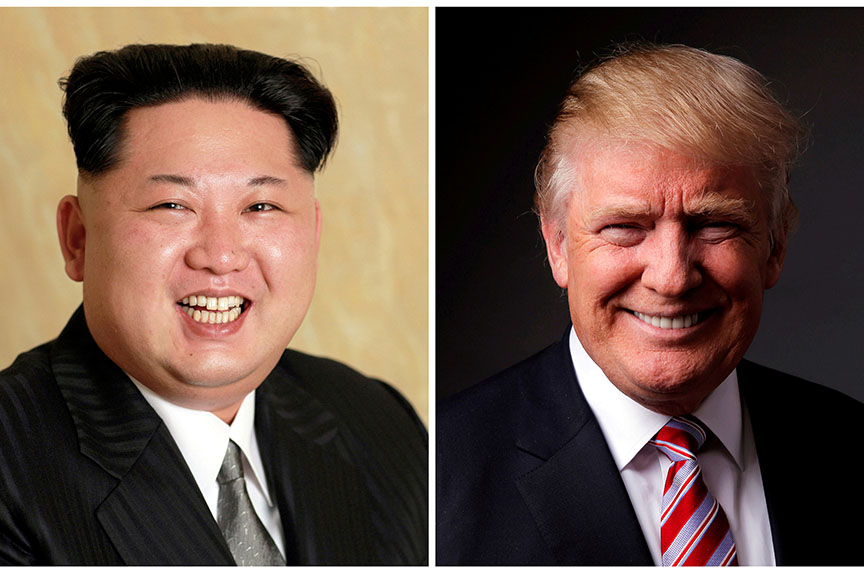 Last summer, US President Donald J. Trump threatened to unleash “fire and fury” on North Korea if it endangered the United States. A few months later, he derided North Korean leader Kim Jong-un as “Little Rocket Man” and said US Secretary of State Rex Tillerson was wasting his time attempting to negotiate with the regime in Pyongyang. Kim in turn threatened the United States noting in his new year’s day speech that he has a “nuclear button” on his desk and is ready to use it. Trump shot off a provocative tweet about the size of his own nuclear button, which he said was “much bigger and more powerful” than Kim’s.

In the backdrop of this war of words, North Korea conducted a series of missile tests, and even one nuclear test, while the United States led the international community in imposing unprecedented comprehensive sanctions on Kim’s regime. These sanctions aim to choke off the financing and fuel that have kept Pyongyang’s nuclear ambitions alive.

All this led to the surprise announcement on March 8 that Trump has accepted an invitation to meet Kim in May.

But the decision would not have come as a surprise to those who paid attention to US Secretary of State Rex Tillerson’s remarks at the Atlantic Council on December 12, 2017. In those remarks Tillerson said for the first time that the Trump administration was ready to talk anytime with North Korea “without preconditions.”

“Let’s just meet and let’s – we can talk about the weather if you want. We can talk about whether it’s going to be a square table or a round table if that’s what you’re excited about. But can we at least sit down and see each other face to face?” he said.

Trump’s decision is a high-stakes gamble. No sitting US president has ever met the leader of North Korea. It is a meeting that the regime has always craved.

While Trump gives the North what it wants, his decision to accept Kim’s invitation—an opportunity that US officials insist will be a meeting and not a negotiation—provides a welcome turn in a story that looked headed down the road to war just weeks ago.

Atlantic Council analysts shared their thoughts on Trump’s decision to meet Kim and offered guidance on how the US president and his team should approach this meeting. This is what they had to say:

“Forcing North Korea to the negotiating table was the primary purpose of Trump’s ‘maximum pressure’ campaign. The new diplomatic overture from North Korea, therefore, provides a possible opportunity for the United States to resolve the nuclear standoff peacefully.

“To increase our chances of success, the United States must engage in talks but not let up the pressure until we achieve the international community’s long-held goal of complete and verifiable denuclearization.”

“Kim’s extraordinary behavior since January 1 reflects the success of the US effort to mobilize the global community to isolate North Korea. It also shows that the comprehensive economic sanctions have disrupted North Korea’s economy and obviously Kim’s comfort level about the future.

“That said, Kim’s invitation could be a great opportunity to get commitments at the highest level to denuclearize, or it could be trap. The United States is not prepared to manage this issue—there is no US ambassador in Seoul, no North Korean envoy at the State Department. The administration has no idea of what the diplomacy should be. It is a bit like the dog chasing the car: then what?

“To prepare, first Trump should put off the meeting until the table has been set for it to achieve maximum results. Most importantly, he needs to appoint a presidential envoy to lead the US government process, someone at a high level, who has stature in Congress, internationally, and who Trump is comfortable with. My suggestion is Republican Sen. Bob Corker. He should insist on a neutral site—either the DMZ [demilitarized zone] or perhaps Geneva or Beijing.

“And finally, they should not try to reinvent the wheel. History is littered with failed deals we made with North Korea. I would urge them to use the September 2005 Joint Statement—which offers the North Koreans everything it could want but is a step-by-step process all sequenced on progress in dismantling the North Korean nuclear weapons program. It is a bit more complicated and we have to capture his ICBM [intercontinental ballistic missiles] as well. The United States needs to think through what it is prepared to offer on that.

“The trap—and our redlines—ought to be a nuclear freeze. Kim would like that as the end state, with the North with a status like Pakistan, accepted as a normal nuclear weapons state with all sanctions gone. Advocates such as South Korean President Moon Jae-in will call a freeze ‘an interim step.’ But I would say no to a freeze unless it is accompanied simultaneously by a process of dismantling and turning over their nukes.

“North Korean leaders have craved a direct meeting with a sitting US president for decades but never realized their goal until now because past US administrations have deemed such a meeting unwise. President Trump’s impetuous decision to meet with Kim Jong-un could hypothetically lead to a breakthrough but is far more likely to lead to a hangover.

“On the day of the meeting, Kim Jong-un will have already achieved much of what he wants—he will have a relatively deliverable nuclear arsenal and North Korea will be on an equal sovereign footing with the United States. Trump may be betting that Kim will eventually give up his nuclear arsenal in exchange for easing sanctions, but the benefit of easing sanctions will simply not compensate Pyongyang for the loss the power, prestige, and regime legitimation the North Koreans believe to stem from their nuclear arsenal.

“The North Koreans, on the other hand, will likely offer to denuclearize if the United States provides full diplomatic recognition, signs a peace treaty, and withdraws or significantly reduces its military presence in South Korea. Accepting this type of offer would be a disaster for the United States because it would leave our South Korean allies more vulnerable to North Korea’s conventional threat and send a dangerous message to our allies around the world that American security guarantees cannot be trusted.

“North Korea’s leaders are clearly outplaying and outsmarting Donald Trump. To even have a hope of taking advantage of this slight but very dangerous opening, the Trump administration needs an integrated and phased strategy that is coordinated with our allies, a far cry from what we’ve seen so far.”

Barry Pavel, senior vice president, Arnold Kanter chair, and director of the Scowcroft Center for Strategy and Security at the Atlantic Council (@BarryPavel).

“I give credit to the Trump administration both for orchestrating an unprecedented and relentless pressure campaign that undoubtedly played a role in changing the North Korean leader’s approach, as well as for agreeing to this bold initiative to meet with North Korean leader Kim Jong-un.  After all, the policies of the three previous administrations toward stopping the progress of North Korea’s nuclear and missile programs haven’t just failed, but they’ve failed utterly.  North Korea’s programs have accelerated, and if allowed to continue on their current trajectories, will lead the world to a much more dangerous and fragile security environment, one which could potentially fracture the United States’ valuable alliances in Asia and elsewhere.

“That said, I hope that the price that the Trump administration extracts from North Korea before the two leaders show up at the same table is significant.  I don’t think that promises to denuclearize and ‘de-missilize’ should be enough. There should be real, verifiable moves in these two critical directions before the president sits down to talk.  Such moves wouldn’t be irreversible, but they would demonstrate that North Korea may move in a more productive direction under Kim Jong-un than it did under his father and grandfather.”

Alexander Vershbow, distinguished fellow, Atlantic Council’s Brent Scowcroft Center for Strategy and Security. He served as the US ambassador to South Korea from 2005-2008 (@ARVershbow).

“Our South Korean allies did an excellent job in persuading Kim Jong-un to meet the United States’ conditions for negotiations—denuclearization as the declared goal of the talks, suspension of nuclear and missile tests during negotiations, and no requirement to halt ROK-US military exercises or ease sanctions prior to the talks.

“But it remains to be seen if the North Koreans are prepared to set realistic conditions for denuclearization (security guarantees, peace treaty, diplomatic relations, etc.) or whether they will demand an unacceptable price (withdrawal of all US forces, termination of the ROK-US defense alliance).  Indeed, caution is essential since the North Koreans have not yet confirmed publicly, or informed their own people, about the results of the talks with the South Korean delegation.

“High-level diplomatic engagement with Pyongyang between now and the summit is essential to gauge the North Koreans’ intentions and establish what deliverables can be achieved when the two presidents meet.

“It is worrisome that the US government, more than a year after the start of the Trump administration, does not have a high-level team of experienced professionals to prepare the ground for the summit. Assembling such a team, and defining a negotiating strategy in coordination with US allies, are now the most urgent priorities. This is not the time to ‘wing it.’”

Image: US President Donald J. Trump (right) has taken up North Korean leader Kim Jong-un's invitation for a meeting. The meeting will take place in May. (Reuters/KCNA)