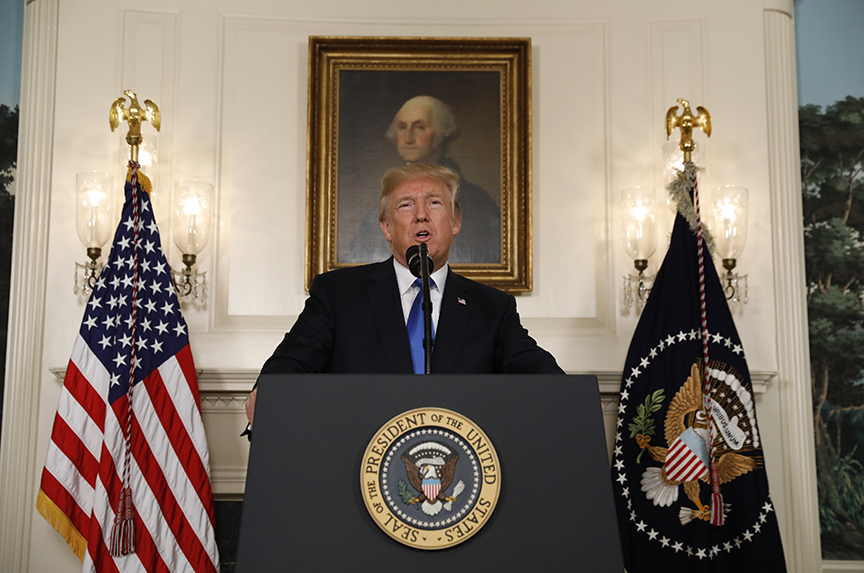 As expected, US President Donald J. Trump on October 13 announced that he will not certify Iran’s compliance with the terms of a multilateral nuclear deal, accusing the Islamic Republic of “not living up to the spirit” of the agreement.

While Trump did not take the United States out of the deal, he asserted the right to do so and warned that he would if the US Congress does not make amendments to the agreement.

At the top of the list of amendments Trump would like is for Congress to address the issue of the “sunset clauses” in the deal. These clauses lift certain restrictions placed on Iran ten to fifteen years after the agreement took effect in January of 2016. However, even at that time, Iran would be prohibited from developing a nuclear weapon and be subjected to intrusive inspections.

Iran and the five permanent members of the United Nations Security Council (the United States, the United Kingdom, France, Russia, and China) and Germany struck the deal, known as the Joint Comprehensive Plan of Action (JCPOA), in 2015.

Iran and the United States’ European partners in the agreement have made it clear that the deal cannot be renegotiated. In the US Congress, signs emerged this week that Trump will face an uphill battle to garner the support necessary to make legislative changes to the agreement.

Meanwhile, Trump’s decertification decision means that the US Congress has sixty days to consider re-imposing sanctions on Iran that were lifted under the terms of the JCPOA.

In his address on October 13, Trump also announced a tough new strategy toward Iran. This is strategy will be based on: countering Iran’s support for terrorism and, more specifically, fresh sanctions on the Islamic Revolutionary Guards Corps (IRGC); revitalizing traditional US relationships in the Middle East: addressing Iran’s ballistic missile program; and denying Iran a path to a nuclear weapon.

Earlier, former US officials and Atlantic Council analysts had warned against decertification.

On October 13, Atlantic Council analysts shared their thoughts on the latest development. This is what they had to say:

Daniel Fried is a distinguished senior fellow in the Atlantic Council’s Future Europe Initiative and Dinu Patriciu Eurasia Center. He is the former coordinator for sanctions policy at the US Department of State.

On the decision to decertify: “First, whenever you throw something over to Congress, you’re taking a risk. Second, by trashing the agreement and suggesting he could pull out of it at any moment, he didn’t do any favors with our European and other partners with whom we negotiated the JCPOA. The large problem of the administration’s policy is that it feels like we were negotiating with ourselves, as if the president was trying to find a way to square his campaign promise with the realities of an actual Iranian policy that has a chance of working… Coming up with a Washington compromise to fit your campaign rhetoric into reality doesn’t actually advance our goal.”

“There’s a place for toughness, but you have to know when to cut your deal.

“The good news is, we still have a viable policy. The bad news is, it may have gotten harder, not easier.”

President Donald Trump’s decision, which does not come as a surprise, undermines the trust and credibility of the United States among its allies and the international community. While some of Trump’s criticism of Iran’s behavior in the Middle East is valid, advocating decertification removes any incentive for Iran to check its actions and roll back its nuclear and missile program. President Trump’s statement adds fuel to the fire in an uncertain neighborhood fraught with security challenges. It also raises the probability of the isolation of the United States from its European allies.

Amir Handjani is a nonresident senior fellow in the Atlantic Council’s South Asia Center. Follow him on Twitter @ahandjani.

On Trump’s Iran strategy: “Trump’s speech was riddled with hyperbole and factual inaccuracies. His Iran policy rollout was nothing but more of the same. It is very clear that he wants to get out of the JCPOA, but he is constrained by the fact that the other negotiating partners want to stay in the deal. Trump also doesn’t have the kind of support he needs in Congress to get out of the deal, including from much of the Republican leadership. We already have one nuclear crisis in the world, we don’t need another one.”

“What Trump did today is to isolate the United States from the world. The global community wants to address other aspects of Iranian behavior, but they want to deal with that separately, they don’t want to reopen the nuclear deal.”

On how Iran will respond: “You will see a natural reconciliation between the hardliners and the moderates. Iran has a history where when they are attacked by an outside force everyone unites. Trump thinks his speech is going to divide Iran; I think it is actually going to unite the country.”

David Mortlock is a nonresident senior fellow in the Atlantic Council’s Global Energy Center. Follow him on Twitter @yotus44.

“What the president did is lay bare his complete disdain for the [JCPOA] and seeming lack of commitment or even concern whether we stay in it or not.

“Not much has changed today. Looking forward, we have a worst-case scenario that the JCPOA is tied to conditions and we end up in a sequester-like drive toward collapse and withdrawal. Best-case scenario, this may just be a Washington storm, and we march ahead.”

Brian O’Toole is a nonresident senior fellow in the Atlantic Council’s Global Business and Economics Program. Follow him on Twitter @brianoftoole.

On Trump’s announcement on the nuclear deal: “As was expected, today’s decertification announcement by the president culminates months of work to effect little, if any, actual change to the status quo with respect to Iran.  Despite the threats, US withdrawal from the JCPOA absent a serious Iranian breach would turn our closest allies against the United States and undermine any leverage sought through renewed nuclear sanctions.

“Much hard work remains for the administration to work with Congress and our JPCOA partners, especially those in Europe, to devise a strategy that ensures the United States does not break the JCPOA, while credibly moving to contain Iran’s ballistic missile program, support for terrorism, and destabilizing activities in the region.”

On what the European Union (EU) can do: “The EU should continue, as it has, to insist that the United States continue to implement its commitments under the JCPOA unless and until Iran breaks the deal.  And the EU should consider what steps it could take to constrain Iranian aggression that runs counter to United Nations Security Council Resolution 2231, which affirms the JCPOA, such as fully sanctioning Iranian-supported terror group Hezbollah and sanctioning Iran’s support lines to Assad regime, including Mahan Air.  An EU push to contain Iran’s aggression in the region may help convince the Trump administration that the JCPOA is worth preserving.”

On action against the IRGC: “While this is a potentially useful stigma to attach to the entirety of the IRGC, it is important to note that designating the group as a terror organization has no legal impact as far as sanctions are concerned. The IRGC was already designated under several sanctions authorities and remained subject to secondary sanctions even after JCPOA Implementation Day.”

Aaron Stein is a resident senior fellow at the Atlantic Council’s Rafik Hariri Center for the Middle East. Follow him on Twitter @aaronstein1.

The JCPOA is a simple compromise: Sanctions relief for stringent verification of a limited Iranian enrichment program. The president’s decision risks stringent verification for an ill-defined strategy that only makes sense if his true intent is to use sanctions to topple the Iranian regime. This policy used to be called Strategic Patience, but we were told that this was a euphemism for “American retreat and cowardice.” The JCPOA may not fall apart. But let’s be clear about the consequences if it does: Iran will continue to enrich uranium, just without any of the limits the JCPOA imposes. The limits in excess of Iran’s commitments to the [nuclear Non-Proliferation Treaty] won’t expire until 2040. For most people, having more access to Iran’s nuclear program is a good thing. For others, it’s a nuisance because cordial relations with a problematic regime means you can’t try and use coercive tools to topple it.

Barbara Slavin is the director of the Future of Iran Initiative at the Atlantic Council. Follow her on Twitter @barbaraslavin1.

The Joint Comprehensive Plan of Action is a UN Security Council resolution and thus is international law. It cannot be unilaterally renegotiated or abrogated by any party absent a material breach of the agreement. If President Trump carries out his implicit threat to re-impose nuclear-related sanctions on Iran while Iran is fully complying with the JCPOA, the United States will be in material breach, which could give Iran the justification for resuming currently banned nuclear activities. The rest of the international community will now have to show the leadership currently lacking in Washington and preserve this important nonproliferation agreement.

Rachel Ansley contributed to this article. She is an editorial assistant at the Atlantic Council.

Image: US President Donald J. Trump, speaking at the White House in Washington on October 3, said he would not certify Iran’s compliance with the terms of the nuclear deal. (Reuters/Kevin Lamarque)