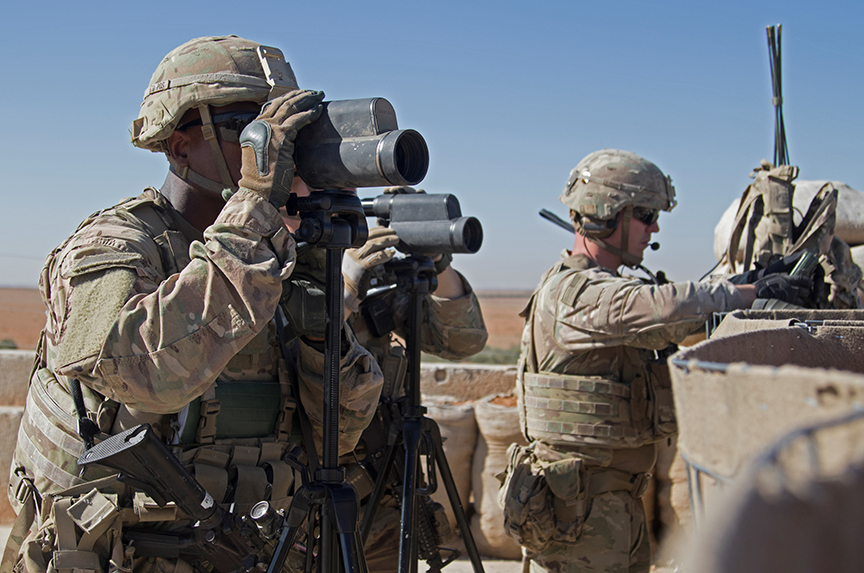 There is strategic logic, political logic, and then there is Donald Trump logic.

On Syria, political, military, and strategic logic was conveyed to US President Donald J. Trump by his secretary of defense and other advisers, very likely in the State Department and intelligence agencies, but certainly in Congress, where Sens. Lindsey Graham (R-SC) and Marco Rubio (R-FL) have strongly advised against a hasty withdrawal of US troops from Syria.  Among other things, Trump’s decision to pull US troops out of Syria without a thought-through discussion and coordination with NATO allies, who have supported the war on ISIS, has angered senior advisers in and out of the administration.  Trump’s logic, by all indications, is mainly focused on domestic politics.

Militarily, the balance of power in Syria has been gradually shifting against the United States for several years now. It may indeed by too late to try to reverse it at this point.  As small as the US force in northern Syria has been in the past year, it has accomplished the following: provided support  and training for the Syrian Democratic Forces (SDF), primarily made up of Syrian Kurds—a force that has carried the burden of on-the-ground fighting against ISIS and has remained vigilant against any return of ISIS fighters to central Syria.

The US force has also served as a deterrent against a potential invasion of northern Syria by Turkey and the eastward spread of Russian troops, currently deployed only west of the Euphrates River.

While the NATO war against ISIS has mainly been conducted from the air, the presence of a ground force is generally considered optimal for providing guidance and intelligence to those conducting aerial surveillance and bombardment.

Politically, while Russia, Iran, and Turkey are discussing Syrian political transition in Geneva, the United States has been largely left out of this important discussion. Much like in a poker game, if you have no stake on the table, you are out of the game.

Both the Obama and Trump administrations have been against the continued presence of Bashar al-Assad at the helm in Syria. Further, both have decried the growing influence of Iran and the direction a restored Assad foreign policy might take in the future.  The cold war, which has been brewing for years between Saudi Arabia and Iran, tips heavily in favor of the Iran-Syria axis with the departure of the US troops from Syria. Without a politically tempering Western influence north of the Gulf, that cold war is likely to get dangerously warmer.  While a military role for the United States may not be the answer to these questions, in the absence of a serious diplomatic push, the US military withdrawal sends a signal of total disengagement.

The merits of the decision to pull out of Syria aside, the way in which this decision was made has much to do with the ire of Secretary of Defense James Mattis and other senior national security advisers. Trump, one of the few presidents to come into the presidency without any military experience and indeed without any government experience, made this decision without thoroughly vetting it with the military and intelligence communities, let alone with his closest NATO allies.

Tensions between Mattis and Trump have been brewing for months, starting with the president’s decision to exit the Iran nuclear deal to Russia’s aggressive moves on the Ukraine and the ordering of US troops to the border with Mexico. Trump has been overruling his generals on practically every national security matter.  This has driven first Lt. Gen. H.R. McMaster, then Gen. John Kelly, and now Gen. Mattis from office.  Retired Gen. Michael Flynn, of course, brought his departure on himself by breaking laws and ethical codes of conduct for someone in such high office as the national security advisor.

Add to this the recent announcement by the Trump administration that the United States will withdraw from the medium-range ballistic missile treaty it signed with Russia decades ago and you have some very serious changes in US strategy being made against the advice of seniors in the intelligence, military, and congressional communities, and almost on a whim by someone who has no demonstrated competence in these areas.  History of two world wars shows that US disengagement may make war more not less likely—and the Cold War with the Soviet Union proves the old adage, an ounce of deterrence often helps avoid armed conflict.

In the case of Syria, Israeli Prime Minister Benjamin Netanyahu has already announced Israel will up its military role to compensate for US withdrawal.  If a war erupts between Iran and Israel, US involvement would almost certainly follow.

Trump’s decision to withdraw US troops from Syria, as has been the case with many other issues over the past two years, was relayed in a very short message on Twitter. From his own explanations, and those of his spokespeople at the White House, it seems that his goal was mainly to send a mission-accomplished statement to his core electoral base, indicating that a campaign promise has been fulfilled, at a time when he may lose the vote and congressional support to fund his promise to build a wall on the border with Mexico.

All this also comes at a time when the Special Counsel Robert Mueller’s investigation seems to be bringing indictments closer to the Trump family and possibly to Trump himself.  Withdrawal as a distraction tactic is not a far-fetched explanation for Trump’s decision.

Behind the scenes, Trump has had a recent conversation with Turkish President Recep Tayyip Erdoğan and reportedly the latter’s agreement to purchase a $3.5-billion Patriot defense system from the United States may have convinced Trump to agree to leave northern Syria for the Turks to do as they please with Kurds without US troops getting in the way. Right or wrong, this is a very bad impression to leave with allies and foes alike especially in the volatile Middle East where things that go wrong in the region do not stay in the region.

Image: US troops surveyed the area during a combined joint patrol in Manbij, Syria, on November 1, 2018. (Courtesy Zoe Garbarino/US Army/Handout via Reuters)