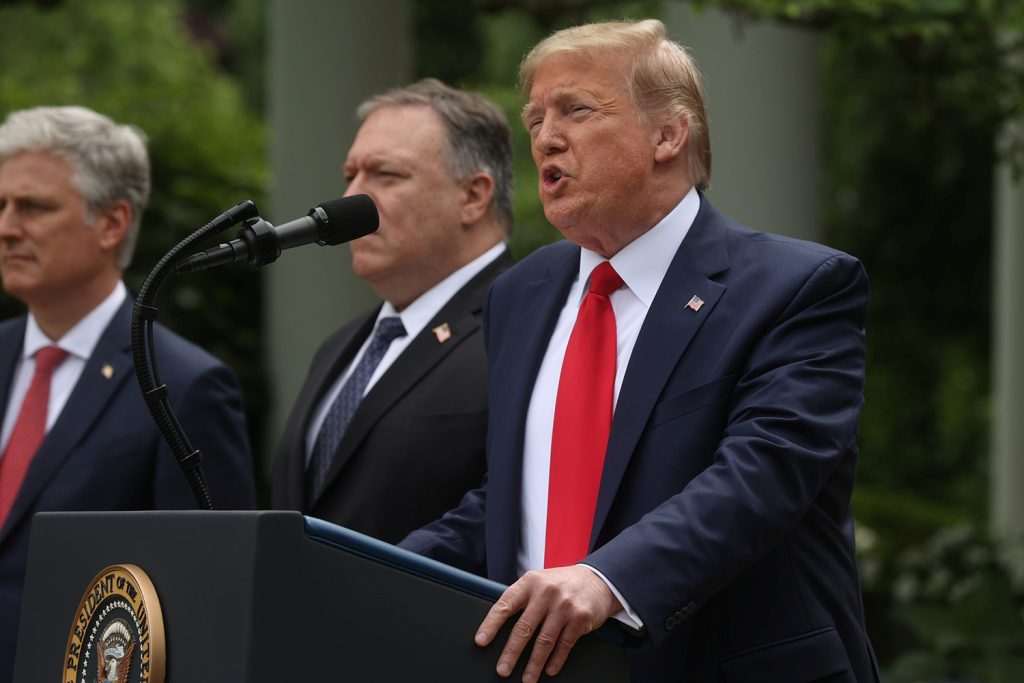 Trump has repeatedly accused Beijing of failing to contain the coronavirus in the first months of 2020 and of exerting undue influence over the World Health Organization (WHO) in an attempt to cover up the extent of the outbreak in the country. Following his announcement on April 14 that he was halting funding to the WHO due to its purported bias toward China, Trump said on Friday that the United States would now be “terminating our relationship with the World Health Organization and redirecting those funds to other worldwide and deserving urgent global public health needs.”

Trump also took aim at a new Chinese national security law that could endanger Hong Kong’s special autonomous status and grant authorities in Beijing more power to punish dissent. Trump said the law is a “plain violation of China’s treaty obligations” and that it means “Hong Kong is no longer sufficiently autonomous to warrant the special treatment that we have afforded the territory.” He added that US officials will begin removing special economic and diplomatic statuses from Hong Kong to reflect this change, as well as potentially sanction Chinese and Hong Kong officials and study ways to punish Chinese companies listed in US financial markets.

So what’s the significance of these moves? Here’s how the Atlantic Council’s experts are assessing these dramatic developments:

Xi Jinping is killing the goose that laid the golden egg.

“Trump’s announcement that the US government will no longer recognize a special status for Hong Kong is a good start. It is telling of [Chinese President] Xi Jinping’s leadership that he is prioritizing political control over economic growth. He backtracked on promised economic reforms, and now, by cracking down on freedom in Hong Kong, he is killing the goose that laid the golden egg. Already, firms and money are looking to flee Hong Kong to other parts of Asia. And this move by the United States will increase further the economic pain Xi feels from this decision.”

– Matthew Kroenig, deputy director of the Scowcroft Center for Strategy and Security

US-China relations have now reached lows not seen since Tiananmen.

“The decision by President Trump to end Hong Kong’s special trading status following Beijing’s plans for a national security law, a move that badly undermined Hong Kong’s promised freedoms, deals a devastating blow to the territory’s future and to the US-China economic and political relationship. The downward spiral in the bilateral relationship has now reached lows not seen since the June 4, 1989 Tiananmen massacre and there is little reason to expect things to get better soon.”

– Dexter Roberts, nonresident senior fellow in the Atlantic Council Scowcroft Center for Strategy and Security’s Asia Security Initiative and author of the recently-released The Myth of Chinese Capitalism: The Worker, the Factory, and the Future of the World

No country can manufacture everything within its own borders.

“However, restructuring global supply chains is a long-term project and will require a coordinated, multilateral effort with allies and partners, as no country is capable of efficiently manufacturing everything within its own borders. While the developing US drive seems like an effective start down the path toward diversifying and better securing supply chains against any major disruptions, the best strategic path forward will come from the United States re-evaluating its protectionist trade policy driven by its skepticism of globalization, as well as re-considering a multilateral approach.”

Today’s actions will do little to influence Hong Kong’s fate.

“The actions the president announced today fall heavily on Hong Kong residents, and on US influence by withdrawing from the WHO during a pandemic. What’s striking is how little the actions announced today will do in influencing the fate of Hong Kong.”

The darkest cloud is over the people of Hong Kong.

“President Trump’s statements and actions today accelerate the free fall of US-China relations and will hasten the fading of Hong Kong as Asia’s premier global finance hub and its role as a base of operations for global businesses operating in China and across Asia. It casts a dark cloud over some 1,300 US firms and 80,000 Americans in Hong Kong as well as a $67 billion annual trade relationship. But the darkest cloud is the one over the people of Hong Kong, whose freedom of action is no more. The extent of how much of Hong Kong’s separate economic relationship—trade, technology, financial markets—with the United States will be removed is to be determined, but the administration can calibrate its actions. China is heavily dependent on Hong Kong for many of its financial operations, but Beijing may just move them to Singapore or London.

“The US withdrawal from the WHO appears part of an unwise pattern of retreat and erosion of the world order that the United States created after World War Two. It is likely the United States will end up more isolated. With regard to reshoring supply chains, obviously essential medical equipment and the defense industrial base make sense. But markets and market forces matter, and autarky is not compatible with US global competitiveness. No man is an island.”

– Robert A. Manning, resident senior fellow in the Scowcroft Center for Strategy and Security

WHO decision will be greeted with dismay by many developing countries.

“The decision by the Trump administration to terminate funding to the WHO in the middle of a global pandemic will be greeted with dismay by the many developing countries who depend on the WHO for funding and expertise.”

Image: US President Donald Trump makes an announcement about US trade relations with China and Hong Kong as White House National Security Advisor Robert O'Brien and US Secretary of State Mike Pompeo listen in the Rose Garden of the White House in Washington, US, May 29, 2020. REUTERS/Jonathan Ernst