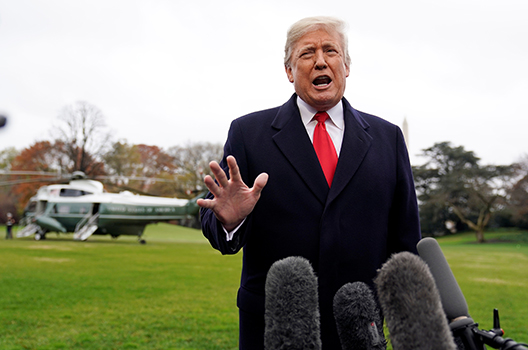 US President Donald J. Trump has cast doubt on the possibility of completing a US-UK free trade agreement under the terms of the Brexit deal British Prime Minister Theresa May has negotiated with the European Union.

“I think we have to take a look at, seriously, whether or not the UK is allowed to trade, because, you know, right now, if you look at the deal, they [the UK] may not be able to trade with us,” Trump told reporters on November 26.

May rejected Trump’s characterization, saying: “We will have the ability, outside the European Union, to make those decisions on trade policy for ourselves. It will no longer be a decision being taken by Brussels.”

Brexit supporters had touted the ability to conduct an independent trade policy with non-EU countries as one of the main advantages of the UK leaving the EU.

So, who has it right?

In this case, Trump is correct.

The draft Brexit agreement, which still needs to be ratified by the UK and EU Parliaments, sets out the terms for an orderly separation of the UK from the EU. May is struggling to prop up support for the plan, which currently faces uncertain odds in a crucial House of Commons vote scheduled for December 11.

If all goes according to May’s plan, the UK will formally leave the EU on March 29, 2019. A transition period will then open, running at least until 2020, or what’s more probable, until 2022. During this period the UK and the EU will attempt to hash out a comprehensive deal regulating all aspects of their future relationship.

During this transition phase, the UK will still be subject to EU rules, although it will not have a say in them. These rules include trade policy, which will remain in Brussels’ hands. The UK’s inability to dictate its own trade regulations during this period effectively precludes it from concluding a free trade agreement with the United States or other non-EU countries. Even if it has already started negotiating new trade relationships with third countries, nothing could be implemented until the transition period expires.

If a comprehensive agreement on future relations is not reached during the transition period, a “backstop,” or back up plan, will automatically come into force. The backstop states that the UK will remain inside a customs union with the EU. The potential that the UK and EU will not reach agreement and need this backstop is a significant source of uncertainty, limiting the incentives of any third country to consider entering into negotiations with the UK.

Once the transition phase is over, two scenarios are possible:

In the absence of a future deal, the backstop automatically kicks in, and the UK remains inside a customs union with the EU. That means that US goods exported to the UK or the EU will face the same tariffs, which will be controlled by Brussels. The UK will be unable to establish its own independent trade policy on goods under this scenario.

However, trade deals typically cover much more than just tariffs on goods. The UK could indeed establish its own set of non-tariff rules and regulations, which are known as non-tariff barriers. Furthermore, the UK will also be able to dictate its own policy regarding trade in services. This is an important point: the City of London is a major global hub for financial services. The UK is adamant to preserve the City’s current prominent status and will seek to promote UK financial services in third countries. While this may seem appealing to London policy makers, other countries are unlikely to grant such access unless the UK also concedes to open its good markets to external competition. Since the UK would need to stay within the customs union under the backstop, Brussels would oversee trade in goods, and the UK would find itself with reduced leverage to establish a fully independent trade policy.

Finally, if a future deal is completed, the UK could have a freer hand over its trade policy starting in 2020 or 2022. There is an important caveat: the content of the future deal could significantly limit such independence. There are already signs that it would indeed prove hard for London to steer away from the EU’s regulatory orbit. On November 25, the EU and the UK signed a binding political declaration establishing the guiding principles for a future relationship. The declaration states that the UK will closely follow EU standards and rules, particularly when they could affect competition. This clause, intended to guarantee a “level playing field,” will in effect limit the UK’s ability to conduct a robust independent trade policy.

With his comments, Trump has brought increased attention to a significant weakness of May’s Brexit plan, namely the inability of the UK to craft its own trade policy. Trump is thus aligning himself with critics within May’s own party, who already cite this very reason to oppose her plan. The vote on December 11 will determine which side carries the day.

Alvaro Morales Salto-Weis is a program assistant in the Atlantic Council’s Global Business and Economics Program. Follow him on Twitter @alvarosaltoweis.

Image: U.S. President Donald Trump talks to reporters before boarding the Marine One helicopter to begin his travel to Mississippi from the White House in Washington, U.S. November 26, 2018. (REUTERS/Jonathan Ernst)