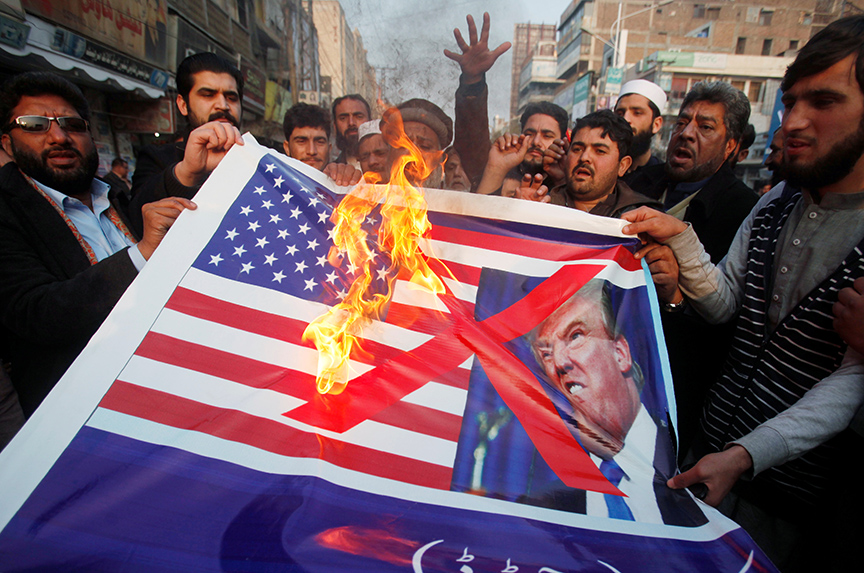 The Trump administration has cut off what is expected to be as much as $1.3 billion in annual security aid to Pakistan in an effort to compel this South Asian nation to end its support for terrorists. Is this a winning strategy? Unlikely.

The United States has a longstanding relationship with Pakistan. However, in recent years it has become strained by Pakistan’s continued support for terrorist organizations which directly harm US interests. Though it is a complex issue with a long history, US President Donald J. Trump has decided to get tough with Pakistan.

Hang on. Where is Pakistan?

Pakistan is located in South Asia. It is bordered by India on the east, Iran and Afghanistan on the west, China in the north, and the Arabia Sea in the south.

Pakistan became independent from India in 1947 after a bloody partition that followed nearly two centuries of British rule. Since 1947, Pakistan and India have fought four wars, including one undeclared war in 1999. (The others were in 1947, 1965, and 1971.)

Why is Pakistan important to the United States?

During the Cold War, the United States forged a relationship with Pakistan in an effort to limit the spread of Soviet influence. The Soviets had developed warm ties with India, which declared itself nonaligned during this period.

In the decade that spanned from 1979 to 1989, the United States and Pakistan worked jointly to support Afghan mujahideen who were fighting the Soviet army. Defeated, the Soviets ultimately withdrew from Afghanistan in February of 1989.

Fast forward to 2001. A US-led coalition invaded Afghanistan in October of 2001 and toppled the Taliban government because it refused to hand over Osama bin Laden, the leader of al Qaeda which was responsible for 9/11—the deadliest terrorist attack in US history.

The US-led coalition in Afghanistan has since relied heavily on logistical support from Pakistan. US military flights into Afghanistan travel through Pakistani air space, and the coalition and Afghan National Security Forces depend on vital ground supply routes that are controlled by Pakistan. If Pakistan shuts off these ground supply routes, the United States would have to use a northern route through Central Asian nations, which is far more expensive.

Mindful of this logistical dependence, US administrations have been reluctant to push Pakistan too hard to act against terrorists. Pakistani officials worry that groups like the Taliban and the Haqqani Network could turn on them if they made a real effort to root out the terrorists. US officials fear that this could trigger the collapse of the state and allow terrorists to get their hands on nuclear weapons.

What did Trump say?

In his first tweet of 2018, Trump said that the United States had “foolishly” given Pakistan more than $33 billion in aid over the past fifteen years and had received nothing but “lies & deceit” in return. “They give safe haven to the terrorists we hunt in Afghanistan, with little help. No more!” he added.

The United States has foolishly given Pakistan more than 33 billion dollars in aid over the last 15 years, and they have given us nothing but lies & deceit, thinking of our leaders as fools. They give safe haven to the terrorists we hunt in Afghanistan, with little help. No more!


Haven’t we heard this before?

Yes, we have. Former US presidents Barack Obama and George W. Bush independently came to the conclusion that Pakistan was not doing enough to root out terrorism within its borders. The Obama administration acted unilaterally against terrorists in Pakistan, picking off leaders using drone strikes and on-the-ground operations that were cloaked in secrecy. [More about this later.] In July of 2011, the Obama administration suspended about $800 million in aid to Pakistan. That did little to change Pakistan’s behavior.

Does Pakistan provide sanctuary to terrorists?

US, European, and Afghan officials have long asserted that Pakistan provides safe havens to terrorist groups such as the Haqqani Network and the Taliban. These terrorists live in remote mountainous hideouts and in populous cities such as Quetta and Peshawar and Lahore. While many of these groups, responsible for violent attacks, are considered terrorists by the international community, Pakistan’s military and intelligence service [the ISI], in particular, view them as proxies that are critical to maintaining “strategic depth” in their neighborhood.

The concern about terrorist safe havens was driven home on May 2, 2011, when US Special Forces tracked down and killed bin Laden in his mansion in the Pakistani garrison city of Abbottabad. The al Qaeda leader had been living in Pakistan for years, less than a mile from a premier military academy.

In this file photo, US President Barack Obama (second from left) and Vice President Joe Biden (left), along with Secretary of State Hillary Clinton (second from right), Defense Secretary Robert Gates (right), and members of the national security team, monitored the US Special Forces’ operation that resulted in the death of al Qaeda leader Osama bin Laden in Pakistan on May 1, 2011. (White House/Pete Souza via Reuters)

What has the Trump administration done?

On January 4, the State Department announced that it was suspending security assistance to Pakistan on the grounds that Pakistan is supporting anti-United States terrorists in Afghanistan. US aid to Pakistan includes reimbursements for counterterrorism operations or so-called Coalition Support Funds. Around $1.3 billion in annual aid is expected to be cut.

Richard G. Olson, who served as the US ambassador to Pakistan from 2012 to 2015 and the special representative for Afghanistan and Pakistan from 2015 to 2016, wrote in the New York Times: “While perhaps it is emotionally satisfying to penalize a country that has supported American enemies in Afghanistan for the past sixteen years, the administration’s approach is unlikely to work. Pakistan has greater leverage over us than many imagine.”

Most important among that leverage is Pakistan’s vital support of US forces in the war in Afghanistan, and its ability shutoff that spigot of cooperation. In 2011, for example, Pakistan closed crucial ground supply routes after NATO helicopters attacked a Pakistani border post, killing twenty-five Pakistani soldiers. Pakistan reopened the supply routes in 2012 after the United States apologized for the soldiers’ deaths.