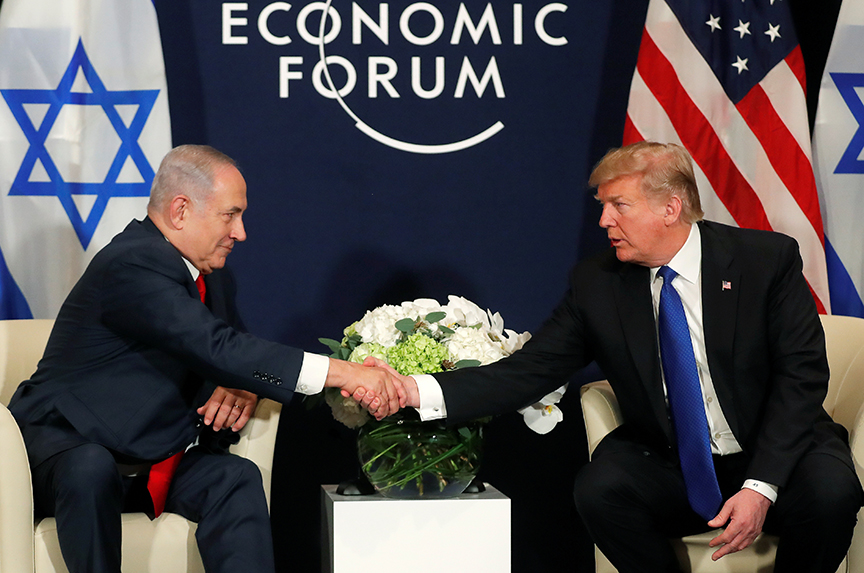 At a meeting with Israeli Prime Minister Benjamin Netanyahu on the sidelines of the World Economic Forum in Davos, Switzerland on January 25, US President Donald J. Trump suggested that he would withhold more aid from the Palestinians and that Israel “will pay” for his decision to agree upfront to recognize Jerusalem as its capital.

The Trump administration has already withheld $65 million in funding for the United Nations Relief and Works Agency (UNRWA), which helps Palestinian refugees.

What did Trump say? The president, according to a White House pool report, said that the United States could withhold even more money from the Palestinians if they do not negotiate peace with Israel.

Trump was particularly displeased by Palestinian Authority President Mahmoud Abbas’ decision not to meet US Vice President Mike Pence on his visit to Israel this month.

According to a Reuters report, Trump said of the Palestinians: “When they disrespected us a week ago by not allowing our great vice president to see them, and we give them hundreds of millions of dollars in aid and support, tremendous numbers, numbers that nobody understands— that money is on the table and that money is not going to them unless they sit down and negotiate peace.”

Why are the Palestinians peeved? The Palestinians, along with most other US allies in Europe and the Middle East, have been critical of Trump’s decision to recognize Jerusalem as the capital of Israel.

Our take: In interviews with the New Atlanticist, James B. Cunningham, a nonresident senior fellow at the Atlantic Council who served as the US ambassador to Israel from 2008 to 2011, called Trump’s recognition of Jerusalem a “pretty serious mistake.”

Earlier this week, Cunningham said the Trump administration’s decision to withhold aid from UNRWA in response to the Palestinians’ expected anger over the Jerusalem recognition could have security ramifications for Israel as well as the United States. UNRWA’s chief has said the decision risks more instability in the Middle East.

Cunningham on aid cut: “My assessment and the assessment of a lot of Israelis when I was there was that UNRWA was playing a useful role. There have always been criticisms about its performance, but the general assessment was that it contributed to stability by helping to manage the problem of Palestinian refugees, especially in Gaza.

“In Gaza, UNRWA plays a major role in helping support the Palestinian population in a non-political way by providing development support, education, and medical assistance. That role has usually been recognized by Israelis as well as American administrations and other members of the international community.

“But that view seems to have shifted now—at least when it comes to the US administration and some parts of Israeli opinion. I think over time it will be seen that helping to maintain stability in Gaza and the region is an important Israeli interest as well as in our interest.”

We asked: Was the decision to cut funding a mistake? Here’s what Cunningham said: “It seems to have been done more out a desire to express the administration’s displeasure with the Palestinians’ predictably harsh negative reaction to the embassy decision than as a thought-out part of a broader strategy. That is my general criticism of how the administration is going about these issues—both the recognition of Jerusalem and dealing with the Palestinians. What the administration is doing does not seem to be part of a broader strategy for how you would actually get through a difficult time in the region, promote Israel’s security in a more stable region, and get back to a situation where real discussions of peace with Israel might be a possibility.”

Dig deeper: Click here and here to read more of our interviews with Cunningham.