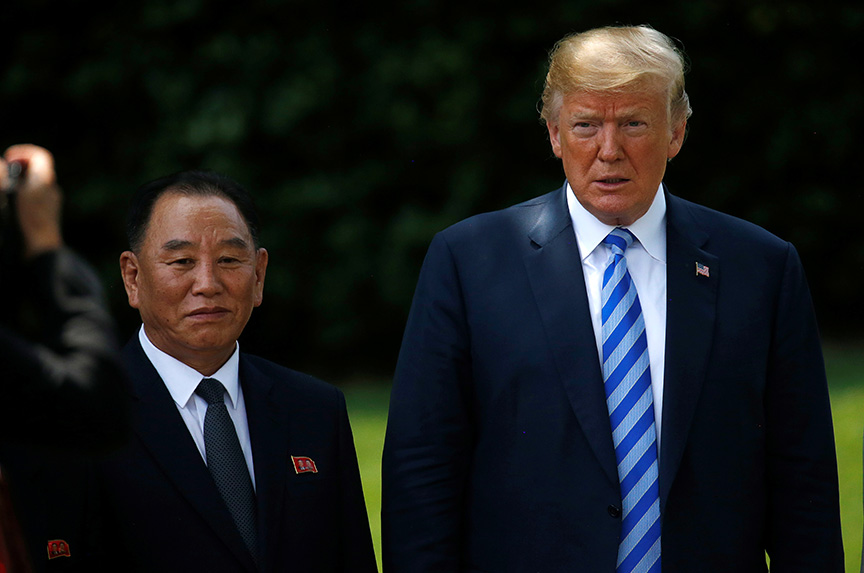 US President Donald J. Trump said on June 1 that his summit with North Korean leader Kim Jong-un will proceed as initially planned in Singapore on June 12.

On May 24, in a surprise turn of events, Trump had sent Kim Jong-un a letter of his own informing the North Korean leader of his decision to cancel the highly-anticipated summit. Trump cited what he said were hostile North Korean statements. But he also left open the door for a future summit and the North Koreans have been eager to seize the opportunity.

Kim is leading the North Korean effort to pave the way for the June 12 summit. On May 30, he traveled to New York where he met US Secretary of State Mike Pompeo.

“It will take bold leadership from Chairman Kim Jong-un if we are able to seize this once-in-a-lifetime opportunity to change the course for the world,” Pompeo said after the meeting on May 31. “President Trump and I believe Chairman Kim is the kind of leader who can make those kinds of decisions. And that in the coming weeks and months, we will have the opportunity to test whether or not this is the case.”

Kim is the highest-ranking North Korean official to visit the United States, but he required special dispensation to travel.

In 2010, the Obama administration sanctioned North Korean officials and entities for supporting the Asian nation’s  weapons of mass destruction program. Kim was among the officials targeted. Kim was given a special waiver to travel to the United States.

In February, South Korea gave him a similar waiver to allow him to travel to Pyeongchang to attend the closing ceremony of the Winter Olympics.

Kim faces South Korean sanctions as he is suspected of having a hand in the bombardment of Yeonpyeong, a South Korean island, on November 23, 2010, and the sinking of a South Korean destroyer on March 26, 2010. Forty-six South Korean sailors were killed after the Cheonan was struck by a North Korean torpedo while in the Yellow Sea.

Here’s what Atlantic Council analysts have to say about the upcoming Trump-Kim summit.

Alexander “Sandy” Vershbow, distinguished fellow in the Atlantic Council’s Scowcroft Center for Strategy and Security. He served as US ambassador to South Korea from 2005 to 2008.

“I’m glad President Trump realizes that it may not be easy to get North Korea to make a genuine commitment to denuclearization. He has talked about how we may need more than just one meeting to get there. It is not clear that there is as yet common ground between the United States and North Korea on denuclearization.

“Kim Jong-un may be ready to make the strategic shift that Secretary of State Mike Pompeo talked about, but it’s not clear that he has made that shift as yet. The North Koreans may feel that they are negotiating from a position of strength.”

“If June 12 is now back on, we need to use every day until the summit to pin the North Koreans down on an unambiguous commitment to denuclearization, with verification, and to ensure that they do not attach any unacceptable conditions that would undermine the US-ROK  defense alliance.  Without clarity on these points, the Singapore meeting could end in failure.”

Barry Pavel, senior vice president, Arnold Kanter chair, and director of the Scowcroft Center for Strategy and Security at the Atlantic Council.

“Confounding most North Korea analysts, the summit is back on.  Those who follow President Trump’s decision-making approach were less surprised.

“Both leaders want the meeting to happen, as does President Moon of South Korea and much of the international community.

“Now, the real work begins.  The key issue is what comes out of the meeting, or series of meetings, as President Trump suggested today.  It’s absolutely essential that the parties clarify the scope and timelines for denuclearization; the longer that gets delayed, the less leverage the US and South Korea may retain.  This is so for the simple reason that North-South engagement activities are well underway, which increases the difficulty of sustaining stringent economic sanctions.

“If key countries (especially China) ease up on sanctions, the only remaining leverage for the US and South Korea is the threat of military action.

“Thus, beyond the ‘get-to-know-you’ meeting that President Trump suggested today, the key outcome should be a definition of denuclearization and an agreed, rapid timeline for dismantling North Korea’s nuclear weapons and associated delivery systems.”

“If the United States is willing to drop its expectation that the North Koreans will give up their nuclear weapons, the June 12 summit can certainly take place. The very fact of the meeting will be an enormous win for the North Koreans. In one stroke, they will have gained international legitimacy, undermined international sanctions, and potentially placed a wedge between the United States and Japan.

“The United States, on the other hand, will have certainly realized President Trump’s lustful desire for a major media event and even cooled tensions in the Korean Peninsula but will have done nothing to eliminate the North Korean nuclear threat.

“If Donald Trump is willing to recognize that negotiating the same deal as have passed US presidents with the North Koreans, the path forward is clear. In their dream scenario, the Trump administration might hope to negotiate a deal with the North Koreans half as good as the agreement with Iran they just threw out the window.”

Ashish Kumar Sen is deputy director of communications, editorial, at the Atlantic Council.  Follow him on Twitter @AshishSen.