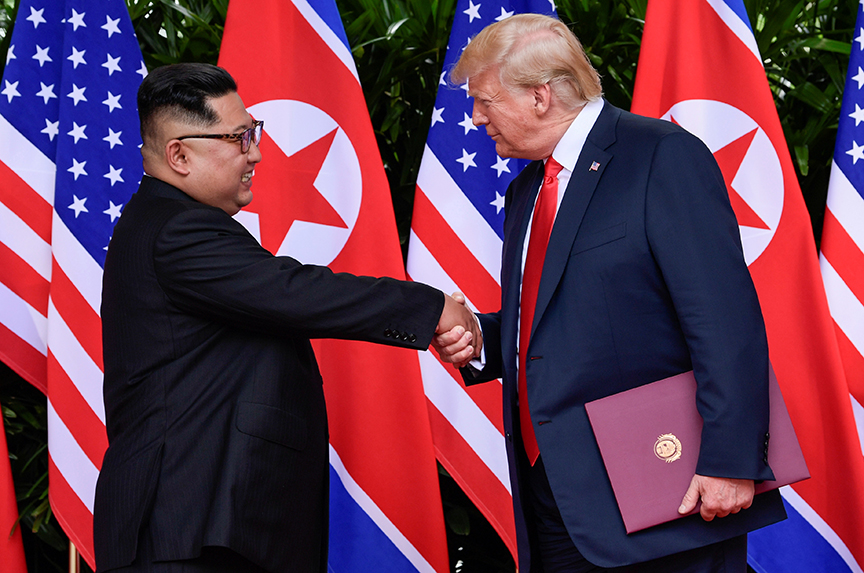 Interview with Alexander Vershbow, an Atlantic Council distinguished fellow and former US ambassador to South Korea

The recent setbacks to US efforts to get North Korea to give up its nuclear weapons hold a lesson for US President Donald J. Trump’s administration: “It is a reminder that we need to engage with Kim Jong-un with our eyes open, and not put so much faith in the value of good personal relations,” according to Alexander Vershbow, a distinguished fellow at the Atlantic Council’s Scowcroft Center for Strategy and Security.

Trump and Kim participated in a summit in Singapore on June 12. Trump has since lavished praise on the North Korean dictator, describing him as “a very worthy, smart negotiator.”  In his August 24 tweets in which he announced his decision to cancel US Secretary of State Michael Pompeo’s visit to Pyongyang because he felt the North Koreans have not made enough progress on denuclearization, Trump made sure to send his “warmest regards and respect” to Kim.

The Trump administration “should use the current time-out in diplomacy to come up with a more comprehensive strategy—building on the Singapore framework—that can put Kim Jong-un to the test and, hopefully, get the negotiations back on track,” said Vershbow who served as the US ambassador to South Korea from 2005-2008.

Alexander Vershbow discussed developments in an e-mail interview with the New Atlanticist’s Ashish Kumar Sen. Here are excerpts from that interview.

Q: Is the Singapore Summit now exposed as a failure? What lessons can the Trump administration learn from this experience dealing with North Korea?

Vershbow: The Singapore Summit was not a failure, but it is now clear to everyone—including President Trump—that the administration oversold the results.  The cancellation of Secretary of State [Michael] Pompeo’s trip to Pyongyang confirms what most experts saw at the time of the summit in June:  that the president did not obtain a clear commitment to denuclearization from Kim Jong-un; that the North Korean nuclear threat to the United States, South Korea, and Japan remains unchanged; and that the North Koreans are expecting substantial concessions from the United States in return for steps toward denuclearization.  It is a reminder that we need to engage with Kim Jong-un with our eyes open, and not put so much faith in the value of good personal relations.

Q: Is the United States back on the path to confrontation with North Korea?

Vershbow: The breakdown in talks does not mean we are back on the path of confrontation with North Korea —at least not yet.  The Singapore Joint Statement, while not a breakthrough and lacking in many important details, can still serve as the foundation for further negotiations if the administration gets its act together; strengthens coordination with South Korea, China and other stakeholders; and puts Kim Jong-un to the test in a way that we failed to do in Singapore.  We need to make sure that the other players keep the pressure on Pyongyang and show Kim that he cannot play us off against one another.

The appointment of Steve Biegun as special representative for North Korea negotiations is an opportunity to design a more comprehensive and coordinated strategy, one that combines carrots and sticks with the goal of achieving rapid, verifiable denuclearization together with a peace treaty, security guarantees, and normalization of relations with North Korea.

Q: What are the main sticking points between the United States and North Korea?

To get the process back on track, the United States needs to accept that Singapore was a package deal, that any progress toward denuclearization will inevitably be a step-by-step process, and that progress will require adhering to the principle of “action-for-action” that has worked in the past.  We should be forthcoming on an end-of-war declaration, making clear that it is a political confidence-building measure and does not take the place of a peace treaty, which can only be concluded when the main threat to peace on the Korean peninsula, the DPRK’s nuclear weapons capabilities, has been eliminated.

In return, we should insist that the North Koreans provide a declaration of what they have in terms of their inventory of nuclear weapons, delivery systems, and production facilities, with real international verification.  This is the logical first step in any denuclearization plan, and will be essential to guaranteeing the eventual dismantlement of the DPRK’s warheads, missiles, and nuclear weapons infrastructure.

With a verifiable inventory of the North’s nuclear capabilities, we can begin a staged process of deactivation, dismantlement, and destruction of the North’s nuclear programs over, say, a two-to-three-year period, with negotiations on a peace treaty, security guarantees and other military confidence-building measures moving ahead in parallel.  Sanctions relief and economic assistance would be provided incrementally at each milestone in the denuclearization process, consistent with the action-for-action principle. Economic incentives would be withheld or rolled back if the North reneged on its commitment to complete denuclearization

The window of opportunity for a comprehensive solution will not remain open indefinitely.  It’s still an open question whether Kim Jong-un will ever give up his nuclear weapons and programs, or whether he is trying to get what he wants—a peace treaty, security guarantees, and normalization of relations with the United States —without giving up his nukes.  Many experts believe he wants to be accepted as a nuclear power, which would turn the whole exercise on its head.

The administration should use the current time-out in diplomacy to come up with a more comprehensive strategy—building on the Singapore framework—that can put Kim Jong-un to the test and, hopefully, get the negotiations back on track.

Alexander Vershbow, is a distinguished fellow at the Atlantic Council’s Scowcroft Center for Strategy and Security. Follow him on Twitter @ARVershbow.

Image: US President Donald J. Trump (right) and North Korean leader Kim Jong-un shook hands after signing an agreement at the end of their summit in Singapore on June 12. (Susan Walsh/Pool via Reuters)