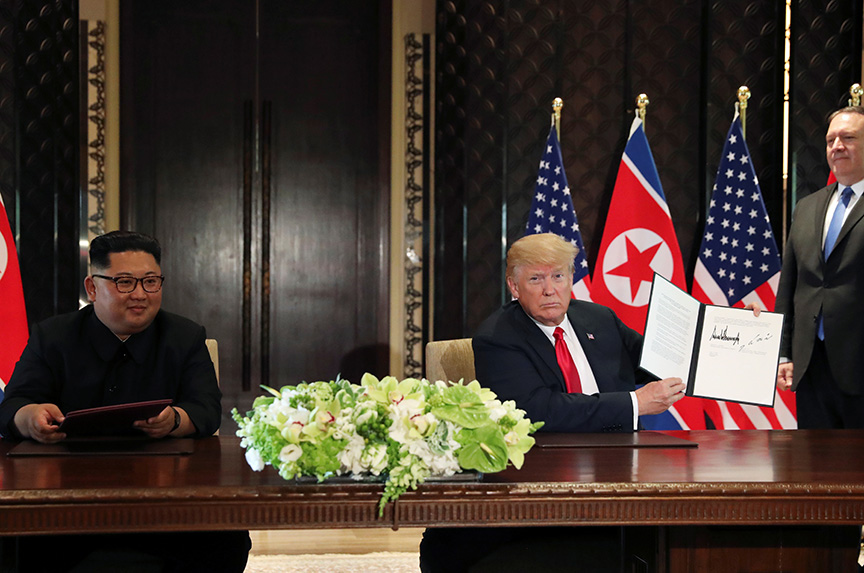 In terms of personal rapport between US President Donald J. Trump and North Korean leader Kim Jong-un, the Singapore summit on June 12 looks like a success, but on the substantive issues—not so much.

As the United States’ ambassador to South Korea from 2005 to 2008, I witnessed first-hand the tense military standoff at the demilitarized zone (DMZ).  So I cannot help but be hopeful that this could be the beginning of a fundamental change for the better in US relations with North Korea and the first step toward peace on the peninsula.

But peace is not going to be possible if the main threat to peace—in the region and beyond— is not eliminated in a verifiable and irreversible way.

Despite frantic negotiations among experts in the days leading up to the summit, the Trump-Kim joint statement is actually weaker and vaguer than similar documents that were agreed during previous US administrations. The North Koreans were tough negotiators, as in the past, and gave nothing away.

The joint statement did not produce any concrete progress toward denuclearization.  It merely reaffirmed previous North Korean commitments in general terms.  In fact, there is nothing on the scope of denuclearization (will it cover not just warheads and missiles, but fissile material production and other infrastructure?); there is no commitment on the timetable or verification; there is no mention of North Korea rejoining the nuclear Non-Proliferation Treaty (NPT) and accepting International Atomic Energy Agency (IAEA) safeguards.

And it is not clear what the North Koreans will demand in return beyond security guarantees and normalization of relations.

Trump’s announcement of a suspension of US-South Korea military exercises, together with indications of a readiness to reduce or withdraw US troops deployed in South Korea, is a major concession to North Korea without obtaining anything significant in return.

The promised destruction of an ICBM [intercontinental ballistic missile] engine test stand (not mentioned in the joint statement) is a minor gesture, since the North Koreans have already tested an ICBM successfully several times.  It does not get at the real requirement of dismantling North Korea’s weapons and missiles that threaten the United States, South Korea, and Japan.

Military exercises are vital to deterrence. They ensure that US and allied troops are at a high level of readiness and interoperability.  Since US units usually are deployed on one-year rotations, there must be a regular rhythm of exercises every year to ensure that we and our South Korean allies are able to “fight tonight” in the event of North Korean aggression.

In sum, Kim Jong-un gave up nothing on his nuclear programs, yet received the boost in stature and legitimacy that comes from a meeting with the president of the United States.  De facto, he gained recognition of North Korea as a nuclear weapons state.  In propaganda terms, he came out ahead when you look past the soaring rhetoric and warm atmosphere during the summit.

Fortunately, the United States did not ease the pressure of sanctions, and made clear that sanctions relief can only come with concrete steps toward denuclearization.  So we have not given up our most important leverage as the action shifts to follow-on talks led by US Secretary of State Mike Pompeo.

It will be important for the United States to reaffirm that no peace regime or normalization of relations is possible without denuclearization.

We should continue to press for a “front-loaded” timetable for denuclearization, with early steps by North Korea to dismantle some of its nuclear capabilities as a demonstration that we are not seeing the same movie once again.

Although Trump’s amazing video showed the benefits for North Korea if it makes a strategic choice to abandon nuclear weapons in favor of economic prosperity, we still have no evidence Kim Jong-un has made that choice—or that he is really considering it.

We need to keep the pressure on, continue to work closely with our South Korean allies and with Japan, to achieve an outcome that really opens the way to a brighter future for the United States, its allies, and all the people on the Korean Peninsula.

Alexander “Sandy” Vershbow is a distinguished fellow in the Atlantic Council’s Scowcroft Center for Strategy and Security. He served as US ambassador to South Korea from 2005 to 2008. Follow him on Twitter @ARVershbow.

Image: US President Donald J. Trump showed the document that he and North Korean leader Kim Jong-un signed acknowledging the progress of the talks and pledge to keep momentum going, after their summit at the Capella Hotel on Sentosa island in Singapore on June 12. US Secretary of State Mike Pompeo is on the right. (Reuters/Jonathan Ernst)