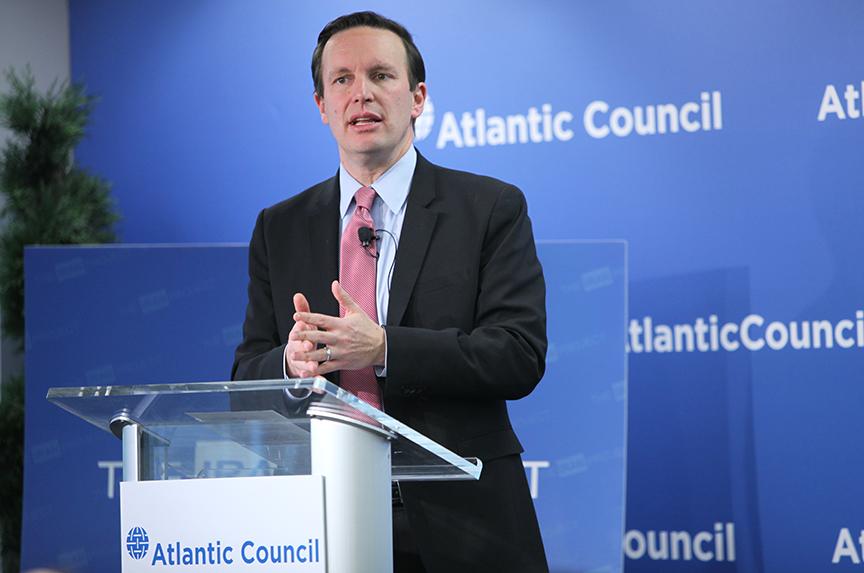 Sen. Chris Murphy (D-CT) sees order as a ‘gift’ to hardliners in Iran

US President Donald Trump’s executive order that curtails immigration and the rights of refugees is illegal, has “catastrophic implications” for the United States, and is a “gift” to hardliners in Iran as it paints all Iranians as a security threat to the United States, Sen. Chris Murphy (D-CT) said at the Atlantic Council in Washington on January 30.

“This ban on immigration from Iran to the United States is a gift to the hardliners at a moment in which we should not be giving them gifts,” said Murphy, noting that it comes at a particularly delicate time for the moderates in Iran soon after the death of former President Akbar Hashemi Rafsanjani on January 8. “This is a movement that does not need another body blow, and yet they got it,” said Murphy.

“If your goal in the end is to make sure that the radicals and the hardliners—those that do regularly profess the death of Israel, who do want to pursue a policy of wreaking havoc in the Middle East, who wouldn’t be afraid of war with the United States, if you believe that we should pursue a policy that doesn’t effectuate that end, then the decision to hand them a victory, a recruitment tool is maybe the dumbest part of this executive order, and that’s saying a lot,” Murphy said in remarks at an event—“Iran Symposium: Does the Iran Nuclear Deal Help or Harm US Interests in the Middle East?”—hosted by the Atlantic Council’s Future of Iran Initiative.

The executive order, Murphy said, has “catastrophic implications for the [United States]. I think we are shrinking in the world’s eyes every single day.”

Responding to the widespread protests unleashed in response to Trump’s actions, Murphy said peaceful dissent could be effective in pushing Republicans “who in their gut and in their head know what’s right and know what’s wrong, [but] for political reasons they have chosen not to verbalize it.”

However, such dissent has had the opposite effect on the White House, he added.

Prominent Republican lawmakers, including Sen. John McCain (R-AZ) and Sen. Lindsey Graham (R-SC), have criticized Trump’s immigration order. Murphy said he would introduce legislation in the Senate on January 30 that would cut off funds required for the implementation of the order. Sen. Dianne Feinstein (D-CA) is also planning legislation against the order. Murphy noted, however, that the courts remain the better recourse because of the unlikelihood of Trump signing any congressional measure that seeks to block his order.

Meanwhile, Senate Democrats are exploring their Republicans colleagues’ willingness to join efforts against the president’s action. Republicans are unwilling to join on this issue because they have “more important irons in the fire right now,” including budget reconciliation, repealing the Affordable Care Act, and tax cuts, said Murphy. “They don’t want to lose [Trump’s] support for their economic agenda and their health care repeal agenda, and so they’re trying to stay close to him right now,” he added.

As a presidential candidate, Trump had repeatedly proposed a Muslim ban. While his executive order targets Muslim-majority countries, the president has pushed back against the characterization of it in the media as a Muslim ban.

Murphy was not surprised by Trump’s actions in his first ten days in office which have sparked massive nationwide protests. “President Trump is doing everything he said he was going to do on the campaign trail,” said the senator.

While many voters were convinced that Trump did not mean what he said as a candidate, a belief that was later reinforced by cabinet picks who directly contradicted some of the president’s policy positions, “on policy after policy in the first ten days it is pretty clear that he meant everything that he said,” said Murphy, citing the Muslim ban.

Murphy, who insisted that he will not be voting to confirm Rex Tillerson for the job of secretary of state, noted that in confirming Defense Secretary James Mattis and Homeland Security Secretary John F. Kelly, members of Congress had given them the benefit of the doubt because they had opposed Trump’s Muslim ban at their confirmation hearings.

“Clearly they didn’t have any impact on Trump’s decision to impose this reckless, harmful, dangerous ban,” the senator noted, adding, “to the extent that nominees are trying to push their candidacies by telling Democrats that they are going to stand up to President Trump, that should have a lot less purchase than it did before Friday,” when the president signed his executive order.

“We were told that Mattis and Kelly would tell the president how dangerous it would be to prevent Muslims from entering the United States. Either they lost that case, or didn’t make it, or were never consulted… That makes me less willing to support a nominee simply because I think that nominee is going to be a sane, reasonable voice inside the administration,” he added.

On the campaign trail, Trump had pledged to rip up the Iran nuclear agreement, which he called a very bad deal. Given the experience of Trump’s first ten days in office, Murphy cautioned: “We have to start from a defensive posture” on the Iran deal. This would mean reminding lawmakers—Democrats as well as Republicans—that “all of the Armageddon predictions that were made about the Iran nuclear deal have simply not come true.”

In January of 2016, the United States, the European Union, and the United Nations lifted nuclear-related sanctions on Iran after the International Atomic Energy Agency (IAEA) certified that Iran was in compliance with the terms of the nuclear deal. The agreement limits Iran’s enrichment program for fifteen years. Restrictions placed on research and development will be eased in about ten years. However, some restrictions will remain for up to twenty-five years.

Critics of the deal have since adopted a more favorable opinion of it and do not want Trump to rip it up.

However, the hardliners in Iran see in Trump’s rhetoric an opportunity to force the US president to unwind the deal and “have the failure of the deal be on America’s hands,” said Murphy. “They now have a new opportunity—a reckless, unplanned, unstrategic American administration who might fall for a tactic run by the hardliners forcing the international community to blame the United States, not Iran, for this deal being scuttled,” he added.

While Iran’s ballistic missile test, including one reported on January 30, and its support for Syrian President Bashar al-Assad warrant a discussion about sanctions, “it should be a careful conversation,” said the senator.

The Iranian government has touted the nuclear deal it reached in 2015 with the five permanent members of the United Nations Security Council—United States, the United Kingdom, Russia, China, and France—and Germany as an opportunity for the Islamic Republic to re-engage with the international community. The executive order on immigration, however, scuttles that argument by “labelling not the Iranian regime, but the Iranian people as enemies of the United States,” said Murphy.

While sanctions primarily target regimes, an immigration ban is “fundamentally different,” said Murphy, in that it is “leveled directly at the people of that country under the assumption that everyone in that country is a threat to the United States.”

“Despite all of the terrible stuff that the Iranian regime has done to fund and sponsor terrorist and radical organizations in the Middle East, there is no evidence that the Iranian people pose a security threat to the United States,” he added.

Image: Responding to the widespread protests unleashed in response to US President Donald Trump’s policy positions, Sen. Chris Murphy (D-CT) said peaceful dissent could be effective in pushing Republicans “who in their gut and in their head know what’s right and know what’s wrong, [but] for political reasons they have chosen not to verbalize it.” (Atlantic Council/Victoria Langton)