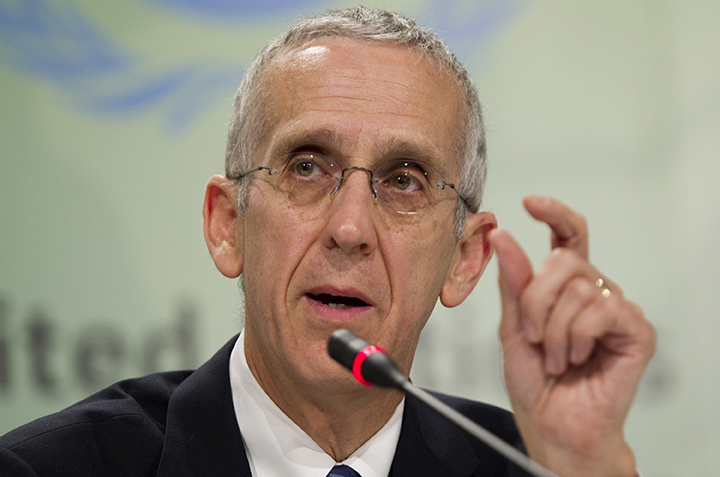 While there is “quite a bit of concern” about the direction of US President-elect Donald Trump’s energy policy, he is unlikely to take the United States out of the Paris climate change agreement for the simple reason that doing so would cause “huge collateral damage” to the United States, Todd Stern, a former US State Department special envoy for climate change, said in Abu Dhabi on January 13.

On the campaign trail, Trump said that he would pull the United States out of the climate accord reached in the French capital in December of 2015, but after winning the election on November 8 he told the New York Times that he is looking at the agreement “very closely” and has “an open mind to it.”

At his confirmation hearing before the Senate Foreign Relations Committee in Washington on January 11, Rex Tillerson, Trump’s pick for the job of secretary of state and a former chief executive officer of energy giant ExxonMobil, took a more forceful position saying it is important that the United States have a “seat at the table” to address the issue of climate change.

The Paris accord, ratified by US President Barack Obama in 2015, commits 180 countries, including the United States and China, to meeting specific emissions-reduction targets. Article 28 of the accord states that any country that wants to pull out after signing on has to wait four years.

Pointing to Trump’s campaign rhetoric and selection of climate skeptics to hold key positions in his administration—including heads of the Environment Protection Agency and the departments of Energy and the Interior, Stern said these early signs are worrying.

Stern, who served in the Obama administration is currently a visiting lecturer at Yale Law School, said while Trump cannot formally pull the United States out of the Paris agreement [though it has been reported that the incoming administration is looking at ways to bypass the four-year rule] he could withdraw from the underlying treaty, the United Nations Framework Convention on Climate Change. That, Stern warned, would be a radical move.

However, Stern said it is unlikely that at the end of the day Trump will walk away from the deal. “It would be huge collateral damage with respect to all of the other United States’ foreign policy equities,” he explained. “It would be a huge headache for Mr. Tillerson.”

Stern participated in a panel discussion on the second day of the Atlantic Council’s inaugural Global Energy Forum in the United Arab Emirates. He was joined in a discussion on “Post-Elections US Climate and Energy Policies” by Mohammad Sanusi Barkindo, secretary general of the Organization of the Petroleum Exporting Countries (OPEC); Paula Dobriansky, a senior fellow in the Future of Diplomacy Project at Harvard University’s John F. Kennedy Belfer Center for Science and International Affairs; Dominique Ristori, director general for energy at the European Commission; David Goldwyn, chairman of the Atlantic Council’s Global Energy Center Advisory Group; and Carlos Pascual, formerly the top energy official at the State Department who is currently a senior vice president at IHS Global Energy. Maya Raydan of Sky News Arabia moderated the discussion.

Under Trump, Stern predicted a serious downgrade in the level of the US commitment to addressing the threat of climate change. “I don’t think we will see the US sweating too hard to try to meet the targets that we put forward for 2020-2025,” he said, adding that this could have a negative impact on the Paris agreement.

On domestic energy policy, Stern said US President Barack Obama’s Clean Power Plan, which is facing a challenge in the courts, could be in jeopardy in a Trump administration. Undoing it will be a big undertaking, but the incoming administration is “invested enough in unwinding it, and that’s a real risk,” he said.

Negative action from Washington would result in cities and states—California, for example—taking on a more active role in setting energy standards, Stern said, adding that there will also be a lot more corporate action. Nevertheless, he said: “None of this is going to make up for… if, in fact, the new administration pulls back to the degree that I think that they will.”

Pascual noted “four ironies” of Trump’s energy policy pronouncements—first, the president-elect wants to remove regulations that affect the production of oil and gas in the United States, but the global market and not steps taken by the United States will impact production; second, Trump wants to remove regulations related to emissions, but doing so would have a negligible impact on US emissions; third, Trump has said he will pull the United States out of the Paris accord, but is unlikely to do so; and fourth, Trump has indicated a preference for a weaker federal structure on energy and environmental policy deferring more action to states, but on some issues this would result in tougher national standards.

Dobriansky noted that there is a “review process” whenever a new administration takes office to see which policies have worked and which have not. When it comes to energy and the environment, Trump, she noted, has placed a premium on creating jobs, bolstering the economy, conservation, and water.

“If you look at the Paris agreement, there are a number of core elements that I think provide a kind of foundation and compatibility with, in fact, many of the statements that have been made during the campaign,” Dobriansky said.

“In particular, it is a bottom-up approach to the particular way of dealing with climate change and places emphasis on national plans,” she said. A Trump administration would have a strong desire not to use executive orders with regard to environmental issues, but rather to engage Congress in the decisionmaking, she added.

Image: Former US State Department special envoy for climate change, Todd Stern, seen here in this 2011 file photo, said at the Atlantic Council’s Global Energy Forum in Abu Dhabi, United Arab Emirates, on January 13 that US President Donald Trump’s statements on climate and energy have caused “quite a bit of concern.” (Reuters)