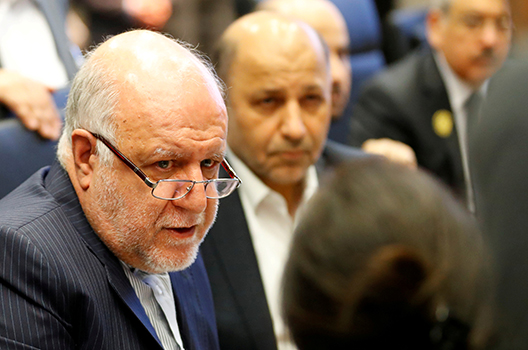 The Trump administration shocked global oil markets on April 22 with US Secretary of State Michael Pompeo’s surprise announcement that the United States would not renew any waivers for importing Iranian oil when they expire on May 2. While Pompeo noted that Saudi Arabia and the United Arab Emirates (UAE) would increase production to match the approximate 1.1 million barrels per day (bpd) of Iranian crude that will come off the market, this will cut into global spare capacity and has already pushed Brent crude up over 3 percent over $74 as of publication.

This is the second time the Trump administration has been forced to choose between two competing goals: bringing Iranian oil exports down to “zero” and keeping oil prices low. Taking the opposite tack from when the first round of waivers came up in November, this time the administration chose the former option, an apparent victory for Iran hawks in the Cabinet and on the Hill. In November, despite signaling since it left the Joint Comprehensive Plan of Action (JCPOA) in May that it was pushing for zero Iranian oil exports, the administration granted Significant Reductions Exemptions (SREs or “waivers”) to eight countries importing Iranian oil, leaving approximately 1-1.3 million bpd of Iranian crude on the market, in an effort to manage oil prices. This was roughly the same number of barrels left on the market—if not more than—under Obama administration sanctions.

The announcement on April 22 follows nearly two months of upward pressure on oil prices, with Brent crossing the $70 threshold on April 5 and flirting with $72 through April 19, its highest prices since November. This trend, which was largely driven by the OPEC+ cuts; instability in Venezuela, Libya, and Algeria; and robust demand drove the view held by many analysts that the administration would follow a similar playbook as in November and renew at least some of the waivers, given US President Donald J. Trump’s apparent price threshold goal of about $65 a barrel.

The administration’s recent public statements that it aims to get “Iran to zero just as quickly as [they] possibly can” were interpreted as a more gradual effort to cut Iranian crude, perhaps going to zero in the fall after Permian pipeline issues were resolved and gasoline prices fell after the summer peak. While only five countries are still importing Iranian oil—China, India, Japan, South Korea, and Turkey—China, India, and Turkey heavily depend on Iranian crude and were seen as “tough cases” by the administration. One source suggested to Reuters that the administration planned to renew waivers with a 20 percent cut, roughly at Iran’s current April export level, keeping Iranian barrels on the market and probably leaving prices unaffected.

Saudi Arabia’s and the UAE’s oil market support follows months of skepticism and frustration in the Organization of the Petroleum Exporting Countries (OPEC) with the administration over the November decision to grant waivers, which the administration took without notifying even its allies in OPEC. The group had canceled its planned April review meeting as part of a wait-and-see attitude toward waivers and production increases. Just last week, UAE Energy Minister Suhail Al-Mazroui noted in response to questions about increasing supply in advance of the May 2 deadline, “I think we have learned the lesson. We will do what is required to balance the market. We are not going to jump the gun, pre-produce the volumes that are not required yet.”

Earlier last year, Saudi Arabia and the UAE had supported the Trump administration’s efforts to punish Iran by re-imposing oil sanctions. At the June 2018 OPEC/non-OPEC meeting, when the market was starting to price in the potentially lost Iranian barrels, they led the push to add 600,000 to 800,000 bpd to the market, 500,000 of which came from Saudi Arabia alone.

To combat continued rising prices over the summer and fall, in addition to producing at record levels, Saudi Arabia publicly insisted, despite analysts’ fears, that it had enough spare capacity to meet falling Iranian exports, and the UAE announced it was developing nearly 300,000 bpd additional production capacity by the end of the year. There was also significant effort to resolve the dispute between Saudi Arabia and Kuwait over two oil fields in the Saudi-Kuwaiti Neutral Zone that have been offline for over three years, which would have added up to 500,000 bpd to the market.

Given the apparent alignment between Saudi Arabia, the UAE, and the United States, OPEC members—and particularly Saudi Arabia and the UAE—were taken by surprise by the administration’s November decision and angered by the lack of communication and mis-signaling of US intentions. The waivers decisions precipitated a dramatic fall in prices, which, combined with global economic headwinds and continued strong growth in US production, bottomed out at a low of just above $50 per barrel in December.

The United States had achieved one of its goals—bringing oil prices down—but only partially achieved its goal of inflicting “maximum pressure” on Iran. This limited achievement on oil price was relatively short-lived, however. Over the objections of a Trump tweet, at the December OPEC/non-OPEC meeting, the group agreed to cut production by 1.2 million bpd, the full implementation of which was starting to bite over the past few months.

Ironically, in November, the United States could have removed many more Iranian barrels from the market (though zero was likely impossible) while still maintaining a relatively low oil price, though not as low as it ultimately fell. US and OPEC+ production increases over the second half of last year combined were significantly more than the number of Iranian barrels taken off the market. So, as it turns out, the United States had more room to impose sanctions.

A more measured and transparent approach could have achieved this goal. Similarly, a steadier price signal over the past six months instead of the vacillations driven by US policy and OPEC response probably would have prevented some of the current slowdown in US shale, making the ultimate push to zero less painful. Now, the Trump administration will need to rely on an angry OPEC+ to solve the price problem. Some reports have suggested Russia would like to increase production, but if the OPEC meeting last June is a guide, getting consensus will be difficult.

That Trump previewed this decision with Saudi and Emirati leadership last week indicates a more thoughtful approach this time around, but a vague statement from Saudi Arabia on April 22 that it will “coordinate with fellow oil producers to ensure adequate supplies… in the next few weeks” intimates they may take advantage of the higher prices in the near term. Additionally, Iranian threats to close the Straits of Hormuz suggest oil price pain will get worse before it gets better.

It did not need to be this way. But the administration’s inconsistent approach has made it that much harder for Trump to have his cake and eat it too.

Randolph Bell is the director of the Atlantic Council’s Global Energy Center.