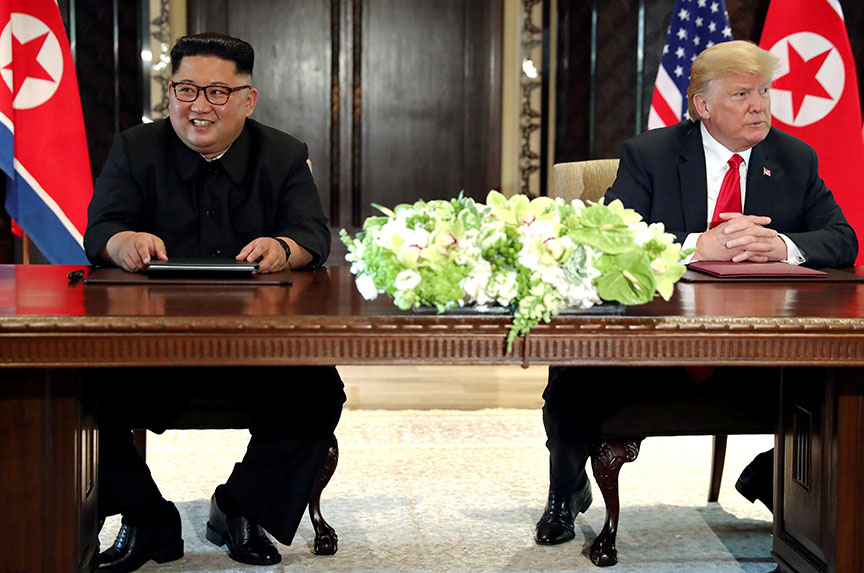 Few observers believe that the agreement signed between US President Donald J. Trump and North Korean leader Kim Jong-un in Singapore on June 12 will result in North Korea actually giving up its nuclear weapons. But, oddly, some observers—not just the administration’s boosters—have praised the agreement anyway because they argue it makes peace more likely. The opposite is true: Trump and Kim’s rash and meaningless gesture has now made war more likely.

The agreement is mostly filled with platitudes and boilerplate. (“The United States and the DPRK commit to establish new US-DPRK relations in accordance with the desire of the peoples of the two countries for peace and prosperity.”) The line that came closest to being meaningful stated, “the DPRK commits to work toward complete denuclearization of the Korean Peninsula.”

The agreement contained no details on implementation, no enforcement mechanisms, and no process for verification—ironically, the same weaknesses that Trump discerned in the much-more detailed Iran nuclear deal. Worse, the North Korean agreement did not use the formula US diplomats have long insisted on: “complete, verifiable, irreversible dismantlement.”

That is why few observers take the agreement seriously as an arms-control measure. Unsurprisingly, US intelligence has already detected moves by North Korea to conceal its weapons stockpile, obscure how many weapons it has, and hide certain nuclear facilities. Anyone familiar with the history of nonproliferation efforts on the peninsula will be as shocked as Captain Renault discovering gambling in Rick’s casino.

Nonetheless, some critics have praised the deal. Bill Scher made a plea to give diplomacy a chance in Politico. Nicholas Kristoff shamed Democrats for criticizing Trump’s peace overtures in the New York Times. Uri Friedman worked hard to find all the silver linings he could in The Atlantic, including that that United States and North Korea are “now talking to each other rather than threatening war.”

How might this happen? It could happen, for example, if Side A makes unrealistic and unenforceable promises to Side B. Side B works up unrealistic hopes on the basis of Side A’s promises; Side B is so disillusioned and angry once Side A fails to deliver that relations between the two end up worse off at the end than they were at the beginning—with the added danger that both sides believe they have given diplomacy a chance and proven it is worthless.

A variant on this scenario involves Sides A and B disagreeing on what exactly Side A promised because the promises were vague. The two sides argue bitterly about what implementation should require and end up fighting over the terms of the agreement that was supposed to guarantee peace.

It could also happen a different way: if Side A makes demands in the name of its security and Side B decides to accommodate such demands in the hopes that if Side A feels more secure, it will act more reasonably. But once Side A realizes it can blackmail Side B with threats of its own weakness, insecurity, and irrationality, it goes on manufacturing conditions that exacerbate perceptions of its weakness, insecurity, and irrationality.

These scenarios are not hard to imagine. The first scenario is what Trump is now trying. The last scenario is largely how the Reagan, Clinton, and George W. Bush administrations handled North Korea, with the result that North Korea successfully developed nuclear weapons and intercontinental ballistic missiles while weathering a major famine and stabilizing its regime through two power transitions. Their diplomacy helped embolden and strengthen North Korea and will make any future war more devastating by orders of magnitude.

And there is evidence that the Trump administration is trying its approach with the express intent of checking the diplomacy box en route to war. “If failure is inevitable, Mr. Pompeo wants it to come more quickly this time, so the administration can return to its maximum pressure campaign of sanctions and diplomatic isolation of North Korea, he has told advisers,” according to the New York Times, referring to US Secretary of State Mike Pompeo.

Pompeo may be right. Denuclearization is probably an unrealistic goal and the nuclear deal will probably fail. And then Pompeo can plausibly go back to his boss and argue that the administration needs to revert to the high-pressure tactics and coercive diplomacy of 2017, except without an off-ramp in the form of negotiations to avert the possibility of war.

Such a result would be unfortunate and premature. The coercive diplomacy of 2017 (minus the personal insults over Twitter) had some logic to it. The United States had been ramping up the pressure and communicating that North Korea would, at long last, pay a steep price for continuing its irresponsibility. That is, in principle, a defensible and potentially effective approach—but only as prelude to tough negotiations that lead to an enforceable settlement. Trump and his team got the first part mostly right and flubbed the payoff. Once the agreement falls apart, war may appear to both Trump and Kim as the most logical alternative.

Paul D. Miller is a professor in the practice of international affairs at Georgetown University’s School of Foreign Service, where is serves as the co-chair of the Global Politics and Security concentration. He is also a senior fellow in the Scowcroft Center for Strategy and Security at the Atlantic Council. He is the author of American Power and Liberal Order.

Image: US President Donald J. Trump (right) and North Korean leader Kim Jong-un hold a signing ceremony at the conclusion of their summit at the Capella Hotel on the resort island of Sentosa, Singapore, on June 12. (Reuters/Jonathan Ernst)