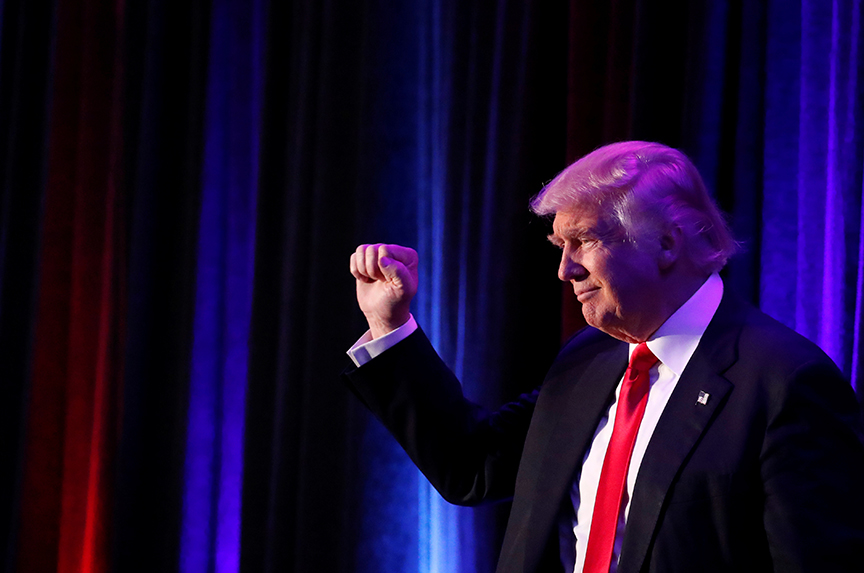 Atlantic Council Executive Vice President for Programs and Strategy, Damon Wilson, discussed the implications of Donald Trump’s election victory, and the opportunities and challenges that lie ahead.

Wilson spoke in an interview with the New Atlanticist’s Ashish Kumar Sen. Here are edited excerpts from our interview:

Wilson: This is Brexit gone global. It is quite a bit of a shock. It continues to be a wakeup call and yet we have seen this coming. We have seen the roiling votes, frankly, all across Europe. We are seeing the result of some type of popular backlash to the powers of globalization. We have watched it play out first in Europe, then in the Republican primary, and now Donald Trump has ridden it to victory in the presidential election.

We have to expect more to come. We are headed toward very significant elections, first in Austria, then the Netherlands, France, Germany. In each of these elections the same types of issues are at stake and a new crop of leaders is challenging the establishment and has the chance to seize power.

Q: What should President-elect Trump’s foreign policy priorities be in his first hundred days in office?

Wilson: I think President-elect Trump, even before he becomes president, has an opportunity if not responsibility to help stabilize the world, to help send the right signals to the world of the United States’ consistent engagement.

Things will change, no doubt. This president will have new policies and approaches and, frankly, it will take a while to figure out what they are. The role the United States plays is so catalytic. What we do or don’t do reverberates in almost every country in the world. There is an opportunity for the president-elect to try to calm the waters and send a message of America’s commitment to be a reliable international partner—although recognizing that there are big changes to come.

Wilson: The challenges are how to actually turn simplistic campaign themes into actual initiatives and presidential policies. That is both a challenge and an opportunity. This is a president-elect who questioned the nature of America’s role in the world. He adopted a famous isolationist slogan of America First. There is a need to begin setting out first principles in terms of how a Trump administration will lead the United States globally, with both our allies and our adversaries as an intended audience.

There is a real challenge and an opportunity to take campaign slogans on trade and to figure out what it really means to have a “better” trade deal and how do we not just erect walls, close our borders, and potentially fuel a recessionary reaction, but get to work on something that could be considered a better trade deal.

The same with our alliances. There has been some inflammatory rhetoric that called into question America’s commitment to our alliances. Our alliance structure, NATO in particular, is an incredible force multiplier of American interests. So how does Mr. Trump translate campaign themes of putting pressure on our allies to step up to the plate into a constructive strategy to make our alliance more effective and to stand by them, not to abandon them?

Q: As president, what should Trump do to strengthen the transatlantic relationship?

Wilson: There is going to be a need to reach out and make direct connections with leaders in Europe who are going to be concerned about who their partner is. This is a candidate who on the campaign trail directly criticized the chancellor of Germany, a country that will be his most important partner in Europe in getting things done. There needs to be an effort to extend a hand and to build those alliances. A sense of cooperation is going to be required.

Second, it is going to be important to build relationships face to face. Early outreach and early visits to Europe—an upcoming NATO summit, an upcoming G7 summit in Italy, and then a G20 summit in Germany and possibly a “Three Seas” summit with Central European leaders. There needs to be a calculated effort to use the arc of this engagement not to allow our adversaries to think that all of a sudden America’s closest allies are distancing themselves from us, but to begin to map out a path forward in working with our allies on challenges that are not going to go away.

Q: What are the prospects of a Russia reset in a Trump presidency?

Wilson: Russia is the wild card. I think this is potentially a trap. This is a candidate whose track record indicates he’s interested in deal making. Key is that any deals made with Russia advance American interests and values, and do not sacrifice our friends, allies, and partners in the process.

This is why Vladimir Putin is looking for a deal: He is eager to sit down and carve up the world into spheres of influence. We roll back sanctions while he simply consolidates the gains he’s made on the ground. He gets Ukraine, he gets Georgia and Moldova, and perhaps he even has some say over some of the former Warsaw Pact countries that are now our NATO allies. That is a kind of deal that rewards—and incentivizes—egregious behavior and one we can never consider.

Most American presidents think that they have the ability to reach out and work with the Russian leader at the beginning of their term. That’s understandable but Putin has learned to use this to his advantage. I think this is the real wild card where the president-elect needs to be careful. Until Mr. Putin sees things a bit differently, the terms of the deal that he is interested in, I fear, would put at risk our fundamental values, interests, and friends.

Damon Wilson is executive vice president for programs and strategy at the Atlantic Council. You can follow him on Twitter @DamonMacWilson.