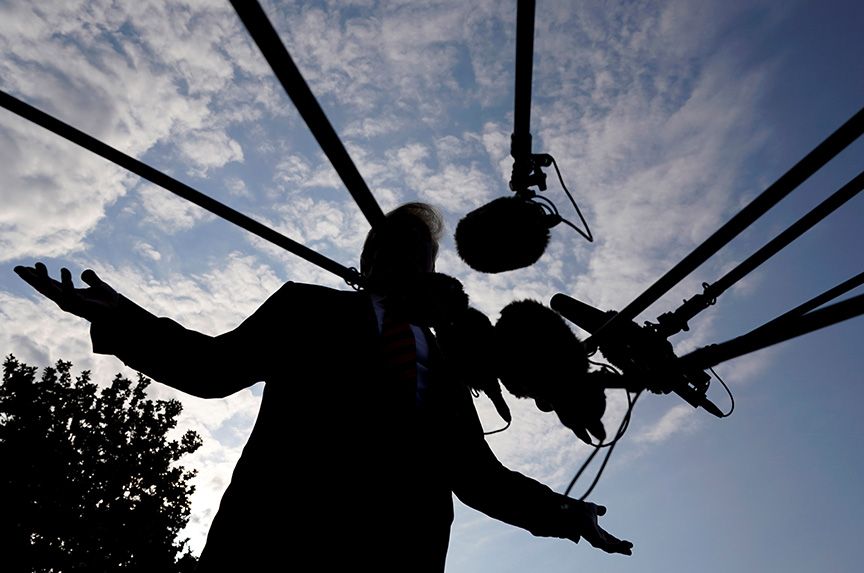 US President Donald J. Trump’s suggestion that Russia be invited back to a grouping of the world’s largest economies is likely to deepen divisions with allies already irked by the president’s policies.

Trump on June 8 called for Russia to be reinstated into the G7 from which it was expelled following its annexation of Crimea from Ukraine in 2014.

“Now, I love our country. I have been Russia’s worst nightmare,” Trump said. “But with that being said, Russia should be in this meeting. Why are we having a meeting without Russia being in the meeting?”

Trump spoke at the White House before departing for Charlevoix, Quebec, Canada, where the G7 is meeting on June 8 and 9. The G7 was previously known as the G8 before Russia was kicked out in 2014.

The G7 is made up of the United States, Canada, the United Kingdom, France, Germany, Japan, and Italy. The European Union (EU) is a non-enumerated member.

Even prior to Trump’s latest comments, the G7 summit was expected to be an awkward one for the United States. This is largely because the Trump administration has taken opposing views to many of its allies on issues such as the Iran nuclear deal, trade, and global warming. Trump has pulled the United States out of the Iran nuclear deal and the Paris climate accord, and his administration has slapped tariffs on steel and aluminum imports from the EU, Mexico, and Canada.

Atlantic Council analysts had this to say about Trump’s comments on Russia’s G7 membership:

Daniel Fried, distinguished senior fellow in the Atlantic Council’s Future Europe Initiative and Eurasia Center. In the course of his forty-year Foreign Service career, Fried played a key role in designing and implementing American policy in Europe after the fall of the Soviet Union.

“A wise foreign policy consists of rallying one’s friends to better manage one’s adversaries. But President Trump’s call for Vladimir Putin’s Russia to be admitted to the G7 conveys weakness toward an aggressor and contempt for those defending the free world. Combined with the president’s recent misplaced energy in attacking our friends (Canada and the European Union), President Trump has placed himself on the wrong side: with the autocrats, the corrupt, and the anti-Americans, who look to Vladimir Putin as a natural ally. Such language will dismay the United States’ friends and embolden our adversaries.

“The White House flirted early with unilaterally rescinding sanctions directed against Russia for its invasion of Ukraine, but backed away in the face of congressional and public pressure. Since then, the administration’s actual Russia policy has been better than some of the president’s rhetoric, and in some cases—sanctions, military support for NATO’s eastern flank—pretty good. But this latest comment puts the president at odds with his own administration, as well as at odds with the US allies, US values, and US interests in leading a rules-based, free world which has worked well for us and for the world.”

Alexander “Sandy” Vershbow, a distinguished fellow at the Atlantic Council’s Scowcroft Center for Strategy and Security. He served as the United States’ ambassador to Russia from 2001 to 2005.

“Four years later, Russia has done nothing to undo the damage it has done. President Trump should better focus his energy on rebuilding trust and cooperation with the other six members of the G7, rather than seeking a seat for a revanchist Russia.”

Image: US President Donald J. Trump spoke to reporters at the White House in Washington before departing to attend the G7 summit in Canada on June 8. (Reuters/Kevin Lamarque)