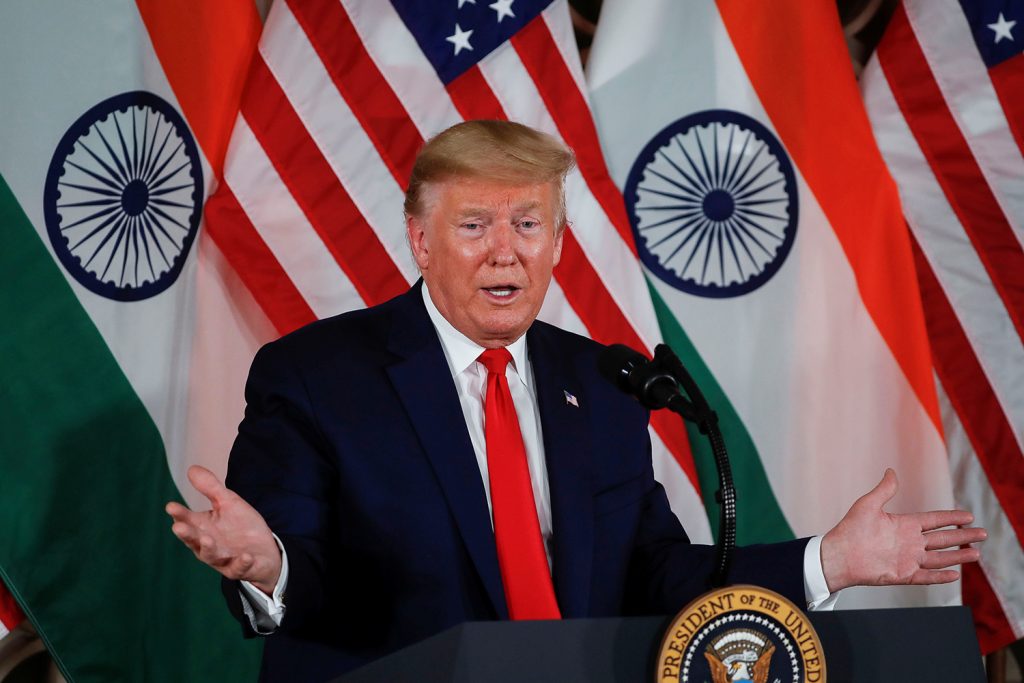 Disappointment and confusion were palpable among trade observers earlier on February 25 as the United States and India failed to meet high expectations for a modest bilateral trade deal, even as President Donald J. Trump and Prime Minister Narendra Modi predicted much bigger things to come. There was disappointment, perhaps not least among line negotiators on both sides, because a deal seemed so close, almost inevitable.

There had already been one failed attempt in the run up to the meeting between the two leaders in New York in September on the margins of the United Nations General Assembly.  Since then most observers—including this one—had noted steady progress, and the two sides forecasted that a trade deal would be the headliner for a Trump visit to Delhi.

There was confusion, however, because the lofty predictions by the two leaders of a “very big deal,” a “comprehensive” deal, a “phase one” agreement leading to a “comprehensive” one, etc., did not quite fit with the reality on the ground. After nearly two years of negotiations—with the occasional set-piece dramas—a modest trade agreement was abandoned, reportedly because President Trump was not ready to restore India’s benefits under the US Generalized System of Preferences (GSP) tariff program.

As the dust settles following another historic presidential visit to India, which was long on political ceremony but short on substance—and marred by the tragic violence that unfolded in northeast Delhi—a central question is what comes next on the trade front. Will the two sides reengage on the negotiating agenda that they failed to conclude in the runup to the trip? Will they turn to other issues that had been sidelined during negotiations on a mini deal, such as intellectual property rights? Will they begin the groundwork for initiating negotiations on a comprehensive free trade agreement? Or all of the above?

Hopefully the two sides can and will reengage on the agenda that was already on the table. Unfortunately, it will be more difficult. The two negotiating teams have already conducted what likely has been the most intensive bilateral trade negotiation between them ever over the last two years, and failure under the circumstances of having a clear deadline—in this case, Trump’s visit to India—is rarely reversed “promptly” (as called for in the joint statement) in trade negotiations. Additionally, if Trump is averse to reinstating India’s GSP benefits, it is hard to see how a phase one agreement can be concluded. This was the quid pro quo for a variety of market opening commitments by India as part of a deal, and it is reasonable for India to expect that to be the case going forward.

GSP has its shortcomings; in some respects, its very existence has made it more difficult to conclude new multilateral tariff-cutting agreements in the World Trade Organization (WTO). But if the real motivation of the Trump administration is to de facto graduate India from the program, that likely runs counter to the intent of Congress in legislating it and clearly would be a deal killer.

The United States and India certainly should turn to other issues in their future engagement on trade. With all of their focus on a handful of issues, mostly involving market access for bilateral trade in goods, the two sides allowed other important issues to fester, and perhaps the best opportunity to begin to develop a record of incremental confidence-building trade outcomes  will be found in these areas, such as intellectual property rights, digital services, and better protection and promotion of investment through more transparent and predictable regulatory approaches. This author highlighted these possibilities in a recent opinion piece that predicted conclusion of a first trade deal during President Trump’s visit. While regrettably that projection proved too optimistic, these other trade-related areas remain ideal candidates for future bilateral work. For example, increased investment flows between the United States and India will be essential for expanding trade and integration between their two economies, and arbitrary regulatory actions that allow no opportunities for consultations with affected stakeholders do not contribute to a friendly investment climate.

Finally, might this be the moment for the United States and India to explore moving ahead with negotiations on a bilateral free trade agreement (FTA)? Trump and Modi’s comments were not explicit on this possibility, but they suggested a level of ambition that could be interpreted to involve plans for a future FTA. In fact, it should be clear that now is not the moment to be entertaining this possibility. FTAs are rarely easy to conclude and generally can take years of negotiations. India has engaged in stop-start FTA negotiations with the European Union for over a decade, and it is not even clear whether those negotiations remain ongoing. The last truly comprehensive, new FTA negotiation concluded by the United States was the Trans-Pacific Partnership (TPP), which it abandoned soon after the Trump administration took office. Even a negotiation on something akin to the recent US-Japan agreement, which fell far short of a comprehensive one, would seem quixotic. As the Modi administration continues to look for effective government policies to right its economic ship, it is unlikely to be interested in conducting negotiations on a broader set of industrial and agricultural tariffs than were to be included in a mini deal.

Going back to the original proposition of what comes next on trade, it seems that all of the above—reengage on the existing agenda; take up neglected issues, such as intellectual property rights, digital services, and investment; and begin to lay the groundwork for an FTA—is not the correct answer. Instead, two out of three would not be bad. Looking back at the history and trajectory of US-India trade relations, this approach certainly would be ambitious, but it would not be unrealistic. If “comprehensive” or a “really big deal” might mean an FTA, that clearly is a bridge too far for the moment.

Sixty years after US President Dwight D. Eisenhower traveled to India to mark the beginning of the US-Indian relationship, the close ties between Delhi and Washington today “would scarcely be recognizable to Eisenhower’s contemporaries,” Ambassador Alice Wells, US acting assistant secretary of state for South and Central Asia, said on December 11.

Image: US President Donald Trump speaks during a business roundtable in the Roosevelt House at the U.S. Embassy, in New Delhi, India, February 25, 2020. REUTERS/Al Drago