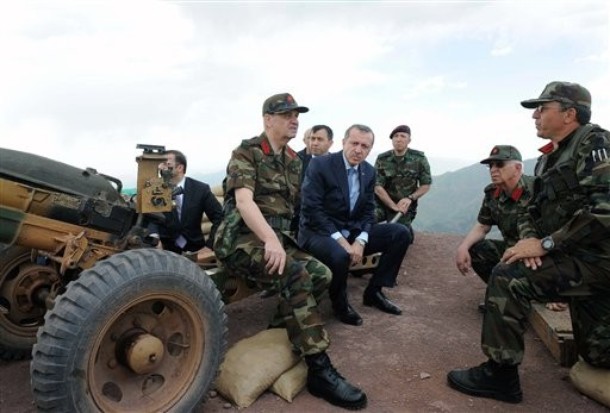 Geopolitical tectonic plates began grinding menacingly five years ago when Turkey embarked on negotiations for membership in the European Union but it didn’t take long for Ankara to conclude that EU was play acting.

There was little appetite for adding 70 million Turkish Muslims (80 million by the end of a projected 10-year negotiation) to the EU’s 20 million Muslims (Pakistani Brits, North African French, Turkish Germans). Church attendance in Europe is in steep decline while thousands of mosques are filled to overflowing.

In 2003, Turkey demonstrated that its close alliance with the United States in particular and the NATO alliance in general couldn’t be taken for granted.

As the U.S. 4th Infantry Division was about to disembark in Turkey and transit to Iraq to be part of a pincer movement on Saddam Hussein’s regime, Ankara said no and the pincer collapsed. The 4th ID was rerouted around the Arabian Peninsula to Kuwait. Paul Wolfowitz, U.S. deputy defense secretary at the time, in a preparatory conference with Turkish leaders, had misread the signals.

Turkish leaders, like many others around the world, had a hard time understanding the motives behind U.S. President George W. Bush’s decision to invade Iraq. Iraq’s Saddam Hussein, stripped of diplomatic gobbledygook, was the West’s best defense against the Iran of the mullahs. Iraq and Iran had fought an 8-year war (1980-88) to a Mexican standoff (a confrontation that neither side can foreseeably win) that had cost 1 million casualties on both sides.

For years Turkey was the only Muslim country to recognize Israel. A close military alliance was part of the relationship. The Israeli air force could use Turkish air space for training. It was also valuable space for an Israeli attack on Iran’s nuclear installations.

But all that changed overnight from close friends to antagonists heading for the brink of enmity. The detonator was the Israeli invasion of Gaza in December 2008 and January 2009 that killed 1,400 Palestinians and 13 Israelis.

And the break in Turkish-Israeli relations came when Israeli commandos boarded a flotilla of Turkish vessels bound for Gaza with relief supplies. Israel branded the civilians aboard as activists in the Islamic group Insani Yardim Vakfi, on par with al-Qaida. But it’s also a key supporter of Prime Minister Recep Tayyip Erdogan’s ruling party.

Erdogan’s warm embrace of Iran’s Mahmoud Ahmadinejad in Istanbul as "a dear friend" and his opposition to further sanctions against Iran (voted by the U.N. Security Council June 9) marks Turkey’s new "BlackBerry diplomacy," a break with conventional diplomacy — when major shifts take place in real time above the heads of foreign policy officials and the diplomats they normally deal with.

Erdogan declines to call Hamas a terrorist organization. And he no longer sees Turkey’s role in NATO as a priority. And to make sure there was no possibility of the country’s military staging what would be a fifth coup since 1960, a group of 52 military commanders were arrested last February. They were allegedly planning to blow up mosques as a signal for the military to overthrow the Islamic-oriented government.

The bottom line, as explained off the record by politicians, academics and journalists in Istanbul this week, is that Erdogan doesn’t believe this will be America’s century as was the 20th; that the geopolitical balance of forces is shifting east; that it is Turkey’s role to assume a leadership position in the Middle East that would be designed to bridge the gap between Sunni and Shiite Islam (Turkey is 80 percent Sunni).

Erdogan also is thought to believe he can persuade Iran to suspend its secret nuclear weapons program just shy of making a bomb or missile warhead. Instead, Iran would follow the examples of Japan and Brazil, countries that have the wherewithal to produce such a weapon in six months.

Erdogan, like most world leaders, had high hopes for U.S. President Barack Obama. But now they see he is unable to master a dysfunctional system of government; that he may lose one or even both houses of Congress in November; and that Afghanistan appears to be headed for another debacle comparable to Vietnam circa 1975 (when Congress stripped South Vietnam of military aid, inviting North Vietnam to administer the coup de grace). Turkey still maintains 1,750 soldiers in Afghanistan, albeit in a non-combat role to train Afghan soldiers.

One cynical Turkish ex-foreign minister, speculating about the Afghan war, confided, "The way things are going, your Congress will have made Afghanistan secure for China to make a deal with a new Taliban regime to exploit the $3 trillion worth of minerals verified by U.S. intelligence."

Turkish officials who see the global balance of power trending eastward can also see over the horizon a great Turkic nation that spans most of central Asia. For them, this is a more exciting vista than a slow NATO retreat from Afghanistan. Or a European Union, where Turkey’s nemesis Greece, the sick man of Europe, almost collapsed the painfully erected House of Europe.

Arnaud de Borchgrave, a member of the Atlantic Council, is a senior fellow at CSIS and  Editor-at-Large at UPI. Photo credit: AP Photo.