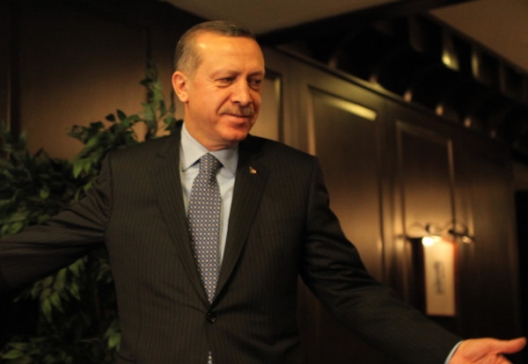 For the second time in two months, Turkish Prime Minister Recep Tayyip Erdogan’s government is clashing with secularists and opposition forces. The latest clash brings to the fore the question of whether Turkey will remain democratic, or if it is descending into authoritarianism. While the ruling Justice and Development Party (AKP) rightly emphasizes that it is the legitimately elected government of Turkey, its actions speak louder than words or votes. Those actions show a slow but inexorable march towards authoritarianism in Turkey.

The focal point for this latest clash is the Ergenekon trials, a series of trials involving nearly 300 people accused of belonging to a shadowy “deep state” and terrorist network plotting to overthrow the government. Hundreds of people, including former army chief General Ilker Basbug and other military officers, three sitting members of parliament, professors, and journalists were convicted and sentenced recently. The verdict has sparked a new series of clashes between the police and protesters, with the Turkish riot police once again using water cannons, tear gas, and rubber bullets to disperse crowds.

The veracity of the charges is unknowable. The sheer scope of the trials – nearly 300 people that include opposition politicians, military officers, and journalists – strikes a chord of government rationales to jail dissident voices. However, Turkey has a long history of military coups, so Erdogan and any elected government live with the specter of another military government takeover. Taken by themselves, the recent trials and sentencing are overzealous, but perhaps understandable given Turkey’s history, and the charges may be real. However, these trials did not occur in a vacuum.

Already more than 300 Turkish military officers have been convicted in conjunction with this coup plot. Three former army generals were also convicted and sentenced to twenty years in September 2012. The convictions of literally hundreds of officers, up to and including the former Army chief, have the secondary effect of decreasing the power of the biggest threat to Erdogan’s power: the military. While increasing civilian control of the military is often considered a positive move for a country, it can also lead to the politicization of the armed forces, where the officer corps is purged of all but those loyal to the leader or party. That may or may not be the case here, but it is a possibility.

Erdogan’s suppression of voices of dissent was seen as recently as two months ago with the mass protests in Taksim Square and across Turkey. What was most disturbing about Erdogan’s treatment of the protests was not the police brutality, which can occur in even the most mature democracies such as the United States, but his dismissal of his opponents as “arm-in-arm with terrorism” and organized by extremist elements. By calling the protesters in league with terrorists, Erdogan and his government are essentially delegitimizing criticism of his regime; organized protests are on the equivalent level of subversion as acts of violence against the state. Delegitimizing one’s detractors as enemies of the state is a dangerous step towards forbidding all dissent.

These are only some of the extremely visible changes Turkey is undergoing. Journalists have also taken the brunt of the Turkish government’s policies. Turkey is one of the world’s leaders in jailing journalists for criticizing the regime. Other journalists who are critical of the regime are fired, rather than jailed, which is still a problem for the maintenance of free speech, arguably one of the more necessary criteria for a democracy to flourish.

Most insidious and problematic in the long-run, Erdogan is attempting to change the Turkish constitution to give greater powers to the president, and then plans to run for president when his current term is up. These constitutional changes look suspiciously similar to Russia under President Vladimir Putin, which is not exactly a model democracy.

Democracy is a tricky thing. Balancing the rights of minorities, the will of the majority, and the leadership of the elected executive is a herculean task, and no country has managed it perfectly. But once the leader’s voice not only trumps the others, but actively works to undermine, imprison, and otherwise silence any contrary voices, it is no longer a democracy.

Turkey has been the success story of the Middle East for the past decade, under Erdogan’s leadership. It is tragic to think that the same man who helped make Turkey a model for democracy in the Middle East is in the process of destroying it. No one set of trials, or protests, or constitutional change mean the end of democracy. But when actions like these occur over and over again, led by an unapologetic leader, it becomes not an aberration, but a trend. And Turkey is showing a clear trend that leads to the death of democracy and the rise of authoritarian rule under Erdogan and the AKP.

Kathryn Alexeeff is a research assistant with the South Asia Center. This piece first appeared on VOA’s Middle East Voices.