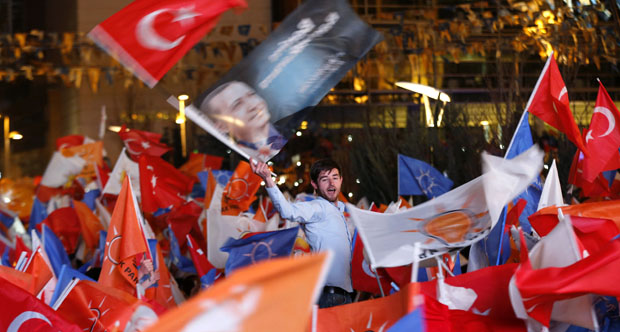 With more than 98% of the votes counted by midday Monday in the March 30 Turkish municipal elections,  Prime Minister Recep Tayyip Erdoğan and his ruling Justice and Development Party (AKP) clearly had won their eighth straight victory in national voting contests (three general election, three local elections, and two referenda) since they first won in 2002. As Erdoğan and his rivals now prepare for two more elections — a presidential vote in August and parliamentary vote that must be held by next spring, Turkey will spend 2014 more divided — along political, sectarian, and ethnic lines — than it has been in recent history.

The chart below shows the percentages for the popular vote during the past four elections in Turkey (with 2014 results still unofficial, as reported by CNN Turk).

These results mark the highest percentage of votes the AKP has received nation-wide in a municipal election since coming to power twelve years ago.  The percentage drop in AKP votes from the 2011 general election is widely attributed to the high-level corruption scandals, involving several cabinet ministers and the prime minister’s close circle, which have shaken the country since December. A number of analysts, and certainly the two main opposition parties, were expecting the scandals to have a much greater drag on the AKP vote totals. Erdoğan seems to have chosen, once again, the most effective themes for his election campaign – notably protecting the country from external and internal enemies and from attacks on its national security – to overcome the corruption allegations and hold the AKP’s voters.

Perhaps more important than the overall totals is that the AKP again won the mayoral races in Istanbul (where Erdoğan himself was the mayor before becoming prime minister) and Ankara, the capital and the second-largest city. The AKP added a few more mayoralties in other key cities, such as Antalya, the coastal tourism center  on the Mediterranean. Istanbul, Ankara, and Antalya are extremely important to the AKP’s future, since some of the largest infrastructure and real-estate development projects are set there.

The main opposition party, the Republican People’s Party (CHP), founded by Mustafa Kemal Atatürk, held onto the mayoralty of İzmir, Turkey’s third-largest city and the long-term fortress of the social democrats. The consequences of the defeat of Mustafa Sarıgül, CHP’s mayoral candidate for Istanbul, is not immediately clear. He failed to substantially increase the CHP vote in Istanbul and thus his ambition to lead his party will face uncertainty. The CHP now faces a major soul searching prior to the August presidential elections.

In his victory speech at party headquarters in Ankara, Erdoğan referred to his popular “war of liberation” theme and vowed to continue his war on the enemies of Turkey, in particular against the social movement of the Pennsylvania-based Islamic cleric, Fethullah Gülen. He made a special reference to Syria, which he declared is currently at war with Turkey. His overall tone was not as conciliatory as it has been in his previous victory speeches.

Yesterday’s results, which many also regarded a national “vote of confidence” for Erdoğan, seem likely to give him enough support to run for the presidency in a vote scheduled for August. They also strengthen his hand in the battles he has fought, since the December corruption scandal broke, against Gulenist supporters in the Turkish bureaucracy and judiciary. Thus reinforced, Erdoğan  is very likely to accelerate his purge of Gulenists in all ranks of the government bureaucracy – including  judges, prosecutors, police, academics, teachers, etc. – and even in segments of the private sector.

Another potential beneficiary of Sunday’s results appears to be the pro-Kurdish Peace and Democracy Party (BDP). It won nearly all of the large municipalities in the southeast and increased its total vote over that in recent local elections. Erdoğan or any other AKP candidate will need to woo the support of the BDP and its voters during the presidential contest.

Erdoğan likely will meet President Gül in the next weeks to discuss AKP strategy for the presidential election. And the possibility now increases for the general elections, now scheduled for spring 2015, to be moved forward either to be held with the presidential vote or shortly afterward. The country is likely to witness harsh and confrontational election campaigns as opposed to ideological or policy-driven ones.  Any radical changes in the economy or regional political developments before the summer will have major effects on the upcoming elections – and all parties are well aware of this fact.

Orhan Taner is director of the Atlantic Council’s Istanbul office.