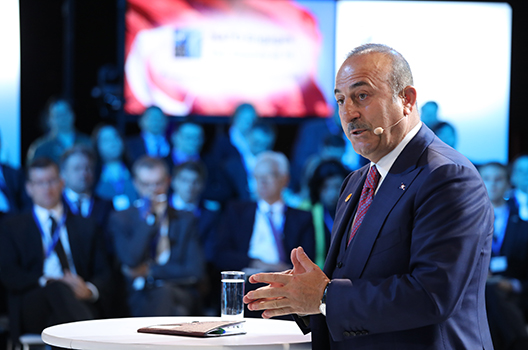 Turkish Foreign Minister Mevlüt Çavuşoğlu on April 3 insisted that Ankara will not bow to US pressure to scrap a deal to buy a Russian missile defense system and said mixed signals on Syria from the United States show that the administration does not have a coherent strategy.

The Trump administration has prevented Turkey from receiving equipment related to the F-35 fighter jet until Ankara cancels an order of the Russian S-400 Triumf missile defense system, which it says would compromise the security of the F-35.

Çavuşoğlu insisted that Turkey’s purchase of the S-400s is a “done deal and we will not step back.”

Turkey, he explained, has an urgent need for missile defense systems given the threats in its neighborhood. “NATO,” he added, “is not capable enough to cover our airspace yet.”

Speaking at NATO Engages, a daylong conference hosted in Washington by the Atlantic Council, the German Marshall Fund of the United States, and the Munich Security Conference in partnership with NATO’s Public Diplomacy Division, Çavuşoğlu said US President Donald J. Trump had promised his Turkish counterpart, Recep Tayyip Erdoğan, that he will do his best to resolve the rift between the United States and Turkey — two NATO allies — over the sale of the F-35s.

“[Trump] promised Erdoğan that he will take care of this issue. And he is the president of the United States,” Çavuşoğlu said, adding that the US president had promised to go ahead with the sale of F-35s to Turkey contravening the Pentagon’s decision.

Turkey has ordered thirty F-35 jets. It has received two, which are currently being kept at Luke Air Force Base in Arizona where Turkish pilots are training. Now this order may be in jeopardy.

“The United States has been clear that Turkey’s acquisition of the S-400 is unacceptable,” acting Pentagon spokesman Charles E. Summers Jr. said in a statement on April 1.  “Should Turkey procure the S-400, their continued participation in the F-35 program is at risk,” he added.

The Turkish foreign minister, referring to a recent phone call between the two presidents, said Trump had also blamed the Obama administration for not offering to sell Patriots to Turkey. Çavuşoğlu did not say when the phone call took place.

Turkey earlier this year rejected a US offer to sell it one Patriot missile defense system because, as Çavuşoğlu said, the offer did not guarantee that Turkey would receive the Patriot.

While the S-400 is not compatible with NATO’s defense systems, a point made by US officials, the Turkish foreign minister said: “No, it doesn’t have to be integrated to the NATO system, and this is not our aim… This is for our own use.” He said Turkey had proposed that the United States set up “a technical working group to make sure that this system will not be a threat, neither to the F35 not to NATO systems.”

In a background briefing on April 2, a senior State Department official said Turkey could face US sanctions if it went ahead with the purchase of the S-400s.

“We have made very clear to Turkey that its acquisition of the S-400 will result in a reassessment of Turkey’s participation the F-35 program and risk other potential future arms transfers, as well as potentially trigger sanctions by the United States. That is what we’ve made clear to Turkey and that’s been our consistent message to Turkey across the board, from the Pentagon, the White House, and the State Department,” the State Department official said.

Çavuşoğlu, however, rejected the suggestion that Turkey could be subjected to sanctions noting that the S-400 deal was finalized before the specific US sanctions legislation — Countering America’s Adversaries Through Sanctions Act (CAATSA) — came into effect.

“It is our joint obligation to explain the situation to the Congress,” he said.

In a conversation moderated by Margaret Brennan of CBS News’ Face the Nation, Çavuşoğlu discussed “Turkey’s Role in NATO and Regional Security Challenges.”

Asked by Brennan if he knew what the US policy on Syria is, Çavuşoğlu responded: “No, and this is the problem.”

Citing contradictory signals from the US administration and military, particularly on the presence of US troops, he said: “There is no clear strategy.”

After Trump announced in December that he would withdraw all 2,000 US troops from Syria — a decision that prompted the resignation of his defense secretary, James Mattis — the White House said in February that it would leave 200 US troops in Syria.

Çavuşoğlu said Turkey would prefer that all foreign troops leave Syria. He reiterated his government’s criticism of US support for Kurdish groups in Syria that Ankara considers terrorists. “Our problem is the US has been engaged with PKK, PYD, YPG terrorist organizations. We have been asking the United States to disengage with terrorist organizations,” he said.

On Turkey’s relationship with Russia and its potential impact on NATO cohesion, Çavuşoğlu argued that Turkey follows NATO’s dual-track policy of deterrence and dialogue.

While acknowledging a close relationship between Ankara and Moscow, the foreign minister contended that Turkey disagrees with Russia on a number of issues, including Russian aggression in the Black Sea region, its annexation of Crimea, and some of its actions in Syria.