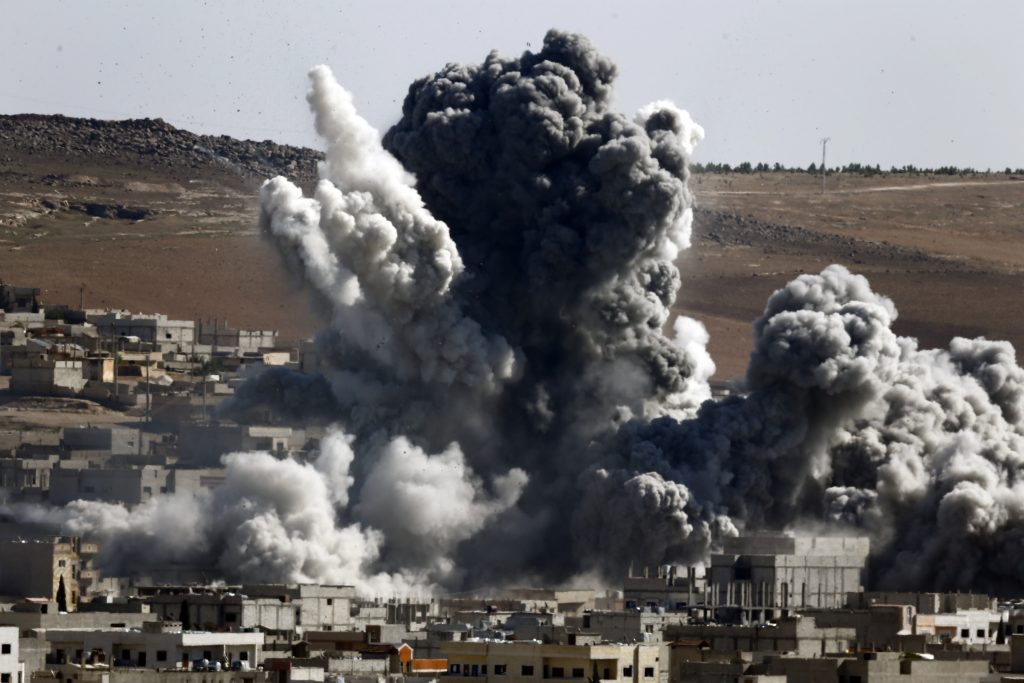 Turkey’s promise Monday to let Iraqi Kurdish guerrillas cross its border to defend the Syrian Kurdish town of Kobani against the Islamist army of ISIS provides a rare sign of hope for saving Turkey’s moribund peace process with its own Kurds. Turkey’s refusal until now to facilitate help for the Syrian Kurds’ fight has ignited riots and communal violence involving Kurds across much of Turkey.

Forty-eight hours later, none of those peshmerga fighters have been reported to have arrived in Kobani and it is unclear when or how Turkey’s promise will be fulfilled. Nor is it clear whether Ankara’s opening will be lasting enough to provide real help to Syria’s Kurds, or to put Turkey on a path to civil peace. But recent weeks have made clear the depth of the challenge to Turkey’s peace process. This month’s violence in Turkeyhas taken the country’s unresolved Kurdish Question back to the 1990s, when civil war between the state and the Kurdistan Workers’ Party (PKK) cost some 30,000 lives. As ISIS besieged Kobani, many Kurds perceived that the Turkish government preferred to help ISIS over the Kurds—and their consequent rage risks unraveling the fragile progress made since 2009 by Turkey’s democratic opening to its Kurdish minority.

Prime Minister Ahmet Davutoglu appeared to at least partly recognize the danger when he said October 19 that “there are two paths standing in front of Turkey’s region – the integration of people or painful clashes.” But Turkey now needs to go way beyond calling for Kurdish integration and committing to providing Kurds full equal rights. The United States and its NATO allies should press the government to fast-forward the Turkish-Kurdish peace process which has been stagnant for over a year; to avoid escalating the conflict with heavy police or military operations against its Kurds; and to truly open its border to direct shipment of weapons to Kobani’s defenders. Fighters linked to Turkey’s Kurdish movement should stick to their March 2013 ceasefire and take advantage of their newfound legitimacy to sell peace in Turkey to their followers.

Early this month, at least thirty-seven people were killed and 351 injured in Turkish towns and cities in just four days of riots and street battles over Kobani, Interior Ministry Efkan Ala told reporters. The hostilities started when Kurds burned down schools, administrative buildings, police stations and statues of the Turkish Republic’s founder, Kemal Ataturk. As usual the police reaction was robustly peppered with tear gas. But more worrying is the equally violent reaction of other machete- and baton-wielding extremists, both far-right nationalists and religious fundamentalists.

On 9 October in Gaziantep, for example, groups of reportedly knife-carrying far rightists, set fire to the local office of the pro-Kurdish Democratic Regions Party, and threw Molotov cocktails. Fighting left at least four dead. Recent weeks have also brought back to the spotlight Turkey’s Hizbullah, which two decades ago was suspected of doing some of the Turkish state’s dirty work against the PKK, killing and torturing with near impunity. Fighting in the city of Diyarbakir, reportedly between the PKK and Hizbullah’s legal Islamic Kurdish political party, Huda-Par, forced police to impose a curfew there.

Since 26 September, masked attackers, allegedly from the radical Islamist faction Muslim Youth have on several occasions violently attacked university students in Istanbul who had set up a stand on their campus to denounce ISIS atrocities in Iraq and Syria. This group may or may not be linked to ISIS sympathizers in Turkey who have clearly gained a foothold, until recently with little state opposition, recruiting fighters for its cause. ()

The Syrian civil war, raging just across the 500-mile (800-kilometer) border, has pushed about 1.6 million Syrian refugees into Turkey and raised Turkish communal tensions of various hues. Turkey has become a deeply divided society, where empathy for the “other” is in short supply and resorting to violence has become all too common.  The crisis around Kobani is sharpening these conflicts.

Take the statement on October 3 by President Recep Tayyip Erdogan, who appeared to equate the PKK with ISIS, saying, “It is wrong to view them differently, we need to deal to them jointly.” On October 12, the president vowed, “We will make them [the PKK] pay dearly.” Two days later, Turkish warplanes bombed alleged PKK hideouts in Turkey’s east, the first such military action since the start of the peace process.

Turkey has set steep conditions on any steps to help the Syrian Kurds defend themselves. From the US it has sought the creation of a no-fly zone in northern Syria and a wider campaign to fight the regime of Syrian President Bashar al-Assad. From the Syrian Kurds, many of whom are closely affiliated with the PKK, it seeks a firm commitment to join the ranks of the Syrian opposition Free Syria Army alliance and to sever ties with the PKK.

It is unclear that Turkey’s promise to let the Iraqi Kurdish peshmerga reinforce Kobani has lessened these demands. They are understandable, but fail to take into account immediate ground level realities, or the fact that Ankara itself is involved in talks with the PKK, via its leader, Abdullah Ocalan.

Ankara Should Broaden Opening to Kurds

Turkey’s tough conditionality on Kobani seriously undermines its reconciliation effort with the Kurdish movement at home. Since 2009 Ankara has been proclaiming a democratic opening with its Kurds. Fighting stopped, Kurdish-language television and private Kurdish language courses were allowed, plans to introduce education in Kurdish in private schools were made, and the strict isolation of the imprisoned PKK leader Ocalan, was broken with visits by family members and MPs. In the past weeks the Turkish government has been gradually unveiling a new “roadmap to peace”

But to many Kurds these are half-measures. They have evolved slowly and on the Kurdish side have involved only Ocalan and a few Kurdish members of parliament close to him. The steps so far have not addressed Kurdish demands such as amendments to the constitution to make it more inclusive of all the country’s citizens regardless of ethnicity, greater decentralization and changes to the anti-terrorism law, which still keeps thousands of non-violent Kurdish activists in pre-trial detention. Kurds also have sought the lowering of Turkey’s election threshold, which requires that political parties must win 10 percent of the nationwide vote to be awarded seats in parliament.

Ankara’s promise to let the peshmerga defend Kobani was a first step. The Kurdistan Regional Government (KRG) in Iraq, an increasingly close Turkish ally, has had deeply ambivalent relations with the Syrian Kurdish forces of the Democratic Union Party (PYD). That began to change after the PYD’s fighting arm helped push back ISIS fighters threatening the Iraqi Kurdish regional capital, Erbil. Over the past several years Turkey has pragmatically developed political and economic ties with the Iraqi Kurdish regional authorities to increase its influence and security in northern Iraq. Now it should use the same pragmatism and good sense to open its border to Kurdish fighters and weapons going to Syria. This could give a real positive kick to the peace process with its own Kurdish people.

Sabine Freizer is a non-resident senior fellow, based in Istanbul, of the Atlantic Council’s Dinu Patriciu Eurasia Center.

Image: The blast cloud of an airstrike boils skyward in Kobani, where US warplanes have attacked ISIS forces trying to take over the ethnic Kurdish town. The airstrike, and other fighting, was visible from Turkey’s Mursitpinar border crossing into Syria, and Turkish Kurds gathered there to watch the battle through binoculars. Turkey’s Kurds have rioted in cities nationwide over Turkey’s weeks-long refusal to let weapons or reinforcements cross the border for the defense of Kobani. (Reuters/Kai Pfaffenbach)