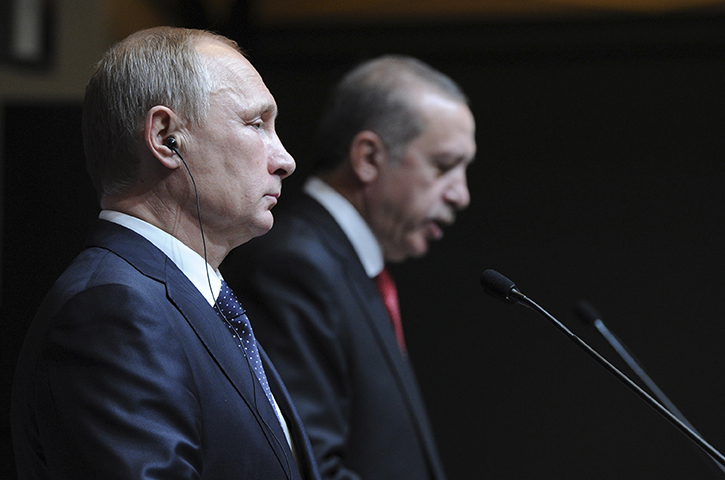 Russian President Vladimir Putin (left) and Turkish President Recep Tayyip Erdoğan, seen here in this 2014 photograph, restored bilateral ties between their two countries at the end of June. Ties were ruptured after Turkey shot down a Russian jet over the border with Syria on November 24, 2015. (Reuters/Mikhail Klimentyev/RIA Novosti/Kremlin)

Russian President Vladimir Putin announced on June 30 that he and Turkish President Recep Tayyip Erdoğan had agreed to restore bilateral ties between their two countries. Russian Prime Minister Dmitry Medvedev followed the announcement with his own statement that economic sanctions against Turkey would be removed “on a gradual basis.”

Meanwhile, plans to build a natural gas pipeline—known as Turkish Stream—under the Black Sea to bypass Ukraine remain on hold.  Russia halted negotiations on Turkish Stream after Turkey shot down a Russian jet on the Syrian border on November 24, 2015.  The originally planned 1,100-kilometer pipeline would consist of four lines designed to transport sixty-three billion cubic meters (bcm) of natural gas annually. Sixteen bcm was destined for the Turkish domestic market, while the remaining forty-seven bcm was for the European market. Combined with the Nord Stream pipeline, Turkish Stream would have eliminated the need for Gazprom—Russia’s chief energy giant—to use Ukrainian pipelines to supply the European market.

Turkish Stream had been in trouble before the Russian jet was shot down. In September of 2015, Gazprom Deputy Chief Alexander Medvedev announced the project was being scaled back to a single line to feed Turkey’s energy needs. “We agreed with the Turkish partners that first we will work on pipe number one, and then we will look to the others,” he said. Whether other lines would be built depended on European demand.

Turkey had been demanding a 10.25 percent price discount on Russian natural gas; Gazprom had refused to sign the agreement. According to Turkish Deputy Undersecretary for Energy Sefa Sadik Aytekin, this price dispute was impassable.

“We can’t move forward in the negotiations at the moment. Russia placed the gas discount talks between Gazprom and Turkey’s gas grid, BOTAS, as a prerequisite to the Turkish Stream project…The parties have not ended the talks, but frozen them,” he said in September of 2015.

Russia seized the jet incident with alacrity—using it as an excuse to halt negotiations that had ultimately not gone their way. According to Agnia Grigas, a nonresident senior fellow in the Atlantic Council’s Dinu Patriciu Eurasia Center, “Moscow’s pointing to the recent tensions with Ankara as the main reason for slowing down the Turkish Stream project is perhaps just a way of saving face when the costs of currently implementing it would be difficult for Russia to bear.”

Gazprom spokesman Sergey Kupriyanov has declared that the company is “open for dialogue” on the project, and Turkey is prepared to unfreeze negotiations. However, unless progress can be made on the underlying pricing issues, it appears the Ukrainian route will still be used. Even Putin seems to have acknowledged this reality. At the St. Petersburg International Economic Forum in mid-June, he said that contrary to previous official statements Russia would not phase out the Ukrainian route.