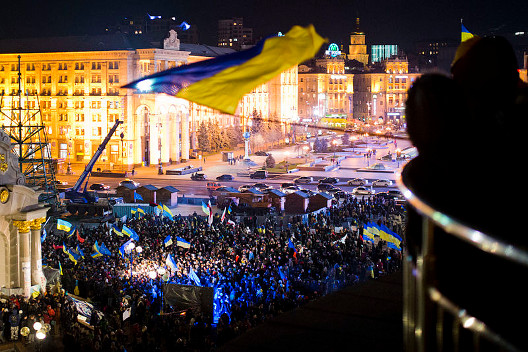 While it is very late in the game, it is not too late to return Ukraine to the path of European integration.

Hundreds of thousands of Ukrainians, enraged by President Viktor Yanu­kovych’s recent rejection of painstakingly negotiated trade agreements with the European Union, continue to protest Yanukovych’s apparent turn toward Moscow and the corruption and cronyism of his government. There is a clear danger that the demonstrations will escalate, bloodshed will ensue and Ukraine’s fragile democracy will unravel.

The Obama administration is doing a good job of crisis management — stressing the need to respect the right of peaceful assembly and urging calm — but that is not enough. It is essential for the United States to exercise strong leadership, reverse Yanu­kovych’s turn toward Moscow and spur Ukraine to reengage with the European Union, so as to honor the Ukrainian people’s clear civilizational choice. The administration must also reassure Ukraine’s neighbors, most of which — particularly Poland — view Yanukovych’s decision as a strategic disaster and an invitation for further misbehavior by Moscow in the region. But even as they do these things, US officials must direct their strongest efforts at Russia.

Russian tactics — President Vladimir Putin imposed trade sanctions and threatened to cut off gas supplies, in addition to offering substantial financial assistance — were too much for Yanu­kovych, whose country is in economic crisis. The next steps matter because Ukraine matters. A territory the size of France, it is strategically located at the crossroads of Eurasia, with a population of 46 million and great economic potential. Former president Bill Clinton and former secretary of state Hillary Clinton signaled their understanding of this strategic significance in September when they appealed to the Ukrainian government to resist Russian pressure and sign the EU agreement. During the annual Yalta European Strategy Conference, the Clintons eloquently described the high stakes for all concerned and said, “Ukraine should not have to choose between Russia and the EU”

To date, Russia’s actions have cost it not an economic or diplomatic penny in terms of its relationship with the United States and the European Union. Indeed, the Obama administration’s business-as-usual posture toward Russia was underscored by the fact that First Deputy Prime Minister Igor Shuvalov was in Washington in recent days, meeting with high-level administration officials to discuss the prospects of a bilateral investment treaty.

This must change. Moscow’s threats to harm Ukraine’s economy violated Russia’s World Trade Organization obligations and other agreements to which Russia is a party. They must be strongly challenged as unlawful. Moscow must be informed, first privately and soon thereafter publicly, that the United States will press for a broad range of measures, including WTO sanctions, Russian expulsion from the Group of Eight and even a boycott of the 2014 Winter Olympics by political leaders, unless Moscow abandons its strong-arm tactics toward Kiev. All of these measures would threaten what Putin values greatly: his international stature.

Meanwhile, the United States should continue to build on the protesters’ powerful appeal for a Ukraine-EU deal. The Obama administration should work with EU officials to chart a course of action that provides appropriate financial incentives for Kiev, such as tariff-free access to the EU market. They should engage the International Monetary Fund and other international financial institutions to put together an assistance package for Ukraine to offset the one put forward by Moscow. Ukraine has indicated its willingness to accept a broad package of economic and political reforms. Negotiations on how to implement this commitment should be restarted. The EU requirement that Ukraine immediately release Yanu­kovych’s major political enemy, former prime minister Yulia Tymoshenko, from prison must be part of this process, but that should be negotiated in private.

The administration should make clear to Yanukovych that his legacy would be destroyed should he give in to Russian pressure. There is every reason to believe that Yanukovych, while sympathetic to Russia, would welcome an opportunity to continue his previous strategy of maintaining close ties with both the European Union and Russia.

US officials should recall the strategy used in 2004, when Ukrainian President Leonid Kuchma defied Moscow’s pressure to uphold fraud-tainted election results and allowed a legal challenge by the opposition that resulted in new elections. Ironically, these elections pitted Yanu­kovych, who was favored by Moscow, against the staunchly pro-Western Viktor Yushchenko. The key to success was assertive diplomacy by the United States and the European Union, particularly Poland.

Alarmed by the Ukrainian people’s continuing protests, Yanukovych may well be willing to reconsider his decision. Those protests should be inspiring a diplomatic offense by the United States and the European Union. Ukraine’s political and economic future and the European Union’s ability to provide stability in the post-Soviet space hang in the balance.

Paula J. Dobriansky is a senior fellow at Harvard University’s Belfer Center for Science and International Affairs. She was undersecretary of state for global affairs during the George W. Bush administration. She is on the Board of Directors of the Atlantic Council.