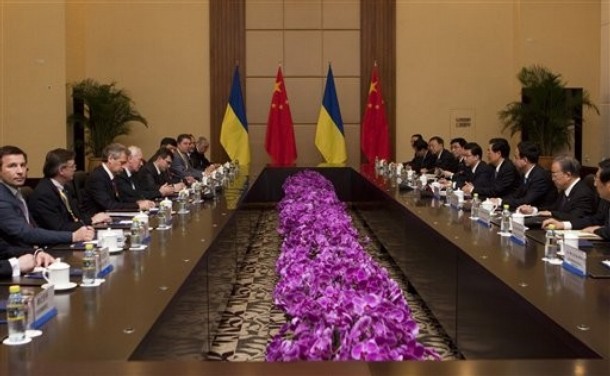 As Ukraine seeks to double its global grain export, Prime Minister Mykola Azarov used his visit this week to a trade summit in China as a platform to showcase his country’s agricultural investment and trade potential.

Despite recent chatter that Ukraine would impose stronger state control over its exports, China was enthusiastic, pledging to increase bilateral trade to ten billion dollars by 2012 in honor of their twentieth anniversary of diplomatic relations. In addition to trading agreements, Ukraine and China agreed to cultural exchanges in order to foster closer ties focusing on youth and student groups. Additionally, China and Ukraine already cooperate in the high tech industry and are now exploring ways in which their defense industries can further partner.

But China’s real interest in Ukraine lies elsewhere. While steel is Ukraine’s top export, its famous black earth gives Ukraine its nickname “the bread basket of Europe”–and now potentially China. Ukraine once produced one-fourth of total Soviet agricultural output, but after independence in 1991, output collapsed and has yet to fully recover. Bureaucratic red tape surrounded privatization in the 1990s and obstacles still remain for large agribusiness to become invested. Ukraine imposed a moratorium on the resale of the land titles granted to farmers after privatization.  While the absence of title transfer keep rental rates lower than their European competitors, western investors remain uneasy about investing without full land ownership. There currently is draft legislation slotted for 2012 which would lift the moratorium, further opening Ukraine to foreign investment.

Unlocking this reserve could prove to be the catalyst for a much needed economic turnaround. Ukraine’s geographic size (second largest in Europe after Russia), rich soil and strategic position bordering the Black Sea put it in a unique position for investment potential which has yet to be fully realized. If properly negotiated, the sale and development of this farmland could in fact bolster the flailing Ukrainian economy–which shrunk nearly 15% in 2009. Ukraine’s top agricultural exports include barley, wheat and sunflower seeds, all of which could provide China with the imports required to feed its ever-growing population. Meanwhile, China could provide Ukraine with much

After taking office in February 2010, President Viktor Yanukovych stressed closer ties with China as a key political aim for his presidency.   Few expected closer ties with China to be at odds with existing trading partnerships with Russia as they are Ukraine’s second largest trade partner. However, Ukraine last week refused to enter into a Moscow-led customs deal, of which Kazakhstan and Belarus are members, in the name of free trade and instead traveled to China to negotiate other trade agreements with key partners. Expansion of their trade network beyond their traditional partners could be one of the only ways for the Ukrainian economy to fully recover.

Chinese President Hu Jintao vowed to visit Ukraine in June to continue to foster the budding trade relationship. If high-level diplomatic exchanges continue and Ukraine can unlock its agricultural potential, it just might become the breadbasket of China.

Mary Micevych is the Assistant Director for Communications and Marketing at the Atlantic Council. Photo credit: AP Photo.