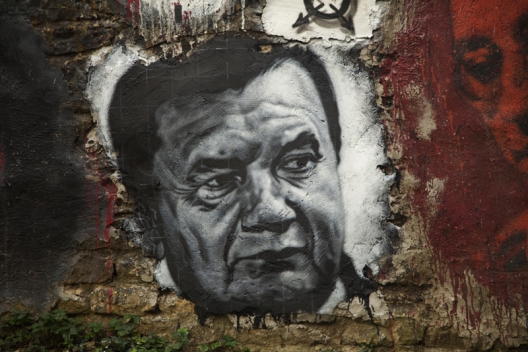 For a while it looked as if Ukraine’s embattled president, Viktor Yanukovych, had survived the political tidal wave that followed his decision to mothball the Association Agreement he’d hammered out with the European Union and instead to accept a lifeline from Russia (a $15 billion loan plus a one-third reduction in the price of natural gas) in order to manage Ukraine’s economic mess. Unlike the Association Agreement, which required thoroughgoing political and economic changes that would have undermined the crony capitalism and corruption that have been the hallmarks of Yanukovych’s political order, Moscow didn’t require any rock-the-boat reforms in exchange for the deal it offered on December 17. It was happy to have averted what looked like the start of Ukraine’s alignment with Europe and drift away from Russia. But Yanukovych overplayed his hand. No sooner had the dust started to settle, with Ukraine’s protesters figuring out what to do in the wake of Yanukovych’s deal with the Kremlin, than the Ukrainian parliament, controlled by Yanukovych’s party, passed a raft of laws on January 16 that effectively banned public demonstrations. The outrage that followed reenergized the protest movement, Kyiv’s Maidan bustled anew with protests, and clashes between the security services and demonstrators became routine. After three protesters were killed and reports emerged of others disappearing or being tortured, public anger boiled over and crowds began to surround, and even take over, government buildings in various parts of the country. Moreover, “People’s Councils” have sprouted in parts of central and western Ukraine, and some have outlawed the ruling Party of the Regions as well as the Communist Party.

One of Yanukovych’s big problems is that the mass movement is no longer limited to the central and western parts of Ukraine, where the antipathy toward him and his Party of Regions is strongest. True, these areas remain the most fervently opposed to the regime and to Russia and the most favorably disposed toward Europe. In eight western oblasts (provinces)—Volyn, Lviv, Ivano-Frankivsk, Rivne, Ternopil, Khmelnytskyi, Chernivtsi and Vinnytsia—the government now appears to exercise little, if any, control. But its position in Sumy and Poltava in the northeast seems equally shaky. Worse still for Yanukovych, demonstrations have erupted in various places in Ukraine’s Russophone Donbass region: Dnepropetrovsk, Odessa, Kharkiv and Zaporizhzhya. Though the government’s position remains relatively strong in the east, what’s becoming clear is that the opposition to Yanukovych has now become national in scope, even though a unified leadership does not guide it. The notion, which is commonplace, that what’s happening in Ukraine can be reduced to the country’s east-west divide is being revealed as simplistic.

Moreover, the protests are no longer, and indeed never actually were, just about the Association Agreement. The main sources of discontent have been the Ukrainians’ pent-up frustration over pervasive corruption and economic mismanagement, both made worse by Yanukovych’s failure to use the years since his election in 2010 to implement the reforms needed to jump start Ukraine’s economy and to strengthen the rule of law. So pervasive was Ukrainians’ disappointment with the Orange Revolution’s aftermath that Yanukovych had a golden opportunity to make things better. He squandered it. Now, even if he turns on a dime and decides to sign the Association Agreement, it’s going to be a case of too little, too late. The street feels that it now has the momentum and has Yanukovych on the ropes.

An added problem for Yanukovych is that there isn’t really anyone in the opposition with whom he can do a deal to calm the revolutionary waves. Whether as a genuine effort at conciliation or as ploy to divide the opposition, he offered last week to bring Arseniy Yatsenyuk, leader of the Batkivshchyna (Fatherland) Party, and Vitali Klitschko, who heads the Ukrainian Democratic Alliance for Reform (UDAR), into the government, as prime minister and deputy prime minister respectively. Neither politician accepted, and for three good reasons.

First, the protest movement’s rank and file has so soured on Yanukovych that both men would have lost considerable political capital had they joined his government. Second, since Yanukovych did not offer a post to Oleh Tyahnybok, who leads the far-right Svoboda Party, the latter would have denounced his competitors and presented himself as the only leader who cannot be bought. That’s not an outcome that Yatsenyuk or Klitschko wants. Third, in a political system that concentrates power in the hands of the President, whatever gains there are to be made by becoming Prime Minister (let alone a Deputy Prime Minister) are far outweighed by the risk of losing of public support by joining an unpopular government that appears to be living on borrowed time.

Time was when Yanukovych could have gained ground by releasing the jailed opposition leader Yulia Tymoshenko and perhaps sending her into a comfortable exile. But the time for that solution has come and gone. Whatever concerns Ukrainians may have about Tymoshenko’s own alleged corruption and her role in the failure of the post-Orange Revolution government, in which she served as Prime Minister, she remains Ukraine’s most popular politician. Given the political situation in Ukraine now, she would almost certainly reject any agreement that requires her to leave the country. Freeing her would further imperil Yanukovych because she has the charisma, and now the added prestige that comes from having been persecuted by Yanukovych, to galvanize the opposition to his regime. Yet his failure to release her continues to count against him. In short, when it comes to Tymoshenko, Yanukovych now faces a tough dilemma.

Then there’s the question of Yanukovych’s position within the state structure and the plutocracy. The longer this crisis goes on, the more likely that members of his government will jump ship and that the oligarchs most closely identified with him, the most prominent of whom is Renat Akhmetov, will start putting distance between themselves and Yanukovych. This is already clear from Akhmetov’s statement that force should not be used against the demonstrators and that negotiations are the only way out of the crisis. The defense minister, Pavlo Lebedyev, has made statement that the military will not be drawn into the business of suppressing the protests. That leaves the Berkut, the Interior Ministry’s riot police, who have earned the ire of the demonstrators for their brutality, and the street cops; but how long before the divisions in Ukrainian society seep into the security forces, leading to fraternization with the protestors or outright desertion?

The Russian government, having figured that it had short circuited the Association Agreement and succeeded in drawing Ukraine further into its sphere of influence, and perhaps into the Russian-led Customs Union (constituted now by Russia, Belarus, and Kazakhstan) and Putin’s projected Eurasian Union, now watches from the sidelines. Moscow has no good options. The situation in Ukraine is so chaotic that Russia has no means to create stability, let alone salvage the position of Yanukovych, who, in any event, becomes a diminishing asset by the day. The Kremlin, hyperconscious of its image as the Sochi Winter Games approach, won’t want to be seen using strong-arm tactics in Ukraine, and even were it so inclined, it’s not clear what pressure it could apply. Military intervention is out of the question. It would make Yanukovych’s plight worse and, in central and western Ukraine certainly, encounter massive popular resistance. Ukraine’s economy is a disaster and relies heavily on Russian gas supplies, but Georgia it is not, and there’s no chance that Russian troops would succeed in cowing the populace and reestablishing order.

Will Yanukovych agree to the opposition’s demand for early elections? That’s a possibility but he and his closest associates and family members will have to reckon with the possibility that what follows a victory by the opposition will be investigations into political abuses and corruption, trials, and jail time. It’s possible, in theory, to work out some sort of deal under which Yanukovych gets immunity from prosecution and is allowed to go into exile, but none of the opposition’s three key leaders (Klitschko, Yatsenyuk and Tyahnybok) will risk losing credibility by being the first to float such an idea given that it’s certain to be anathema to many of the demonstrators.

The odds that Yanukovych will survive this crisis have grown very long indeed.

Raja Menon is a nonresident senior fellow at the Atlantic Council, and holds the Anne and Bernard Spitzer chair in political science at the City College of New York/City University of New York.