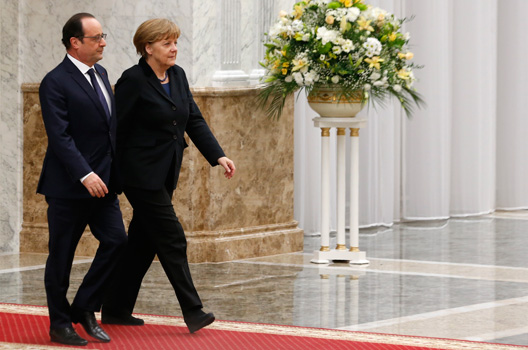 The leaders of France, Germany, Russia, and Ukraine are meeting in Belarus’ capital Minsk on February 11 to hammer out a deal to end the fighting in eastern Ukraine.

The meeting takes place against a backdrop of a worsening conflict as Russian-backed separatists made a push to take new territory and consolidate their strongholds in what was described as one of the bloodiest days in the war.

US President Barack Obama spoke on the phone with Russian President Vladimir Putin on February 10 and emphasized the “importance of reaching and implementing a negotiated settlement underpinned by the commitments in the Minsk agreement,” according to the White House.

Obama warned that if Russia “continues its aggressive actions in Ukraine, including by sending troops, weapons, and financing to support the separatists, the costs for Russia will rise.”

European Union foreign policy chief Federica Mogherini said the meeting in Minsk would be a “turning point for good or bad.”

Hopes for a lasting peace are slim. The rebels swiftly violated an earlier truce reached in Minsk in September.

If the talks in Minsk fail, the European Union will impose new sanctions on Russia and Ukrainian separatists.

The Obama administration is weighing whether to provide arms to the Ukrainian security forces — an option that has so far been opposed by Germany.

This is what Atlantic Council analysts have been saying in the lead up to the talks in Minsk:

John E. Herbst is director of the Dinu Patriciu Eurasia Center at the Atlantic Council:

“From conversations in London and Paris, I believe that the Europeans will not press Ukraine to make major new concessions in the Minsk talks. As one well-informed interlocutor put it, a new Minsk agreement – if reached – should not be more onerous for Ukraine than the earlier one.

“If President Putin decides, for tactical reasons, to accept a new formula that does not provide him additional advantages, focus will turn immediately to implementation. Washington and European capitals understand that Moscow did not fulfill any major commitment under the first Minsk agreement back in September.

“If President Putin agrees to a new peace agreement in the new Minsk talks… such a development might thus delay a decision by President Obama to send arms to Ukraine.”

German Chancellor Angela Merkel “needs to have this last, rather impressive bout of negotiations in order to bring her political constituencies with her should she chose after Minsk to make a different decision” on providing arms to Ukrainian security forces.

“I don’t think the Germans will arm the Ukrainians, but what we’re looking for is the fact that Americans arming the Ukrainians and others who may wish to does not cause a rift. German tolerance for that will be different if there is not a successful negotiation in Minsk.

“If there is a successful negotiation then great, but the proof will be in the implementation.

“I hope we will hold off making any decisions until after the dust has settled from Minsk.”

Image: German Chancellor Angela Merkel and French President Francois Hollande arrived in Belarus' capital Minsk on February 11 to take part in talks with the leaders of Russia and Ukraine to discuss ways to end the conflict in eastern Ukraine. (REUTERS/Vasily Fedosenko)