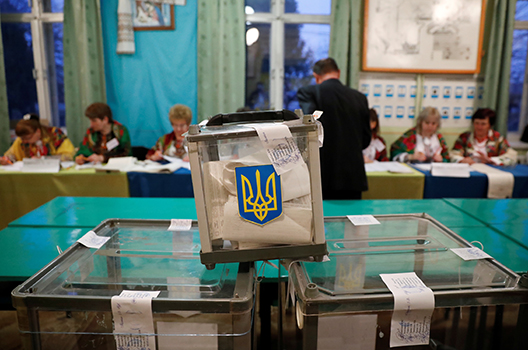 The outcome of the first round of Ukraine’s presidential election on March 31, in which a TV comedian received almost twice as many votes as the incumbent president, is a reflection of the level of “disenchantment” with the “state of domestic affairs,” according to John E. Herbst, director of the Atlantic Council’s Eurasia Center and a former US ambassador to Ukraine.

It showed that “while the country has united strongly to oppose Kremlin aggression, people hoped that the Revolution of Dignity would lead to major changes domestically and an improved standard of living,” Herbst said, referring to the 2014 revolution that led to the overthrown of Viktor Yanukovych’s government.

The presidential election is headed to a second round after none of the thirty-nine candidates won a majority of the votes. The top two vote-getters, incumbent President Petro Poroshenko and TV comedian Volodymyr Zelenskiy will face off again in a two-way contest on April 21. According to initial returns, Zelenskiy received about 30 percent of the votes while Poroshenko secured 16 percent. Yulia Tymoshenko, a former prime minister, finished just behind Poroshenko at 13 percent.

Poroshenko has been president of Ukraine since 2014 and has overseen Ukraine’s response to Russia’ illegal annexation of Crimea and military aggression in eastern Ukraine. On November 25, the Russian Navy seized three Ukrainian vessels in the Kerch Strait as they were attempting to access the Sea of Azov between eastern Ukraine and Crimea. The sailors are still in Russian custody.

Zelenskiy rose to political prominence for his portrayal of a teacher who suddenly becomes president in the television show “Servant of the People.” Zelenskiy’s campaign has been fueled by public dissatisfaction with the political class, corruption, and the ongoing conflict with Russia.

We asked John Herbst and Ukraine Alert editor Melinda Haring about the results of the first round and what to expect from the runoff. Here’s what they had to say:

Q: President Poroshenko is going to face Volodymyr Zelenskiy in a runoff. How do you explain Zelenskiy’s success?

Herbst: There is disenchantment in Ukraine with the state of domestic affairs. While the country has united strongly to oppose Kremlin aggression, people hoped that the Revolution of Dignity would lead to major changes domestically and an improved standard of living. There have been major changes as evident by serious reform in the gas sector, government procurement, and the banking sector; but some critics point to the very slow pace of change in the justice sector. Also, there were unrealistic expectations about improvement in the standard of living. Even the most successful economic transformations involve some hardship at first.

All of these things favored a new political face in the election. And Zelenskiy is that political face. The fact that he is a well-known comedian meant that he had name recognition, which is very helpful to a politician. But he also had nothing to do with the current state of political and economic affairs, which was a real advantage in round one of the presidential election.

Haring: Ukrainians are so sick of the same old faces and want results now. Zelenskiy is the perfect candidate: he plays a president on television who cuts off the hand of a corrupt MP and fires on the parliament. Of course, this is just silly television, but Zelenskiy has pledged that no one will get special treatment, to remove parliamentary immunity, and to support Ukraine’s anti-corruption institutions. He’s also got two serious reformers who know how to get the economy going that gave people confidence that he’s a real and serious candidate. However, he has no political experience.

Ukraine’s March 31 presidential election was a referendum on the incumbent. Ukrainians tell pollsters they are disappointed with the last five years and want change. Their bottom line has not improved, none of the high-level crooks from the previous era were jailed, and the war remains at a stalemate. Ukrainian voters are most concerned with the war, corruption, and the economy. Poroshenko gets good marks as a wartime president, but the economy is barely growing. At the beginning of the Poroshenko presidency, there was progress in fighting graft, primarily in the gas sector, but the fight fizzled. Poroshenko’s administration failed on judicial reform, and the courts remain unreformed. Investors aren’t stupid. FDI isn’t changing. The economy is beginning to grow, but Ukraine has become the poorest country in Europe over the last five years. At least two million Ukrainians have moved to Europe seeking higher wages.

Q: What is the current feeling toward Poroshenko in the country?

Herbst: He is not popular. People take for granted his excellent wartime leadership, but they associate him with their disappointment with the economy.

Haring:  He’s perceived as a strong wartime president who saved Ukraine on the brink of collapse, but one who failed to cleanse Ukraine.

Q: Where do the candidates stand on relations with the United States, the European Union, and NATO?

Herbst: Poroshenko has been a strong advocate of good relations with the United States and membership in NATO and the EU. He is well known in Washington and Brussels and leaders in the United States, NATO, and the EU are comfortable dealing with him.

Zelenskiy has yet to put together a national security team,; but he is unlikely to change Ukraine’s policies toward the West.

Q: Where do they stand on Russia, the war in the east, and Crimea?

Herbst: Poroshenko’s strong stand against Kremlin aggression is well known. Putin’s distaste for him is equally well known and Putin would like to see Poroshenko lose. Zelenskiy recognizes that Moscow is responsible for the war in Donbas. Like President Poroshenko, he demands the return of Crimea. But Zelenskiy lacks national security experience and Putin is likely to test him if he wins.  It is very important that Zelenskiy name a strong national security team if elected.

Haring: Both frontrunners say that Russia is responsible for the war and claim they want peace. There won’t be any change on Crimea regardless of who wins.

Q: What should we expect from the second round?

It will be a hard-fought contest with each candidate concentrating on the other’s weakest point. Zelenskiy will hit Poroshenko for the slow pace of reform in the justice system and Poroshenko will underscore Zelenskiy’s inexperience as a war leader.

Haring: Poroshenko will dig in on Zelenskiy’s weaknesses. Zelenskiy has no foreign policy or national security experts on his team. He also says that he’ll negotiate with Putin, which is perceived as a totally naïve position. Zelenskiy also has a big problem as he claims to be a genuine reformer but has a well-known oligarch behind him, Ihor Kolomoisky. Poroshenko is an oligarch himself. I also expect Poroshenko to play the nationalism card. Zelenskiy is from southern Ukraine and a Russian speaker.

We should expect massive mug slinging, dirty tricks, and perhaps some interference from the Russians, but I expect the Kremlin to play its tricks during the fall parliamentary elections.