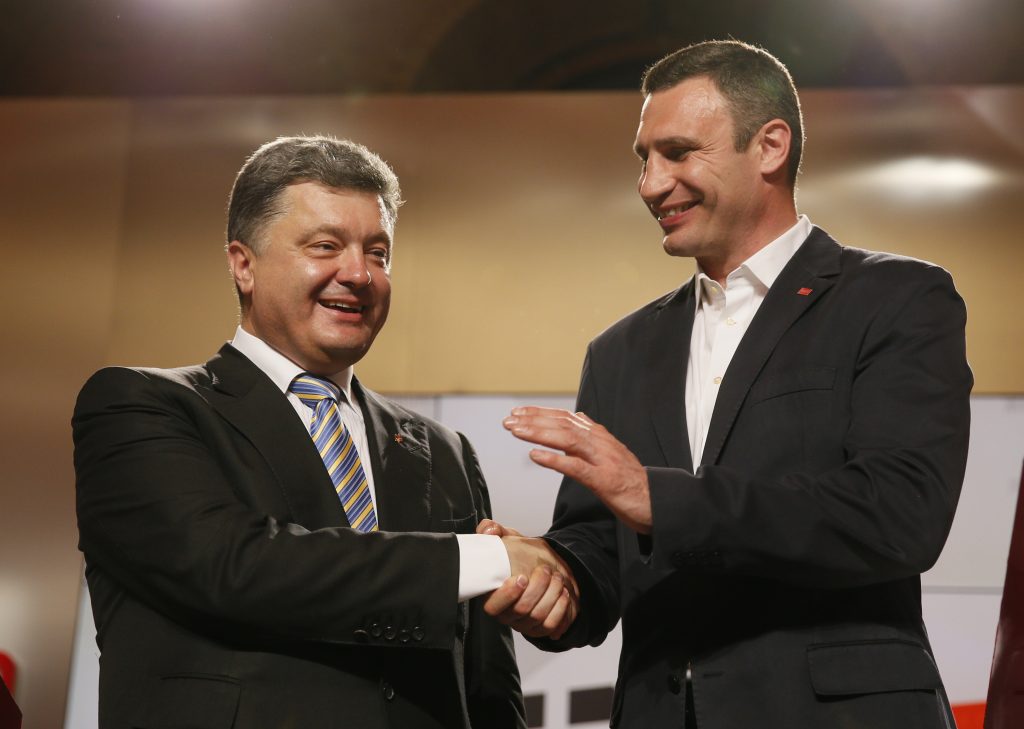 Presidential candidate Petro Poroshenko (left) and Kyiv mayoral candidate Vitali Klitschko celebrate after claiming victory in the May 25 elections. Klitschko withdrew from the presidential race and allied his UDAR party (the Ukrainian Democratic Alliance for Reform) with Poroshenko’s candidacy. Both men are seen as centrists. REUTERS/Gleb Garanich

Despite the Russian-led separatists’ efforts to disrupt Ukraine’s elections, Ukrainians went to the polls in large numbers and decisively elected Petro Poroshenko as president. Residents of Kyiv decisively elected Vitaliy Klitschko as mayor. These victories are significant for Ukraine’s European prospects. Specifically, they matter for several reasons:

First, the elections took place. It’s enormously significant that Ukrainian authorities conducted credible, free and fair elections that met international standards amid an atmosphere of tension, subversion, and threatened violence. In fact, given the stakes, Ukrainians turned out in large numbers to underscore their desire to ensure that the results were seen as legitimate within Ukraine and internationally. And despite separatist efforts to disrupt the polling in Donetsk and Luhansk provinces, which represent 14 percent of Ukraine’s population, many voters even there managed to vote. A number of residents of Crimea, illegally annexed by Russia, crossed onto the Ukrainian mainland to cast their ballots. These elections sap the Russian effort to question the legitimacy of Ukraine’s leaders, something even Russian President Putin seems prepared to concede.

Second, Ukrainian voters delivered decisive victories to the centrist candidates who forged an electoral alliance: Business magnate Petro Poroshenko for president and former boxing champion Vitali Klitschko as mayor of Kyiv. Both look poised to win by more than 55 percent of the vote, a massive margin underscoring their positions as unifying forces in Ukraine. Voters from across all demographic groups came together to back these two candidates. This was the first presidential election in Ukraine that did not yield a result that could be mapped like Ukraine’s traditional political divide, with one candidate winning handily in the east while another won decisively in the west. Poroshenko drew his support from across Ukraine.

Third, one of Ukraine’s newest parties has emerged as the party with momentum and as the odds-on favorite heading into parliamentary elections: UDAR – the Ukrainian Democratic Alliance for Reform. The party formed by Klitschko as his anti-corruption vehicle became the beneficiary of the Ukrainian voters’ rejection of the two long-dominant regional parties – Tymoshenko’s Fatherland Party in the west and Yanukovych’s Party of Regions in the east. Poroshenko, who had no party structure of his own, forged an electoral alliance with Klitschko. That transformed UDAR into Poroshenko’s national party structure, strengthening both the candidate and the party.

Fourth, Ukraine will now be led by pro-European political actors. While both Poroshenko and Klitschko strengthened their credentials through their participation in the EuroMaidan protests, they are centrist pragmatists who appeal to Ukrainians across the nation. While both intend to orient Ukraine toward Europe, Poroshenko in particular has experience in dealing effectively with Moscow (during his stints as foreign minister, economy minister, and chairman of the National Security and Defense Council).

Finally, the challenge Poroshenko and, to a lesser extent, Klitschko face is whether they can deliver a new Ukraine. They are not new faces or new actors in Ukrainian politics. Yet they have benefited from the voters’ rejection of the establishment. The question is whether they can govern Ukraine decidedly differently from their predecessors, beginning with a zero-tolerance approach to corruption and a durable commitment to reforms and transparency. Klitsckho, who unlike Poroshenko has never held public office, also must demonstrate that he is capable of governing effectively. And they likely will have to do this against the backdrop of an active Russian campaign that aims to ensure they fail.

If they begin well in coming months, they and therefore UDAR will likely be rewarded at the ballot box during the next parliamentary elections, and Ukraine itself may decisively advance down the path to a European future. If they fail, the very concept of free-market democracy will be in question in many Ukrainians’ minds.

Now is the time for the United States and Europe to invest heavily in their success.